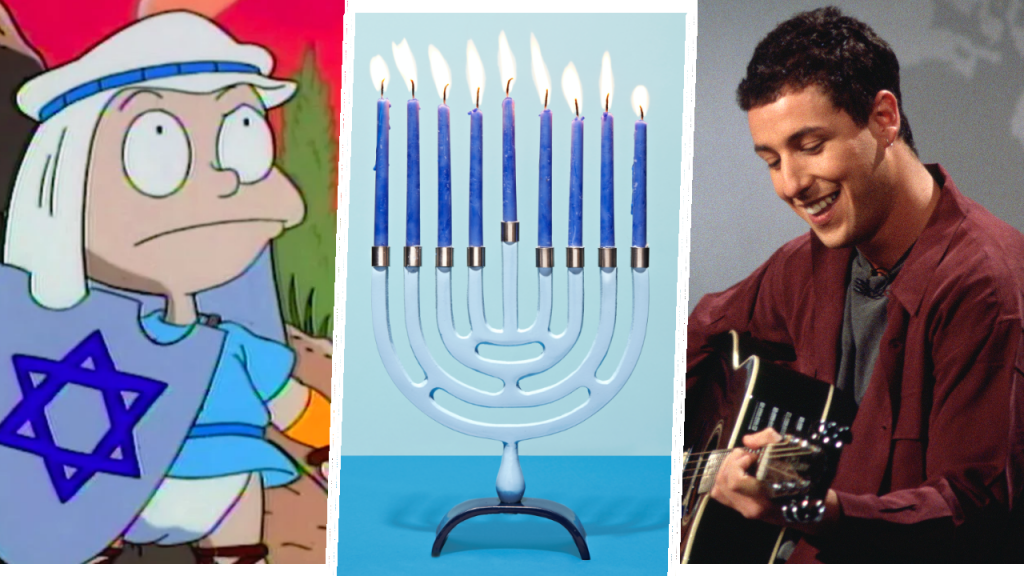 Happy Hanukkah, one and all! The Festival of Lights is upon us, but what exactly is the Jewish holiday? We’re glad you asked! The eight-day celebration commemorates the rededication of the Second Temple in Jerusalem, which occurred in the second century B.C. after the Maccabees revolted following its desecration by their Syrian-Greek oppressors.

Hanukkah is actually a lesser holiday in the Jewish tradition, but because it generally falls around the same time as Christmas each year, in modern culture, it’s become almost as big a celebration, because, hey, we’re big fans of getting presents too. In 2021, Hanukkah begins at sundown on Sunday, Nov. 28, and lasts through sundown on Monday, Dec. 6.

There’s a lot to know about not just the history of why we celebrate Hanukkah but also how it came to the forefront in not just the United States but Jewish households around the world. So, let us present you with 20 facts you may not have known about Hanukkah (and some you may know but provide excellent background, because we want to make you proud).

1. Whether you spell it Hanukkah, Chanukah, Hanukah, don’t worry about it — they’re all right. These are all English transliterations for the Hebrew word, which means as long as you’re pronouncing it right, you’re A-OK.

2. The word “Hanukkah” translates to dedication, which also helps explain the holiday. Each year, Hanukkah marks the rededication of the second temple in Jerusalem, when the Maccabees stood up against Antiochus and reclaimed the temple from the Greeks. Here’s what led to that: Judea, or the Land of Israel, fell under control of the Seleucid king of Syria, Antiochus III, around 200 B.C. He let the Jews who were living there continue to practice their religion, but his son, Antiochus IV Epiphanes, was way less cool, outlawing Judaism and demanded that the Jews worship Greek gods instead. A rebellion broke out, and though it took two years, Judah Maccabee, son of the priest Mattathias, helped lead the Syrians out of Jerusalem, aka the Maccabean Revolt. His followers then rebuilt and rededicated the temple.

3. Hanukkah never falls on the same date every year on our calendar, but that’s just because the Gregorian calendar (that’s what you’re using right now) and the Jewish ones aren’t in sync. Hanukkah is technically on the same day every year though: the 25th day of the month of Kislev on the Jewish calendar.

4. Hanukkah generally falls around the same time as Christmas, but it’s not really a holiday about gifts. Because of current society and melting pot cultures, gifts are given frequently on all eight nights, especially for young kids. Purim, a spring holiday, is closer to Christmas in the present-giving sense as far as Jewish holidays go.

The stunning Stagg electric kettle makes a great addition to any kitchen.

Gift your little one this adorable avocado Squishmallow plush.

Engrave a name or a special message on this chic plate bracelet.

Save 55% on this Coach designer crossbody bag.

5. Because the holiday falls near Christmas, it’s a common belief that Hanukkah is the most important holiday in Jewish tradition, but it’s actually not. Those would be the High Holy Days: Rosh Hashanah and Yom Kippur. In fact, Hanukkah isn’t even mentioned in the Torah. This is really because the whole miracle thing hadn’t happened yet, but it is mentioned in the New Testament when Jesus takes part in the “Feast of Dedication.”

6. Hanukkah lasts for eight days, and it’s also called the Festival of Lights, because when the Maccabees relit the menorah at the Second Temple, they thought they only had enough oil for the lamps to last for one night, but they miraculously burned for eight nights.

7. A menorah, which is what we use to light candles, has seven arms that are all at the same height. On Hanukkah, we use a version of a menorah called a Hanukkiah that holds nine candles. Eight arms represent each night of the holiday, while the ninth is the shamash, or the main candle that lights the others. Basically, a Hanukkiah is a menorah but a menorah is not a Hanukkiah — kind of like the whole square/rectangle thing.

8. Oil was traditionally used to light the flames of the menorah, but these days, we use special Hanukkah candles. You can buy them at any drug store, and we’re pretty happy about that.

9. Candles are lit from right to left. The first candle is lit on the far right, and one more candle is added each night until the final evening, when all eight candles are lit. We do this to symbolically relive the miracle of how the oil kept burning after the Second Temple was rededicated.

10. As important as the oil legend is, the first Hanukkah may have actually been a delayed Sukkot celebration. According to My Jewish Learning, they couldn’t properly celebrate Sukkot, an eight-day holiday, during the Maccabean Revolt. Because of this, the celebration got delayed until after the Temple was repurified following Jerusalem’s recapture. Sukkot is actually a very important Jewish holiday that includes feasting, prayers and festivities.

11. On the first night of Hanukkah, we say three blessings as the lights are kindled; after that, we only recite two for the remaining seven nights.

12. Dreidel is a fun game in which you can win gelt — either chocolate coins or real coins if you’re feeling lucky — but there’s an important meaning behind the centuries-old game. There are four Hebrew letters featured on each side of the dreidel: nun, gimmel, hay and shin. The four are an abbreviation for the Hebrew phrase Nes gadol haya sham, or “a great miracle happened there,” in honor of the rededication of the Temple. In Israel, they actually don’t have a shin on their dreidels; they use the letter peh instead because, in Israel, the phrase is “a great miracle happened here.”

13. But how did the dreidel come to be? There are a couple of different versions of this spinning top’s origins. Many scholars believe the dreidel was derived from teetotum, the English version of a top, and when it made its way to Germany, it was popularized by children there during holiday celebrations, where it was called drehen, or “to spin.” Eventually, Yiddish speakers changed the name to dreidel, and over time, the top began to acquire symbolism connecting it to Hanukkah. On the other hand, it is also believed that the dreidel was used so Jews could study the Torah while fooling the Greeks, as practicing Judaism back then was punishable by law. The idea is that they were teaching each other the Torah through oral study, but if the Greeks came upon these games, it just looked like gambling. No one’s sure if this is really true, but it’s a pretty fun tale nonetheless.

14. As for that gelt, the gold coins themselves have long been a part of playing dreidel, but the chocolate versions that are quite common these days have actually only been around for about 100 years. No one can really agree on if an American or Israeli candymaker came up with the idea, but gold coins also helped celebrate St. Nicholas in far older European Christmas celebrations.

15. It’s traditional to eat jelly donuts called sufganiyot during Hanukkah, as fried foods are another way to represent the oil that is so important to the holiday. It’s also nearly impossible to let the holiday go by without eating latkes, or potato pancakes. In Israel, 17.5 million donuts are said to be eaten over the course of Hanukkah.

16. Arguably the most popular modern Hanukkah song is Adam Sandler’s goofy, delightful “The Chanukah Song,” which made its debut on Saturday Night Live in 1994 and later appeared on his 1996 comedy album, What the Hell Happened to Me?. The song spawned a part 2 in 1999, part 3 in 2002 and part 4 (which includes a Drake shout-out!) in 2015. A Rugrats Chanukah is probably the other highly formative piece of pop culture for any Jewish kid who grew up in the ’80s or ’90s.

17. Though we’ve never had a Jewish president in the U.S., Hanukkah has been celebrated at the White House. In 1951, Harry Truman was gifted a menorah from David Ben Gurion, the first prime minister of Israel. Almost 30 years later, Jimmy Carter was the first president to recognize Hanukkah. He did so in 1979, but the first menorah wasn’t present outside the White House until 1989, when George Bush was in office. The first president to light a menorah was actually Bill Clinton in 1993.

18. Boston got its first-ever Hanukkah-themed pop-up bar just last year, the Maccabee Bar, which returned for a second iteration in the suburb of Somerville in 2019. Chicago and Austin, Texas, also joined the party with their own versions, called “8 Crazy Nights” and “Get Lit,” respectively. The coronavirus pandemic largely put the kibosh on pop-ups for 2020.

19. The world’s largest menorahs resides in New York City. After competing for years, both the boroughs of Manhattan and Brooklyn light up 32-foot tall beauties every year. Manhattan’s came first (and was thus dubbed the winner by a rabbinical court in 2016), standing tall in Central Park since 1973. The Brooklyn one came to be in Park Slope’s Grand Army Plaza in 1984. Why didn’t they try to inch each other out and keep going taller? Thirty-two feet is the maximum allowed height for a menorah by Jewish law.

20. A Hanukkah bush is not actually a thing, but many Jewish kids get to put up these mini trees anyway because our parents feel bad that all our goy friends get to decorate Christmas trees. It’s a very North American thing and generally discouraged by rabbis. That being said, there have been a few mentions of it in popular culture. Rabbi Joshua Eli Plaut discusses the concept quite a bit in his 2012 book, A Kosher Christmas: ‘Tis the Season to Be Jewish, where he cites a Jewish Messenger newspaper article from 1879 that uses the phrase and later discusses the secularization of Christmas in American homes. During an appearance on The Ed Sullivan Show in 1959, actress Gertrude Berg also mentioned that her dad put up a Hanukkah bush in their house rather than a Christmas tree.

And there you go! Have a very Happy Hanukkah and holiday season.

Holiday 2021 Shipping Deadlines Are Earlier Than You Think

30 Adorable Squishmallows to Shop Ahead of the Holidays

PrevPreviousCoach Outlet’s Black Friday Frenzy Is Still On: Save 70% and Take an Extra 25% Off Your Order
NextJon Gosselin Hospitalized After Venomous Spider Bit Him While He Was SleepingNext