2021 American Music Awards: The Best Moments and Biggest Performances of the Night! 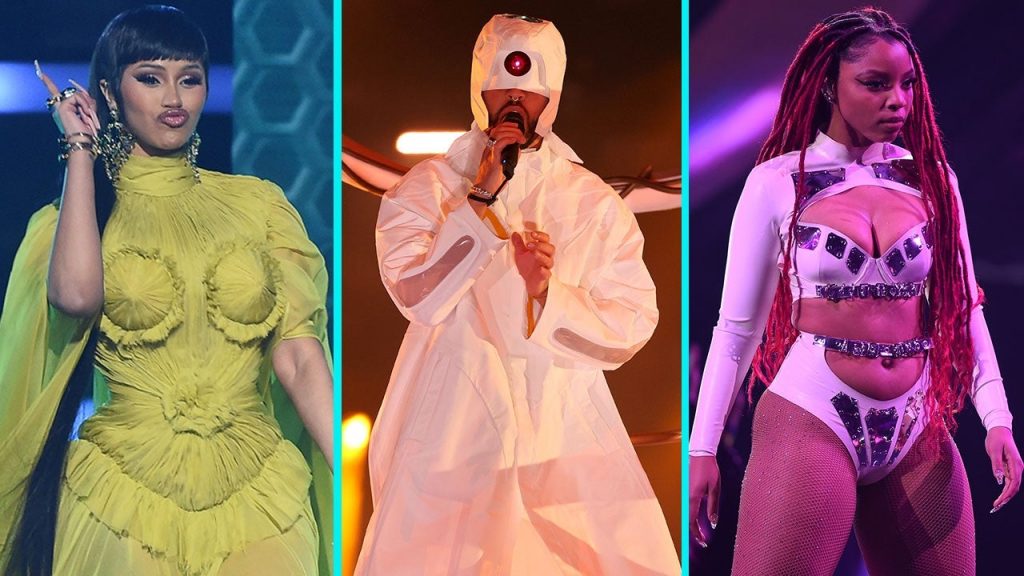 This year’s American Music Awards were a true celebration of art and spectacle! The star-studded extravaganza featured some of the biggest names in music being honored for their achievements and delivering some jaw-dropping live performances.

With Cardi B hosting the lavish affair, fans got a chance to see how a true moment-maker like the “WAP” songstress brings a spark of spontaneity and excitement to the role of emcee.

Amid the fun, jaw-dropping musical performances, viewers were also treated to a slew of heartfelt acceptance speeches and powerful messages from some of the night’s big winners.

Read on for some of the biggest moments from the 2021 AMAs!

Bruno Mars and Anderson .Paak kicked off the show with a bang, performing as duo Silk Sonic for a smooth, stylish number. Rocking crimson leisure suits and belting out a fan-pleasing performance of their smooth hit “Smokin Out The Window,” the pair set the bar high for the rest of tonight’s performers.

Cardi B Is Just the Best and Realest

The “WAP” rapper made her hosting debut at this year’s show, where she brought down the house with a dramatic ensemble and her signature humor. “Damn this crowd is loud,” she belted as she welcomed everyone to the 2021 AMAs. “I ain’t gonna lie. I’m a little nervous. I’m sweating.”

Later in the night, Cardi used her public platform to convince JoJo Siwa to come to her house this Christmas to delight her kids and JoJo had little choice but to enthusiastically agree. With Cardi as host, it feels like you never truly know what’s going to happen!

The 18-year-old singer stirred the emotions of everyone in the theater with her stripped-down, powerful performance of her single “Traitor.” With a guitar in hand, Rodrigo made her debut on the AMAs stage, delivering an acoustic version of the heartbreak ballad, letting the song’s gripping lyrics do the talking. Kicking things off in a free-standing doorway and surrounded by a field of flowers on stage, Rodrigo crooned the tune in a beautifully simple and delicate pink dress and toned-down makeup.

Bad Bunny, Tainy and Julieta Venegas went sci-fi and high-tech with their futuristic performance of “Lo Siento BB,” which is featured off of Tainy’s debut album, Data. With Venegas’ face appearing on the front of a cyberpunk-esque robot pianist and Bad Bunny rocking a sleek, all-white outfit with a head-covering mask featuring a HAL-9000-like red light on the front, every bit of the number was captivating.

Every time Chloe has hit the stage at an awards show since starting off on her solo path, she’s been making moments and delivering real spectacle. For her performance of “Have Mercy” at this year’s big show, Chloe kicked off the number by descending from the rafters on wires like an angel descending from heaven — then delivered one of the most masterfully and impressively risque performances of the night that proved how much star power she truly possesses.

The celebrated songstress and actress took to the stage to deliver the debut performance of her new song “On My Way,” which also serves as the main song for her upcoming romantic comedy, Marry Me. The 52-year-old superstar began her performance in a dramatic black gown sitting at a piano. She then did a quick and stunning outfit change, wearing a beige tulle dress with a veil. Scenes from the film flashed behind her as she belted out the deep lyrics.

It was unclear whether or not the Remember Her Name artist would even be able to perform at this year’s show, after her her son, Grayson, suffered a scary health issue earlier in the week that required him to spend time in the ICU. However, it seems that Guyton’s little boy has recovered, and the powerful country songstress delivered an incredible performance of her moving and inspiring tune “All American,” which earned a standing ovation from the audience.

The Battle of Boston Brings Boy Bands Together

For the first time ever, New Kids on the Block and New Edition shared the stage! The boy band and R&B group brought their A-game to the show to deliver some of their biggest hits. NKOTB kicked off the so-called “battle” with a performance of “The Right Stuff,” which New Edition followed with a flawless delivery of “Candy Girl.”

NKOTB came back with “Step by Step” and “Mr. Telephone Man.” The two groups then joined forces at the end to combine “Is This the End” and “Please Don’t Go Girl,” before New Edition took over again and sang “Can You Stand the Rain.” Seeing the two groups come together was a real thrill.

NKOTB’s Donnie Wahlberg spoke with ET’s Cassie DiLaura on the red carpet ahead of the big show, and said, “It’s surreal. Being here is always fun, but to be here with New Edition, who mean so much to us and really paved the way for us, and all boy bands. It’s kind of a boy band night, and it wouldn’t be right to be here without the real guys who created the modern boy band.”

Zoe Wees Is a Vocal Powerhouse

The German pop star commanded the stage in the night’s penultimate performance as she served up a moving and impressive delivery of “Girls Like Us.” Surrounded by back-up dancers on a minimalist stage, Zoe proved you don’t need more than lyrics and a stunningly unique voice to steal the spotlight.

After a silky smooth opening number from Silk Sonic, BTS delivered a smooth, fun, upbeat performance of “Butter” to close out the star-studded show. As always, the band delivered the moves and charm that have made them next-level megastars, and the performance served as a great cap to their big night, where they took home three awards for Artist of the Year, Favorite Pop Duo or Group, and Favorite Pop Song — which they earned for “Butter.”

PrevPreviousBTS Had the Best Night Ever at the 2021 AMAs — See All the Best Moments!
NextParis Hilton Shares Sweet Snapshots With Carter Reum on Their Honeymoon In Bora BoraNext