2023 Awards Season Guide: Everything About the Golden Globes, GRAMMYS, Oscars and More 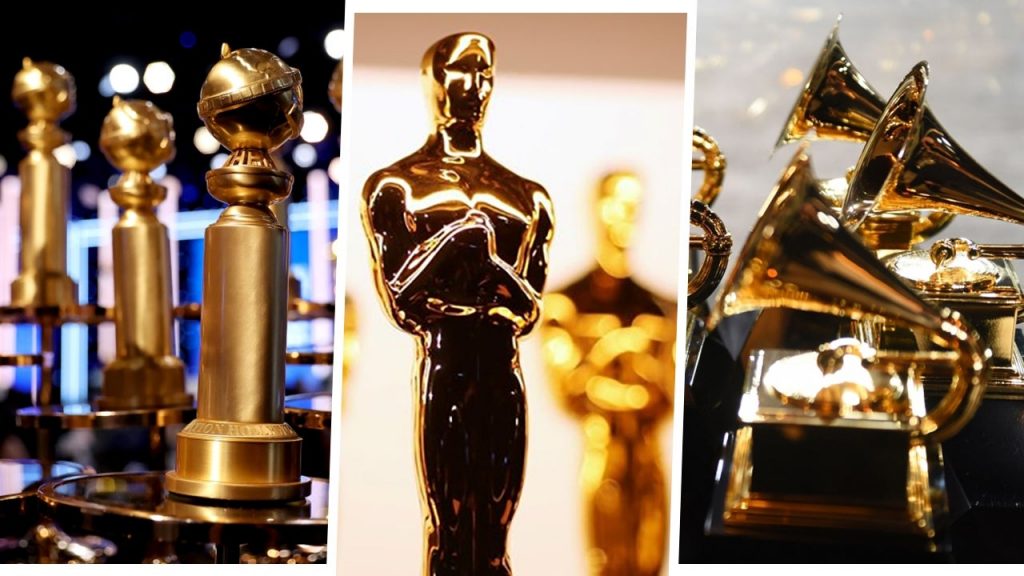 Following several years of delays and changes to the entertainment industry and the last effects of the coronavirus pandemic and other controversies, the 2023 awards season is getting back to normal as the powers that be determine the safest and most responsible way to honor the year’s best in film, television, music and more.

Back this year are the Golden Globes, which will once again kick off the season with a televised ceremony on Jan. 10. That leads to a packed few months, with ceremonies taking place nearly every weekend from mid-January to mid-March, ending with the Oscars on March 12.

Below, ET has your handy calendar that will be continuously updated with all the key dates and details as we learn more about what’s to come from the SAG Awards, GRAMMYs, BAFTA Awards and more.

Where: Beverly Hills, California, and broadcast live on NBC and Peacock

Nominees: On the film side, The Banshees of Inisherin starring Colin Farrell leads with eight nominations and is followed by Everything Everywhere All at Once with six while Babylon, The Fabelmans and Elvis are all tied with five each. The most nominated TV series of the year is Abbott Elementary with five total. The ABC sitcom is followed by The Crown, Dahmer – Monster: The Jeffrey Dahmer Story, Only Murders in the Building, Pam and Tommy and The White Lotus, all of which received four nods each.(See the full list.)

Winners: The Banshees of Inisherin ended up taking home the most wins with three, including Best Motion Picture – Musical or Comedy while Everything Everywhere All at Once and The Fabelmans tied with two wins each. On the TV side, Abbott Elementary won three of five awards with The White Lotus following closely behind with two wins. (See the full list.)

What to Know: After a year off the air following controversy over the Hollywood Foreign Press Association’s membership and nomination process, the Golden Globes returned to NBC. The revitalized 80th annual awards, which has been bumped from its traditional Sunday time slot in favor of football, was hosted by Jerrod Carmichael and honored Eddie Murphy with the Cecil B. DeMille Award and bestowed Ryan Murphy with the Carol Burnett Award.

The three-hour event at the Beverly Hilton, which traditionally kicks off awards season, turned out to be a star-studded affair. While nominated for his performance in The Whale, Brendan Fraser previously said he would sit this one out after coming forth with a sexual assault allegation against a former president of the HFPA in 2018.

Where: Las Vegas, Nevada, and broadcast live on CBS and Paramount+

Nominations: Among this year’s top nominees are Beyonc? with nine, Kendrick Lamar with eight, and Adele and Brandi Carlile with seven, while Mary J. Blige, DJ Khaled, Future, The-Dream, Randy Merrill and Harry Styles all followed closely behind with six each. Of course, this being the GRAMMYs, no one is ever truly satisfied with the list. (See the full list.)

What to Know: Former Daily Show host Trevor Noah is back to emcee the annual music event, which continues to drum up its own controversy year after year. Following the 2021 ceremony’s snubbing of The Weeknd in all major categories, the Recording Academy amended its nomination process by eliminating the use of anonymous review committees. It also changed the number of categories in which Academy members can vote as a way “to evolve with the musical landscape and to ensure that the GRAMMY Awards rules and guidelines are transparent and equitable.”

Ahead of the 65th annual ceremony, the Recording Academy announced five new award categories “as part of the organization’s commitment to evolve with the ever-changing musical landscape.” The new awards include Songwriter Of The Year (Non-Classical), Best Alternative Music Performance, Best Americana Performance, Best Score Soundtrack For Video Games And Other Interactive Media, and Best Spoken Word Poetry Album, all of which will be handed out for the first time in February.

Where: Royal Albert Hall, London, and broadcast on TBA

Nominees: To be announced

What to Know: The British Academy is looking to freshen things up when it comes to the 76th BAFTA Awards. The upcoming ceremony will see several changes, including two hosts, with one presenting from the auditorium where the awards are handed out, and another in the new BAFTA Backstage Studios, where presenters and winners will be interviewed.

Additionally, the event will see a mix of “music newcomers and legends” performing throughout the the night. Another significant change will involve presenting the final four categories live for the first time in the show’s history.

Of course, there’s still the chance of seeing members of the royal family, with the Prince and Princess of Wales expected to attend and/or present like they’ve done in years past.

Nominees: The day after the HFPA handed out the Golden Globes, the Screen Actors Guild revealed its own nominees, with The Banshees of Inisherin and Everything Everywhere All at Once leading the pack with five nominations each. The two frontrunners were followed by Black Panther: Wakanda Forever, The Fabelmans, The Whale and The Woman King, with each garning two nominations. On the TV side, Ozark closed out its final season with four nominations while Barry, Better Call Saul and Only Murders in the Building followed closely behind with three each. (See the full list.)

What to Know: The SAG Awards is the only ceremony that exclusively honors the actors. Voted on by the members of SAG-AFTRA, awards are handed out in 13 categories, recognizing the best performances in scripted programming released during the past year.

Last year, the 28th annual event made history when deaf/non-hearing cast members of CODA and cast members of the non-English language series, Squid Game, were awarded some of the biggest prizes of the film and TV categories, respectively.

This year, after TNT and TBS declined to continue broadcasting the event, SAG made a deal with Netflix to stream the ceremony. Starting in 2024, the SAG Awards will be hosted on the streaming platform while this year’s ceremony will be available to watch via Netflix’s YouTube channel.

Where: Santa Monica, California, and broadcast live on TBA

Nominees: This year’s most-nominated films are Everything Everywhere All At Once, which garnered eight total nods and will compete in the Best Feature category against T?r, which followed closely behind with seven nods. On the TV side, Abbott Elementary, The Bear, Severance and Station Eleven all tied with three nominations, with the latter three all competing in the Best New Scripted Series category. Both Pachinko and Women Talking were recognized with ensemble awards. (See the full list.)

What to Know: Traditionally handed out the Saturday before the Academy Awards, the ceremony has been moved up the calendar starting in 2022 with the intention of “placing the Spirit Awards squarely in the corridor leading into Oscar voting.” This year’s ceremony will take place during the middle of the final voting for the Oscars.

The ceremony has also opened up the awards to include both film and TV categories for a second year in a row while the upcoming 2023 ceremony will hand out gender-neutral acting prizes for the first time in its 38-year history.

Where: Hollywood, California, and broadcast live on ABC

Nominees: To be announced

What to Know: After two years of delayed ceremonies due to COVID-19 and the Winter Olympics, the Academy Awards are wrapping up awards season much earlier this year, with things hopefully ending on a high note.

Last year, Regina Hall, Amy Schumer and Wanda Sykes teamed up to host the 94th Oscars, which was largely notable for an incident involving nominee-turned-winner Will Smith slapping presenter Chris Rock across the face after the comedian made an unwarranted joke about Jada Pinkett Smith.

While the fallout was swift and Smith resigned from the Academy, he is still eligible to be nominated again this year for his lead role as a slave named Peter in Emancipation. But until the full list of nominees are revealed, it’s unclear how things will pan out for the actor while everyone still awaits to hear how the upcoming ceremony hosted by Jimmy Kimmel will acknowledge what happened on stage the year prior.