Adele is having a moment and we are thankful for that 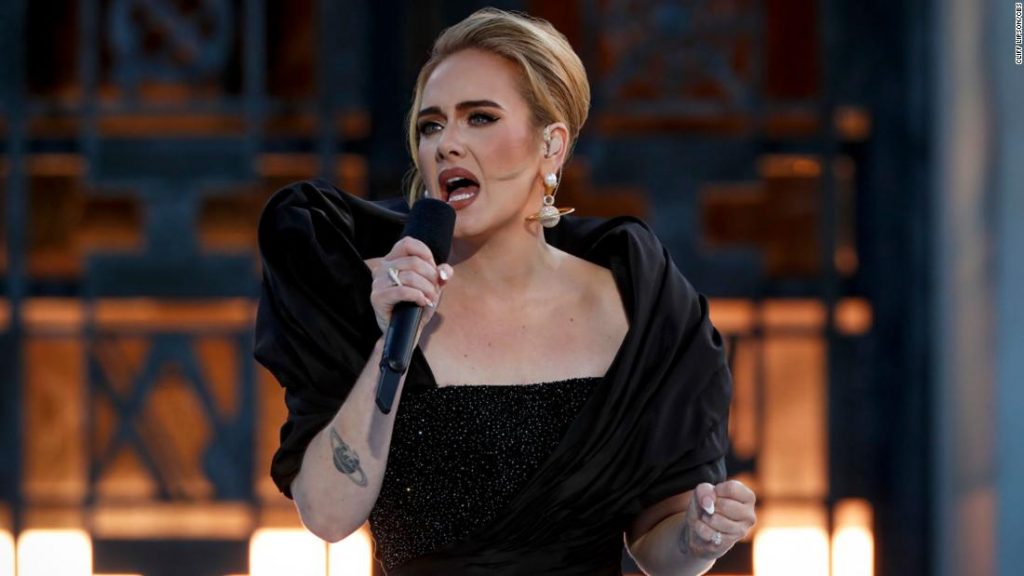 The British singer is back with a new album, a new love and a new attitude.
It all looks good on her, so this week’s Pop Life Chronicles is all about Adele to make her feel our love.

‘Adele One Night Only’
Read More
The sumptuous location, Adele in that couture gown and, oh, the music.
Adele’s CBS special owes us nothing, as she slayed with the tunes, the banter and the interview in Oprah Winfrey’s gorgeous garden.
And did we mention the absolutely precious marriage proposal that happened during the show at LA’s Griffith Observatory?
You can watch (or rewatch) it all happen on Paramount+, where it’s currently streaming.
‘Skyfall’
No, Adele didn’t act in this one, but she sang the theme song for the 23rd installment of the James Bond franchise.
So come for the car chases, high-tech gadgets and Daniel Craig’s suave demeanor, but stay for the music that earned Adele an Academy Award for best original song in 2013.
Adele’s Album of the Year win at the 59th Grammys
It’s not a streaming movie or TV show, but I had to include one of the greatest Grammy speech moments ever.
Adele took to the Grammys stage in 2017 to accept the award for album of the year for “25,” talked about her life, praised her son and husband at the time, then tearfully said she couldn’t possibly accept because the album of her life was Beyonce’s “Lemonade,” which had also been nominated.
“It was so monumental, Beyonce,” Adele said to her fellow nominee, who was seated in the front row.
The camera went to a pregnant, tearful Bey in the audience, mouthing her love for Adele. They were crying and we were, too, at how wonderful it was to see two queens supporting each other.
It’s on the Recording Academy’s Grammys YouTube channel.

Two things to listen to

This one is so easy because her new album, “30,” has dropped.
Adele’s fourth studio album felt a long time coming since her last one was released in 2015.
Her debut single from the new collection, “Easy on Me,” blew up on the charts and streaming services — and the album has been expected to be a massive seller from the moment it had been announced.
I feel like any album with a single titled “I Drink Wine” can’t help but win.
It’s out now.
For a bit of nostalgia, go back and listen to her “21” album from 2011.
With hits like “Rolling in the Deep” and “Set Fire to the Rain,” Adele defied the sophomore jinx, which often finds successful artists unable to do well with their second album.
Not only did she gain critical acclaim, she could barely hold all the Grammys she won the following year.

One thing to talk about

Adele seems different these days, and we are not talking about her weight loss.
Instead, she seems more confident and willing to let fans in on her life and thoughts.
Opening up in an interview with Vogue and her sit-down with Oprah Winfrey, she seems relaxed and happier in her skin.
She talked to Winfrey about how being in this new place in her life helped her find love with superstar sports agent Rich Paul.
“It’s just timing,” she said. “But it’d be interesting to see what my reaction is like in general to anything that hurts me now that I feel so secure in myself, and I’m talking outside of romance as well.”
Speaking of Adele and Paul, they are one of the Hollywood couples discussed in the latest episode of my weekly show, Pop Life Pop Off! Check it out here:

Something to sip on

For years, Adele would disappear from the scene and only come back when she had new music to drop.
It was a risky strategy in a time when fans have come to expect celebrity visibility on social media and everywhere else.
But the thing is, I don’t think Adele gave a flying, ahem, thought about strategy.
She appeared to simply just be living her life, which enabled her to write the songs that we have come to love.
Now she has done her first Instagram Live (where she couldn’t have been more charming) and allowed her followers to share in the excitement of the new album.
And even if she chooses to drop off the scene again — remember this is a woman who said her last tour might be her final tour — she owes us absolutely nothing because artistically she has already given us so much.

PrevPreviousDionne Warwick Doubles Down on Offer to Pay Postage for Taylor Swift’s ‘All Too Well’ Scarf (Exclusive)
NextArt LaFleur, ‘Sandlot’ Actor, Dead at 78Next