Alfonso Ribeiro on Getting Tom Bergeron’s Blessing to Host ‘DWTS’: ‘I Follow in His Footsteps’ (Exclusive) 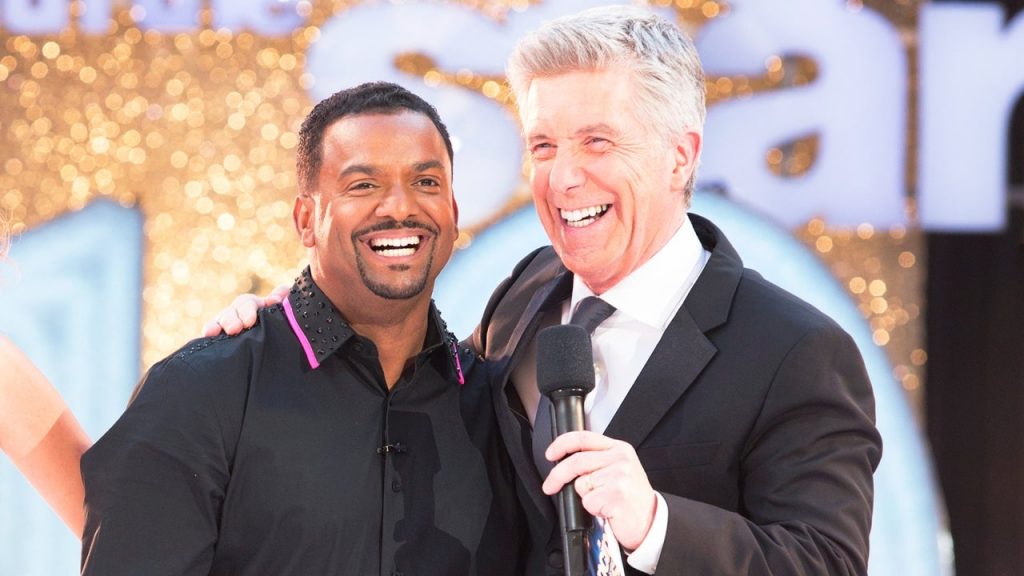 Alfonso Ribeiro has stepped into Tom Bergeron‘s dancing shoes not once, not twice, but three times. But if the new Dancing With the Stars co-host had his druthers, he’d like to step into Bergeron’s shoes again and again and again.

Ahead of the season 31 premiere Monday, Sept. 19 on Disney+, Ribeiro spoke with ET’s Matt Cohen and opened up about co-hosting DWTS and how he’s no stranger to following in Bergeron’s footsteps. For starters, Ribeiro took over Bergeron’s hosting duties on America’s Funniest Home Videos in October 2015 following Bergeron’s 15-season run.

It’s also not the first time Ribeiro will co-host DWTS. Also in October 2015, Ribeiro filled in for one episode, after Bergeron missed a show to be at his sick father’s bedside. After getting the call earlier this summer that they’d like him to be a permanent co-host, Ribeiro said he hopped on the phone and chatted with Bergeron about it while also joking about Ribeiro, once again, following in his footsteps.

Bergeron shared his excitement after Ribeiro was announced as the new co-host. But perhaps nobody’s more excited about it than Ribeiro’s longtime pal, DWTS co-host Tyra Banks, who explained why the move from ABC to Disney+ required a second host.

“So, with the addition of Disney+ there’s a whole new way of doing the show and it’s impossible to host the show alone,” Banks says. “It’s impossible based on no commercials, needing to clear the sets and so we knew that we needed to have a co-host. They said one name to me. One. The first. You [Ribeiro] were not down the list. The first, and I was like, ‘Stop right there.’ I was like, ‘People are going to be obsessed with this.'”

It’s true. Ribeiro and Banks go all the way back to their days on Fresh Prince of Bel-Air,her first acting gig.

Those aren’t her only memories.

“I remember two things very vividly,” Banks says. “One is, you would hear Will Smith before you saw him. So, he was a wonderful leader. He would come in like, ‘What’s up everybody?’ It was just like this announcement of his voice that he saw energy. And, you know, I was young and insecure. First acting job. I didn’t know what the hell I was doing and it was a family. And not just the Banks of the characters, but they were a true family of love. So, hearing his voice was great. And then there was Alfonso. Alfonso was this great, this weird warmth that I felt with you, but I also felt like a brother that I would tease.”

But their connection goes further than the NBC sitcom. Ribeiro was in the seventh grade and Banks in the fourth grade when they attended the same middle school in Los Angeles. She recalls Ribeiro appearing in Michael Jackson commercials and other work on TV that made him a popular kid in school.

“He had these fans around him at lunch time all the time,” Banks recalled. “I actually took your picture — you didn’t even know it — and I still have it. It was crazy. And then the next year, Gary Coleman came to our school. It was, like, the celebrity school. I wasn’t a celebrity, but I was chasing y’all.”

That Ribeiro’s been a past DWTS champion (he won season 19 with Whitney Carson as his partner) is something Banks thinks will only make him a more well-rounded host.

“He knows this show from the technical to the emotional, like, he really knows it,” Banks says, “and so spending time with these dancers and the stars he’s like, ‘I’ve been in your space.'”

Season 31 of Dancing With the Stars premieres Monday, Sept. 19 on Disney+.

Why Gabby Windey Was Chosen for ‘DWTS’ Over Rachel Recchia

Selma Blair on Competing on ‘DWTS’ With MS (Exclusive)