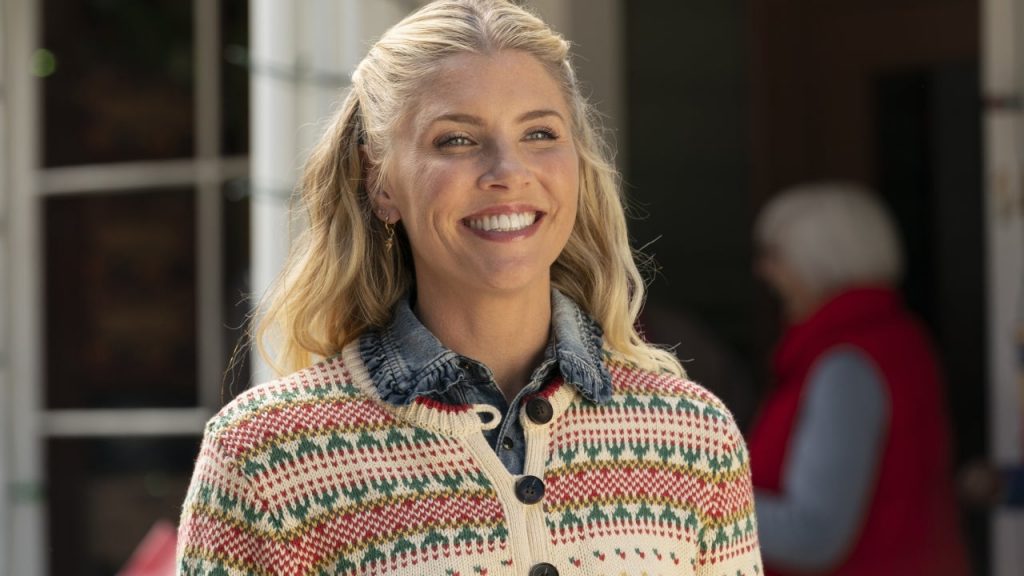 Amanda Kloots was looking for a release in July 2020 following the death of her late husband, Nick Cordero, when she turned on the TV at 3 a.m. after being unable to sleep. What she found were Christmas movies playing in the dead of summer.

“I was like, ‘You know what? This is exactly what I need right now. I need to just lose myself in the Christmas season in the midst of the hottest month of summer,” Kloots exclusively told ET in August on the Vancouver set of CBS’ Fit for Christmas, which she stars in, co-wrote and executive produces. Kloots also gave ET an exclusive set tour and put on her interviewer’s hat as she grilled co-star Paul Greene.

“My little boy, Elvis, woke up and we were laying there together watching this Christmas movie, and laughing and cuddling and having an amazing 3 a.m. moment. And the idea came to me,” she continued. “I was inspired to create a Christmas movie about a fitness instructor and I can’t believe we’re here right now. It’s seriously a dream come true.”

In Fit for Christmas, which is the first of three original CBS holiday movies to air this yuletide season, Kloots plays Audrey, an enthusiastic Christmas-obsessed fitness instructor teaching classes at her beloved, financially beleaguered community center in Mistletoe, Montana. She begins a holiday romance with a charming, mysterious businessman (Greene), complicating his plans to turn the center into a more financially profitable resort property.

“I would best describe this as a story [of] a woman who has lost a lot of things in her life and is trying to find her place again,” The Talk co-host said of the film’s message, sharing that Audrey “is very inspired by me and my daily life.” “And in the midst, of course, falls in love with a very handsome man. And there is always the passion in finding the true meaning of Christmas as well.”

Kloots also praised her love interest in the film, played by Hallmark staple Greene, calling him “a blessing.”

“I absolutely love him,” she doubled down. “From the first time we met, I felt like I had known him for years. And yes, I have watched him in so many Christmas movies over seasons and seasons. And so, it was so fun to finally get to meet him and I’m having a blast acting with him every day. And seriously, it is a Christmas miracle that we get him on this movie.”

This past July, Kloots honored her husband with a touching tribute on the two-year anniversary of his death. The 40-year-old TV personality shared one of her favorite Christmas memories with Cordero that will stick with her for the rest of her life.

“My favorite Christmas memory with Nick, probably, was our first Christmas that we spent with Elvis,” she shared. “We were so lucky to be with a lot of my family down in this beautiful vacation spot in North Carolina, where it’s over Christmas-ified. We felt like we were in a Christmas movie and I’ll never forget it. It was so special to be with my family and with my son for the first time and Nick. And it was a wonderful, beautiful Christmas. Goes down as one of my favorites.”

And though she’s taking things day by day, Kloots acknowledged she is beginning to potentially start at least one new holiday tradition with Elvis, now 3.

“It’s been a challenge of mine to find the Christmas spirit ever since I lost Nick. I’ll openly admit that. It’s just been really tough. You feel like your family is missing. But we did start something last year, because he sort of started to understand the holiday a little bit,” Kloots said of her son.

“We were at my home in Ohio and we didn’t have any cookies for Santa. So I improvised and I said, ‘Elvis, we’re going to leave Santa M&Ms.’ And so, that’s what we left for Santa Claus at the fireplace. And I thought, you know what? Maybe that’s just what one of our new traditions is, is that we leave Santa Claus M&Ms. Maybe that’ll stick throughout the years.”