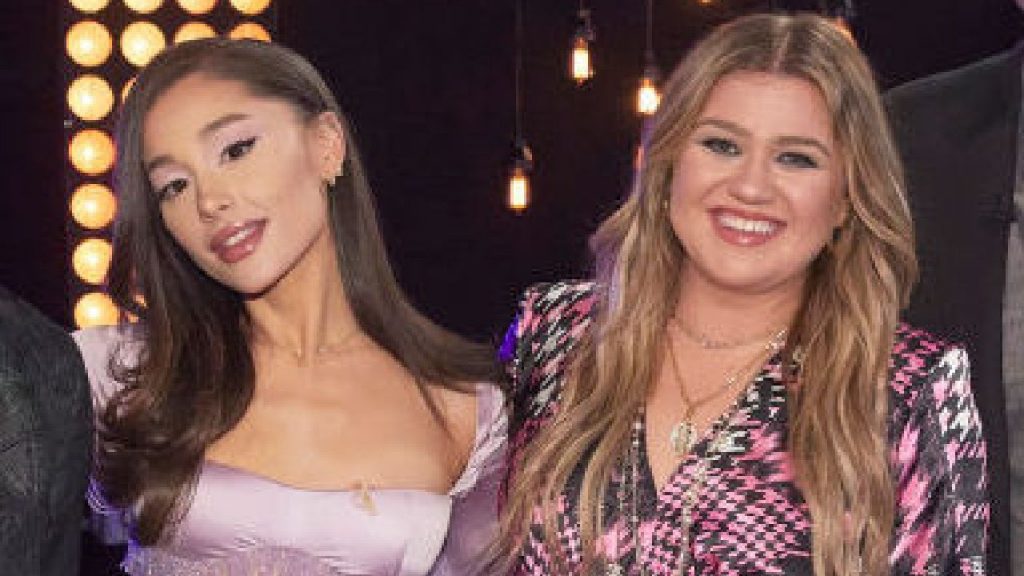 Ariana Grande and Kelly Clarkson are going to head-to-head and we’re not just talking about on The Voice. The pair and their fellow Voice coaches, John Legend and Blake Shelton, are facing off in the premiere episode of Jimmy Fallon‘s new variety game show, That’s My Jam.

In teaser from the episode, Fallon tasks Grande and Clarkson with singing a medley of classic hits during the show’s “Mixtape Medley Showdown” segment. A random spin of the show’s big wheel assigns the pair the “pop divas” genre.

Grande had to sing songs including Britney Spears’ “Oops!…I Did It Again,” Cher’s “Believe,” Whitney Houston’s “How Will I Know” and Celine Dion’s “It’s All Coming Back to Me Now,” while Clarkson was asssigned Shania Twain’s “Any Man of Mine,” Alanis Morissette’s “You Oughta Know” and Toni Braxton’s “Un-Break My Heart.”

While the clip shows the popstars singing their hearts out to win the game, viewers won’t get to find out the winner of the showdown, until the entire episode of the new NBC series airs, Nov. 29.

Each episode of That’s My Jam will feature two teams of celebrities who are competing for a charity of their choice in a slew of music, dance and trivia-based games, many of which were seen on or inspired by those played on The Tonight Show.

In addition to “Mixtape Medley Showdown,” the hourlong variety show will feature several other games including, “Launch the Mic,” “Air Guitar,” “Don’t Drop the Beat,” “Perfect Mash-Up,” “Wheel of Impossible Karaoke,” “Slay It, Don’t Spray It” and more.

The sneak preview episode of That’s My Jam airs on NBC Nov. 29, immediately following The Voice.

PrevPreviousA TV Fan’s Guide for Books to Read This Winter: ‘Outlander,’ ‘Bridgerton’ & More
Next‘The Bachelorette’: How Michelle Made History With Her Final 4 MenNext