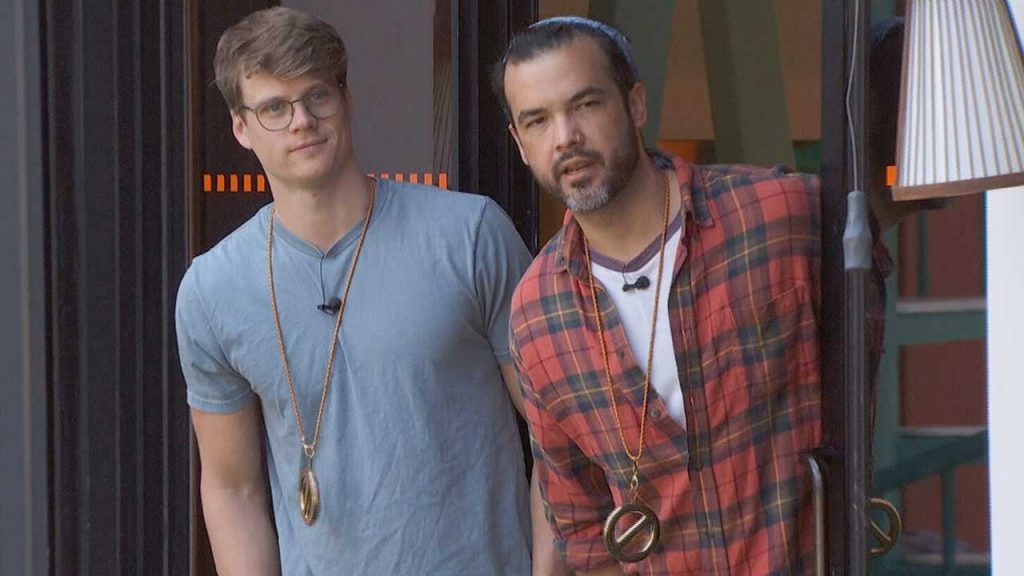 Sometimes, art can transcend simple entertainment and become something greater — a tale for the ages, like the Greek legends written by Homer or the timeless quality of irony-filled Shakespearian tragedies. That’s basically where we’re at this week with Big Brother.

Thursday’s live eviction episode was filled with tears, frustration and some accidental betrayal that left some houseguests in shock, and others overjoyed.

So, who wound up getting sent packing? Scroll down for the big reveal. Otherwise, here’s how everything that leaded up to and played out during Thursday’s live show.

In a nutshell, The Leftovers alliance is running the house and are making some amazing plays, even when they don’t mean to be. The alliance is made up of Matthew “Turner” Turner, Kyle Capener, Joseph Abdin, Monte Taylor, Brittany Hoopes, Michael Bruner and Taylor Hale.

For reasons that so many fans can’t wrap their heads around, houseguests Nicole Layog and Daniel Durston — who are each other’s ride-or-dies — have been obsessed with kicking Taylor out of the house since day one, really for no reason that anyone can descern.

Taylor has been on the block time and again, but with The Leftovers alliance blindsiding everyone last week by getting Ameerah Jones booted, she’s now a central part of the season’s most powerful bloc. And at the start of the week, she made it very clear she didn’t want to be back on the block any time soon.

On top of the usual madness and complications that stem from alliances, this season also features a Festie Bestie twist, where the houseguests are all paired up. However, they didn’t exactly choose who they would be paired with, so not all of the Festie Besties are actually allies. For example, Taylor is a Festie Bestie with Nicole, who has been hell bent on getting her kicked out.

The only problem is, when it comes to eviction nominations, Festie Besties have to both go up on the block. So to get Taylor out Nicole would have to also risk getting the boot. And that would be totally wreckless to even think about, right? (Here’s that dramatic irony and classic forshadowing we were talking about before.)

Monte decided to nominate Alyssa Snider and her Festie Bestie Indy Santos, both of whom aren’t part of The Leftovers. This was a decidedly smart nomination for a number of reasons. First off, Alyssa is a strong player and her burgeoning showmance with Kyle could risk the safety of the alliance.

Secondly, if Alyssa was voted off, Indy would get paired with another one of the Festie Bestie duos. If they could convince her to joined up with Brittany and Michael then it would mean every single member of The Leftovers would then be in a Festie Bestie pairing with someone outside the alliance — therefore any time anyone got nominated, they could just vote against the person not in the alliance and effectively control the house for the rest of the season.

It’s a brilliant strategy that many credit to Season 23’s Tiffany Mitchell when it came to making that season’s historic Cookout Alliance such a success.

However, when it came time to the Veto Competition, things got complicated. Daniel — who is very sure he knows exactly what is happening in the house, despite objectively not knowing almost anything that is going on – is paired with Kyle, and together they won the Veto Comp.

Despite his loyalty to The Leftovers, Kyle really didn’t want Alyssa nominated because he has a crush on her. However, he didn’t want to actively make a move against his own alliance.

Daniel, meanwhile, was convinced that Monte wanted him to use his Veto, so he decided not to just to try and throw a curveball, totally unaware that this is what Monte actually wanted. However, when Monte told Daniel that he hoped he wouldn’t use the Veto, Daniel suddenly became convinced that Monte is lying.

“I wanted to use the power veto after all because Monte was really pressing that we keep the nominations the same. I have not trusted Monte ever since the Ameerah vote,” Daniel explained in the diary room. “This is my opportunity to take a shot at the new alliance that seems to be forming.”

So, Daniel decides to use the Veto. This means Kyle got to look like he saved Alyssa while at the same time he didn’t have to betray his alliance. It also paved the way for Monte to nominated another duo — Taylor and Nicole.

Essentially, through a combination of manipulation, arrogance and paranoia, the Leftovers tricked Daniel into essentially putting his only ally on the chopping block.

However, due to the aforementioned arrogance, Daniel and Nicole were still very confident that the house would vote out Taylor instead of her. In a quiet moment together, Nicole and Daniel even mocked the other houseguests for being “clowns” and laughed at them for nominating Taylor.

The old adage that pride cometh before the fall has never been more perfectly demonstrated on a reality TV show in recent memory.

And that brings us to Thursday’s live eviction night!

With Nicole and Taylor on the chopping block, they each were given a chance to appeal to their fellow houseguests to keep them in the house.

Nicole went first, sharing, “I told myself that I would come into this game with loyalty and integrity on the table. This week has humbled me. I promise that if you decide to keep me in this game I will continue to play with humility and grace. This week has put a fire underneath me and I promise you I will fight for my life in this house and I will fight for the life of you guys to make sure that the right person wins this game. I love you all.”

Taylor, after weeks of putting up with gaslighting and microaggressions from Nicole and Daniel, used her appeal to essentially speak her mind and deliver a surprisingly aggressive speech.

“Nicole, to quote a Big Brother super fan Rihanna, you look so done right now. Choosing me as your Festie Bestie you thought was your security blanket but here we are, both of us, sitting on the chopping block,” Taylor said. “To the houseguests, if you keep me in this game you have always understood where I stand. I’ve never covered any tracks, I’ve never tried to mislead any of you. If you have Nicole, you’ll have somebody who will wrap you around her finger to get what you need. That’s not the game I choose to play. Moving forward, you always will know where I stand. I love all of you, including Nicole.”

Between Taylor’s appeal and some low-key gameplay from Monte, it seems that Alyssa, Jasmine Davis, and Indy were convinced that they didn’t want to be on the wrong side of the house majority, and all ended up voting to boot Nicole, along with the Leftovers.

By a vote of 9 to 1, Nicole was sent packing. The lone vote for Taylor obviously coming from Daniel, who now realizes that he’s more alone in the house than he even realized.

Nicole took the ejection well, however, and graciously shared hugs and farewells before departing the house and sitting down with host Julie Chen Moonves for her exit interview.

When asked about Taylor’s final speech, Nicole said, “I thought it was amazing and comical. She spoke nothing but the truth. I thought that I would be able to manipulate her and control her game, which in turn would give me safety.”

“I thought we had the numbers to be able to get enough people on our side,” Nicole said when asked about her confidence going into the live vote, ” and to keep me safe and to finally get Taylor out of the house because she had been the main target for the last however many weeks.”

When Julie revealed the identity of The Leftovers, Nicole said she was “not at all” surprised by who was part of the group, and didn’t seem too surprised by the fact that they formed in response to Daniel’s treatment of Taylor two weeks ago.

After Nicole’s departure, Taylor was given the choice of which set of Festie Besties she’d like to team up with, and Taylor chose Indy and Alyssa! Meaning The Leftovers’ plan of having everyone in the alliance paired with people out of the alliance has still come to fruition.

Although only time will tell if Daniel’s isolation in the house will destroy his motivation or drive him over the edge.

‘Big Brother,’ ‘Survivor’ Alums Battle It Out in ‘The Challenge: USA’