BTS Had the Best Night Ever at the 2021 AMAs — See All the Best Moments! 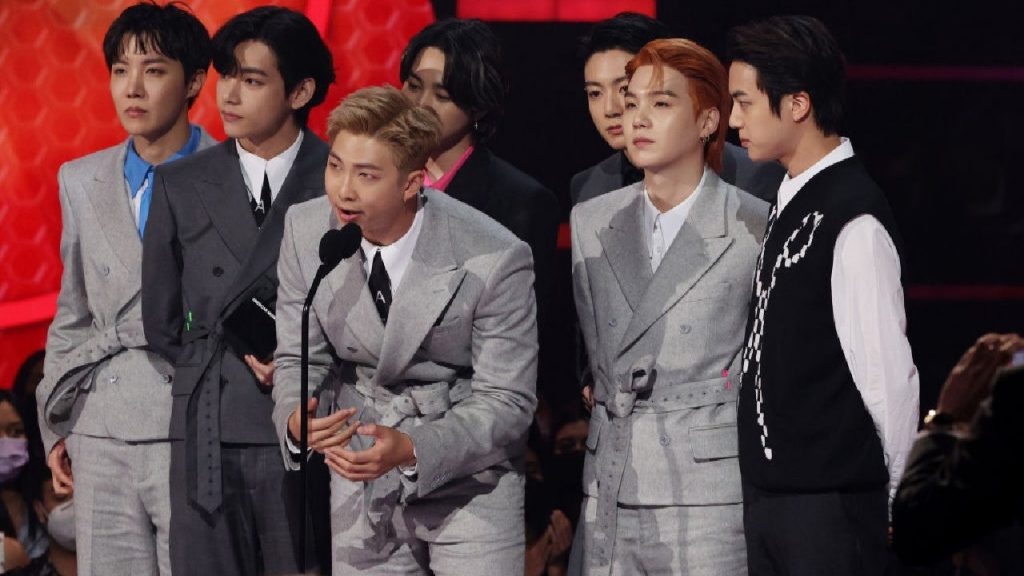 No one had a better night at the 2021 American Music Awards than BTS! The K-pop group not only took home every award they were nominated for on Sunday night, including Artist of the Year, Favorite Pop Duo or Group and Favorite Pop Song, they also took the AMAs stage, performing “My Universe” with Coldplay before later closing out the show with “Butter.” (Megan Thee Stallion was supposed to join BTS for the remix but had to drop out last minute.)

That didn’t stop BTS from being in good spirits as their fans cheered them on throughout the night. ET spoke with the group on the red carpet, where RM shared just how long they have been waiting to perform live, “We’ve been waiting for this for so, so long time.”

Check out all the ways BTS won the night at the 2021 American Music Awards below:

BTS Spend the Weekend With Lizzo and Harry Styles

BTS have been living it up since arriving in Los Angeles, spending their weekend hanging with Lizzo at the Harry Styles concert.

“It was fun, very fun,” J-Hope shared of the group’s night out, before Jungkook added that his shirt was soaked in sweat from dancing so much.

When asked if they got a chance to chat with Lizzo about collaborating on a song together, Jimin noted that it was so loud they couldn’t really chat.

“We shared phone numbers,” J-Hope added, with RM agreeing that they are “so open” to working on a song together. “She’s so fire.”

The group’s first performance of the night was their high-energy Coldplay collab, which featured impressive pyrotechnics and, of course, the ARMY fan chants!

BTS Win Artist of the Year, Favorite Duo or Group and Favorite Pop Song For “Butter”

In their acceptance speech for their Artist of the Year win, RM thanked the ARMY and all their fans all over the world for their continued support.

“Four years ago we gave our first-ever live performance on the AMAS. We were too excited and nervous at the time. It’s been a long ride since then, but nobody could have ever bet on the odds of us standing here receiving this award, except y’all, ARMY,” RM said. “Seven boys from Korea, united by love for music, met the love and support from all the Armies all over the world. This whole thing is a miracle, seriously. We never take this for granted. Thank you so much, we love y’all.”

Host Cardi B joked about how in-demand Siwa is, but BTS is who the YouTube star and performer wanted a selfie with!

Before their show-stopping performance with New Edition, NKOTB paused for a pic with the hottest boy band of today!

Before her stunning performance of “Have Mercy,” Chloe also had to get a selfie!

“BTS is here, the homies,” Becky G told ET on the red carpet, when asked who she was most excited to see at Sunday’s show. “I love them. We literally got here at the same time. We were catching up ’cause I haven’t seen them in so long.”

Cardi B Says Daughter Kulture Is a Huge BTS Fan

This year’s host, Cardi B, gushed over the group, telling ET ahead of Sunday’s show that BTS is a group her 3-year-old daughter, Kulture, loves.

“That girl listens to BTS because, you know, they’re, like, more, like, friendly and they make her dance and all that stuff,” Cardi said. “So I know she gonna be excited to see them.”

And the appreciation goes both ways! On the red carpet, BTS sent a special shout out to Kulture, telling their young fan, “You know what’s up!”

The singers brought their music video to life with the perfectly choreographed dance moves. The crowd went wild as they sang the mega-song and closed out the awards show.