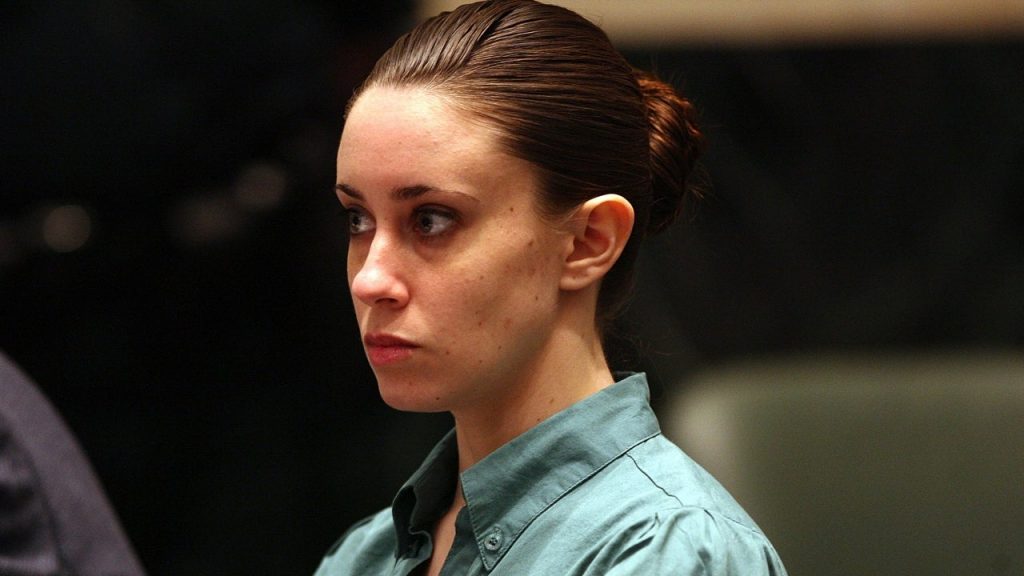 Eleven years after Casey Anthony was acquitted of murdering her 2-year-old daughter, Caylee, she is speaking out on camera for the first time in the docuseries Casey Anthony: Where the Truth Lies, which is now streaming on Peacock.

During the three-part documentary directed by Alexandra Dean, Casey looks back on what happened at the time of the investigation and subsequent trial. She also makes several allegations, claiming her father, George, not only abused her as a child but is also responsible for Caylee’s death.

“I lost everything the day I lost her,” Casey says now.

In the summer of 2008, Caylee was reported missing. In the six months that followed, her remains were discovered in a wooded area near her family’s Florida home while Casey was arrested and charged with first-degree murder.

During her trial, the prosecution argued that Casey was responsible for the death of her child and sought the death penalty. Casey, meanwhile, maintained her innocence while her defense team claimed that Caylee had accidentally drowned before her grandfather allegedly disposed of her body.

After six weeks in court, Casey was acquitted on charges of murder, manslaughter and child abuse. But the jury did find her guilty of providing false information to the authorities, leading to a four-year sentence in jail. She was eventually released in July 2011 for time served and good behavior.

In the docuseries, Casey accuses her father, George, and her brother, Lee, of extensive sexual abuse. “When I was eight years old, my father would start to come into my room at night,” she claims, alleging that her brother “started coming in shortly after I turned 12.” She claims it didn’t stop until she was 15.

“I regret every day I didn’t come forward with what he did to me,” Casey says regarding George’s alleged abuse.

As far as becoming pregnant with Caylee, Casey claims she was raped at 18, but insists that the father of her child was neither George nor Lee. However, she says she never reported the alleged assault to the police because she thought they wouldn’t believe her.

Subsequently, Casey says she made up stories about who the father was at the time, claiming she even convinced one of her friends that he was Caylee’s biological father. “I lied to everyone,” she says.

Casey also shares her version of what allegedly happened on the last day she saw Caylee alive.

Casey claims she was not feeling well at the time and fell asleep with Caylee by her side, before George allegedly shook her awake and asked her where Caylee was. Casey claims she started to look around the house for her daughter until, Casey alleges, George came in holding Caylee’s body.

“He was standing there with her. She was soaking wet,” Casey claims, alleging that George “handed her to me and [told] me it was my fault. That I did that, that I caused that.”

“But he didn’t rush to call 911 or he wasn’t trying to resuscitate her. And I just collapsed with her in my arms,” she claims, alleging that she became hysterical and did not know what to do.

“He takes her from me and he immediately softens his tone and says, ‘It’s going to be OK,’ that she was going to be OK,” she claims. “I wanted to believe him because I wanted her to be OK.”

Explanation for Her Behavior

In July 2008, Caylee was first reported missing by her grandmother, Cindy, who told police she had not seen Casey’s daughter in over a month prior to calling the authorities.

In the docuseries, Casey claims that her questionable behavior during the time her daughter was missing was a coping mechanism to “protect myself from the outside world.” She claims that she “used and manipulated all the people around me in an attempt to appear normal, which is extremely abnormal.”

As for the reason behind her getting the “Bella Vita” tattoo, Casey says, “That was my ‘f**k you’ to my family… That was a subconscious way for me to speak out about all of it.”

“I’m thoroughly embarrassed by everything that happened… [and] so many of the days that followed,” Casey says now. “I wasn’t the same person sitting here.”

When it comes to lying to the cops during the investigation into Caylee’s whereabouts, Casey claims that she was doing what she was told to do by her father. “I have to live with that, knowing that I failed to protect my child,” she says, asserting that she ended up “protect[ing] the person who hurt me.”

“I was convinced that she was OK until December of 2008,” Casey claims, referring to the moment when the authorities found Caylee’s body. Shortly thereafter, she was arrested on murder charges.

“I would rather have been found guilty and spent my life on death row fighting for my life and my innocence instead of pleading to something I didn’t do,” Casey says of turning down an offer to plead guilty during the trial. “It was never a consideration. Ever.”

Later, when Casey’s lawyer shares her allegations of abuse in court, Casey recalls feeling “absolute shame.” She believes now that she’s “tarnished” and “not good enough” for anyone or anything.

When it comes to the accidental drowning defense, Casey claims it was something that came from her mother and her lawyer latched onto it. “He had to explain something. Can’t just tell the jury she doesn’t know,” she says.

Accusations of a Cover Up

Casey says she believes George was involved in her daughter’s death.

She claims he made internet searches for “foolproof suffocation,” and that the smell of a dead body in her car was not the result of anything she did during those 31 days after Caylee went missing.

“My father would know protocols and procedures and how to work a scene,” she claims, asserting that she’s “the only one that knows about the truth of who and what he is.”

Casey also says that she never felt safe leaving her daughter alone with her father. “After Caylee was born, my father was around initially. She was never alone with my dad, not even when she was an infant because I know what I went through,” she alleges.

As for what Casey thinks happened, she claims George “put [Caylee] in the pool to cover up for what he did,” alleging that “there was no ladder… no way for her to shimmy up. There’s no way to explain that.”

Casey then goes on to accuse her father of “putting a pillow over my face and smothering me to knock me out.” She claims that happened to her several times.

“I’m sure there were times where I was incapacitated as a child where my body was limp and lifeless,” she claims, believing something similar could have happened to her daughter.

Casey also claims that George moved on to abusing Caylee and was using the drowning as a way to cover up for what happened. “That’s what I think about,” she says. “I wish every day I had said something to someone about something. Maybe then things would be different.”

PrevPreviousWill Smith Tearfully Recalls ‘Horrific Night’ at 2022 Oscars in First Late-Night Interview Since Incident
NextHailey Bieber Shares Photo of Her Stomach With Cyst the Size of an Apple on Her Ovary: ‘Not a Baby’Next