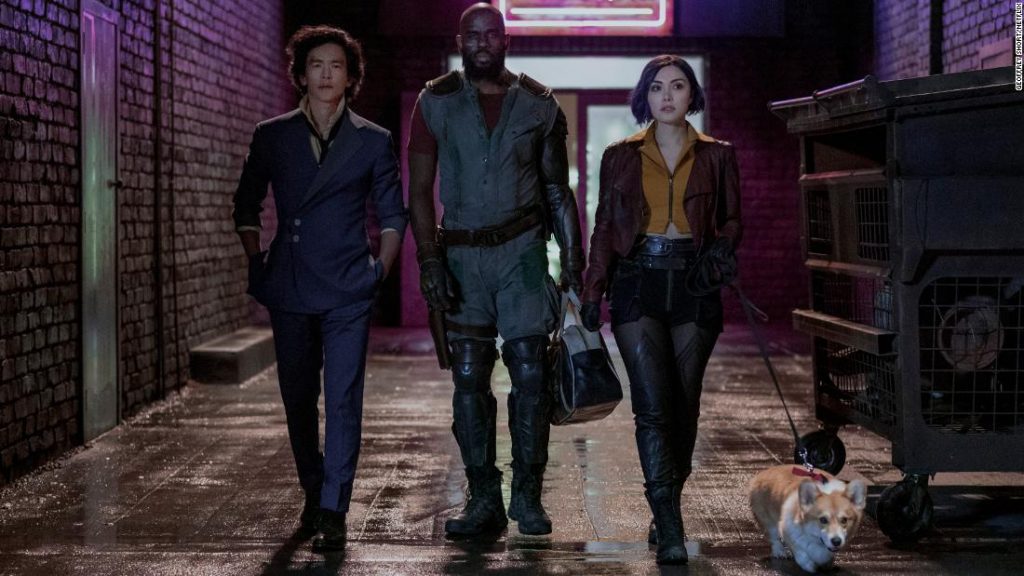 Share on facebook
Share on linkedin
Share on twitter
Share on email
Both shows fall flat, for different reasons.
“Cowboy Bebop” seeks to replicate the style and tone of the violent animated series, a space western that features a trio of bounty hunters (or “cowboys”). They’re played by John Cho (under a tousled mop of hair), Mustafa Shakir and Daniella Pineda, hunting a bizarre array of targets, firing off playful banter and weapons in near-equal measure.
While much of the action is episodic, the season is connected by a larger plot involving the villainous Vicious (Alex Hassell), from the Cho character’s past, and the alluring woman (Elina Satine) that came between them — a thread that feels so familiar as to become a bit of a snooze.
Introduced in Japan in 1998 and in the US via Adult Swim three years later, the series demonstrates once again that it’s not easy to approximate the tone of a cartoon in a live-action format, even one that’s adult in its content. (Netflix is also streaming the original show to maximize the bangs — and there are a lot of them — for its bucks.)
Read More
All told, the new series is big, loud and lavishly produced, with a music-infused sensibility that works in its favor, or at least should.
Yet somehow, the producers have managed to make a show that appears to have provoked skepticism among the original’s devotees — who speak of it with the kind of reverence once reserved for “Citizen Kane” — without effectively inviting newcomers into the party.
Whatever the cause, the chemistry feels off. And while the action sequences are stylishly choreographed, “Cowboy Bebop” finally bangs out a pretty dull tune.
At least “Bebop” doesn’t aspire to being much more than fun, while “The Wheel of Time” — adapted from Robert Jordan’s books — has a more epic scope that adds to the sense of dramatic inertia.
Rosamund Pike provides a degree of star power — or at least the most recognizable face — as the mysterious Moiraine, who comes to a small village where she enlists five young men and women on a quest to thwart the return of “the dark one,” with one member of the quintet, still unknown, representing the prophesied savior of their world.
The dark one’s slavering minions, naturally, are in hot pursuit, but the characters simply don’t possess enough pop to draw in those who don’t come immersed in the mythology, and the special effects are uneven. What emerges thus feels like another fantasy-based soap opera, populated by fantastic creatures and stiff dialogue filled with ominous warnings like “The dark one is coming for your friends.”
Put the blame on “Game of Thrones,” which prompted every streamer to take a hard look at fantasy concepts with literary underpinnings to tap into that genre. As noted, Amazon’s really big bet is an upcoming series based on “The Lord of the Rings,” which only feeds the sense that this represents a once-over-lightly version of it.
While there have been successes, the streaming world has also absorbed expensive failures as it tests these waters, with “Cursed” and “Jupiter’s Legacy” among Netflix’s recent one-season wonders.
On the plus side, it’s nice to see streamers taking chances on material that requires such ambition. Nevertheless, there’s not much to “Cowboy Bebop” that would merit saddling up for an encore, or anything about “The Wheel of Time” to provoke enthusiasm about the prospect of it marching on.
“Cowboy Bebop” and “The Wheel of Time” premiere Nov. 19 on Netflix and Amazon, respectively.

PrevPrevious‘The Wheel of Time’: What it is and how to watch it
Next’90 Day Fiance’: Tania Says She Doesn’t Want to Divorce SynginNext