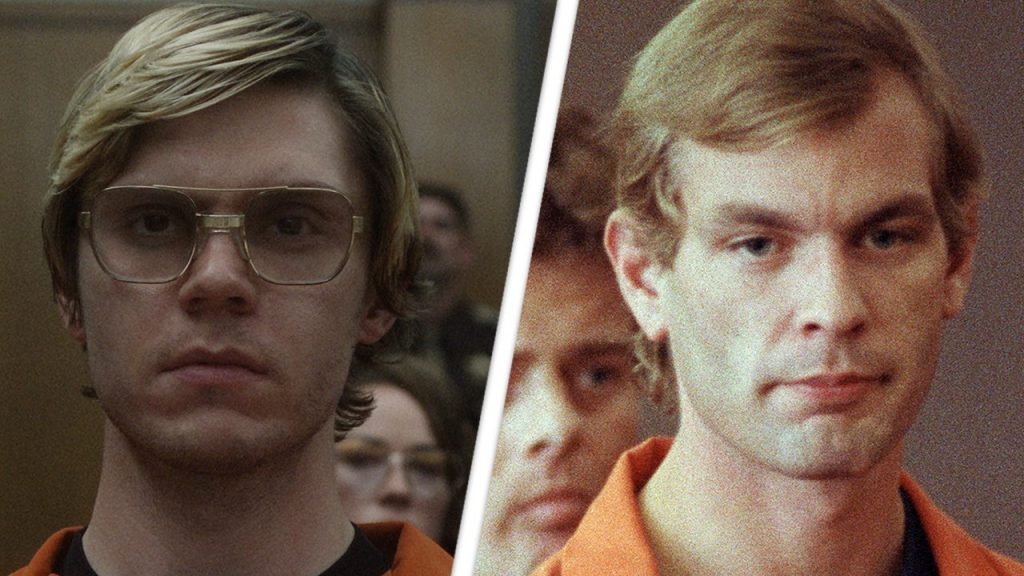 The series, meanwhile, marks Peters’ latest collaboration with Murphy after previously starring in nine installments of American Horror Story as well as Pose. It also follows his Emmy-winning turn as a detective on the HBO limited series Mare of Easttown, which required a far more restrained and grounded performance — a notable departure from his work on AHS.

“I just love to go big. I think it’s so fun, and some of my favorite actors are very big actors. But this was an opportunity to go the opposite direction,” Peters previously told ET about the challenge of doing something different onscreen. And given the nature of Mare, “we wanted to make it very natural and real and sort of toned down,” the actor continued, explaining that “it was an opportunity to take everything down a notch and be a little more still and subdued.”

That said, it’s likely audiences will get a mix of both from Peters, who has played killers before — but not one as notorious and as dark as Dahmer.

The life and crimes of gruesome serial killer Jeffrey Dahmer are about to be chronicled in the upcoming true-crime scripted drama, Dahmer – Monster: The Jeffrey Dahmer Story, with Evan Peters portraying the man who became known as the “Milwaukee Cannibal.”

Ahead of its debut on Netflix, the streaming platform has shared several first looks, including a brief teaser showing Peters as the serial killer as well as the first trailer, giving fans a closer look at the series created by Ryan Murphy and Ian Brennan and also starring Richard Jenkins as Lionel Dahmer, Molly Ringwald as Shari Dahmer, Michael Learned as Catherine Dahmer and Niecy Nash as Glenda Cleveland.

From 1978 until his arrest in 1991, Dahmer terrorized America by taking the lives of 17 men and boys. According to Netflix, Dahmer “is a series that exposes these unconscionable crimes, centered around the underserved victims and their communities impacted by the systemic racism and institutional failures of the police that allowed one of America’s most notorious serial killers to continue his murderous spree in plain sight for over a decade.”