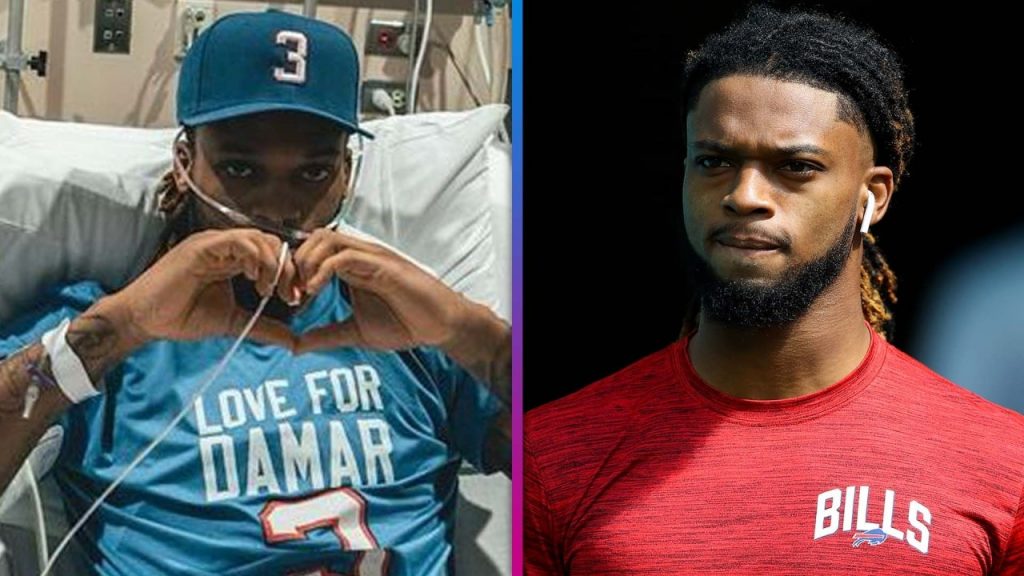 Damar Hamlin is on the road to recovery after collapsing during a game between the Buffalo Bills and the Cincinnati Bengals.

On Wednesday, the Buffalo Bills tweeted that Hamlin “has been discharged from Buffalo General Medical Center/Gates Vascular Institute, a Kaleida Health facility in Buffalo, New York.”

“Hamlin was admitted on Monday and went through a comprehensive medical evaluation as well as a series of cardiac, neurological and vascular testing on Tuesday,” read the message. “Jamie Nadler, MD, critical care physician and Chief Quality Officer at Kaleida Health, and the care team lead for Hamlin said, ‘We have completed a series of tests and evaluations, and in consultation with the team physicians, we are confident that Damar can be safely discharged to continue his rehabilitation at home and with the Bills.'”

Hamlin’s release comes a day after the Buffalo Bills tweeted that the athlete was back in Buffalo, New York, but remained hospitalized.

“Damar Hamlin remains hospitalized, but is in good spirits at Buffalo General Medical Center/Gates Vascular Institute, a Kaleida Health facility in Buffalo, NY,” read the message. “Hamlin is going through a series of testing and evaluation today.”

Hamlin also tweeted on Tuesday, “Not home quite just yet?. Still doing & passing a bunch of test. Special thank-you to Buffalo General it’s been nothing but love since arrival! Keep me in y’all prayers please! #3strong.”

The NFL player was released from the University of Cincinnati Health Medical Center earlier this week.

“Dr. [Timothy] Pritts and I are thrilled and proud on behalf of UC to report to you, that Damar Hamlin has been released and returned to Buffalo,” Dr. William A. Knight IV shared. “I traveled with him to the airport this morning, with our UC health air care and mobile care crew, including teammates who were with us on the field when Damar Hamlin collapsed.”

Last week, the Bills gave day-to-day updates on Hamlin’s progress. “Per the physicians at [University of Cincinnati Medical Center], Damar’s breathing tube was removed overnight,” the Bills said in a statement on Friday posted to Twitter. “He continues to progress remarkably in his recovery. His neurological function remains intact and he has been able to talk to his family and care team.”

The team also revealed that they were in contact with Hamlin. “Damar Hamlin FaceTimed into our team meeting today to talk to players and coaches,” the Bills tweeted. “What he said to the team: ‘Love you boys.’ ?.”

This good news came a day after the Bills shared another update on Hamlin’s health via Twitter. “Per the physicians caring for Damar Hamlin at the University of Cincinnati Medical Center, Damar has shown remarkable improvement over the past 24 hours,” the tweet reads. “While still critically ill, he has demonstrated that he appears to be neurologically intact. His lungs continue to heal and he is making steady progress.”

The statement concluded, “We are grateful for the love and support we have received.”

Additionally, Hamlin’s agent, Rob Butler, told CNN last Thursday that the athlete was awake and had been holding hands with family in the hospital.

The Bills also shared an update about Hamlin last Wednesday, in which they further revealed that the 24-year-old NFL star was showing signs of improvement since suffering a cardiac arrest during the game.

“Damar remains in the ICU in critical condition with signs of improvement noted yesterday and overnight,” the team’s tweet read at the time. “He is expected to remain under intensive care as his health care team continues to monitor and treat him.”

Butler also shared an update on Wednesday, telling ET, “Damar is still in ICU, but we are seeing progress. Definitely appreciate the outpour of support from so many different people across the country. Thank you for all the prayers.”

During the first quarter of the NFL matchup, Hamlin tackled Bengals wide receiver Tee Higgins, and both men appeared to be uninjured following the tackle. However, shortly thereafter, Hamlin appeared to stumble and collapse on the field. He was swiftly attended to by medical personnel, who reportedly gave the athlete CPR on the field. He was also placed on a stretcher, given oxygen and taken to the hospital via ambulance. NFL commissioner Robert Goodell announced the postponement of the game. The NFL also released a statement confirming that Hamlin suffered a cardiac arrest.

Per Hamlin’s uncle, Dorrian Glenn, the defensive back had to be resuscitated twice and was been on a ventilator to help with his breathing after sustaining damage to his lungs following the game tackle.

Hamlin’s teammates and family remained hopeful for his recovery, with the football star receiving support from both the Bills and the Bengals, who they faced off on the field with. Bengals head coach Zac Taylor addressed Hamlin’s recovery and the game during a press conference last Wednesday, and said he and the Bengals are “pulling” were Hamlin.

“Certainly, we’re pulling for Damar,” Taylor said. “Hoping for the most positive outlook and looking forward to him seeing all the support he’s getting from his team, his community, people around the league, his family. That will be a great day when he’s able to see that.”

In addition to sharing his support for Hamlin, Taylor also praised the medical staff who were on-hand during the game, as well as the officials, who stopped play to assess the situation.

“All the medical professionals that were involved. The Bills trainers, the Bills doctors, our trainers, our doctors, the paramedics, the emergency response team — they were on it, they were composed,” the Bengals’ coach shared. “It was obviously a complicated situation on the field that everybody was trying to process, and for me personally, being down there and seeing the composure that everybody involved had.”

Taylor said the medical staff were not only prepared but also gave Hamlin the best chance at making it through the scary incident.

“So that was well done by all them, and I was really impressed and thankful for the work they put in to be ready for moments like that, and the way that they handled it was important, I think, for everybody to see,” he continued.

Taylor went on to thank the University of Cincinnati Medical Center hospital for their treatment of Hamlin and providing the football player and his family the privacy needed as he fights to recover from his cardiac arrests and complications he suffered following the game.

As for when the game will be rescheduled between the two teams, it was announced last Thursday that the NFL ruled the week 17 game a “no contest” and has canceled the matchup between the pair.

Damar Hamlin Released From Hospital and Back in Buffalo