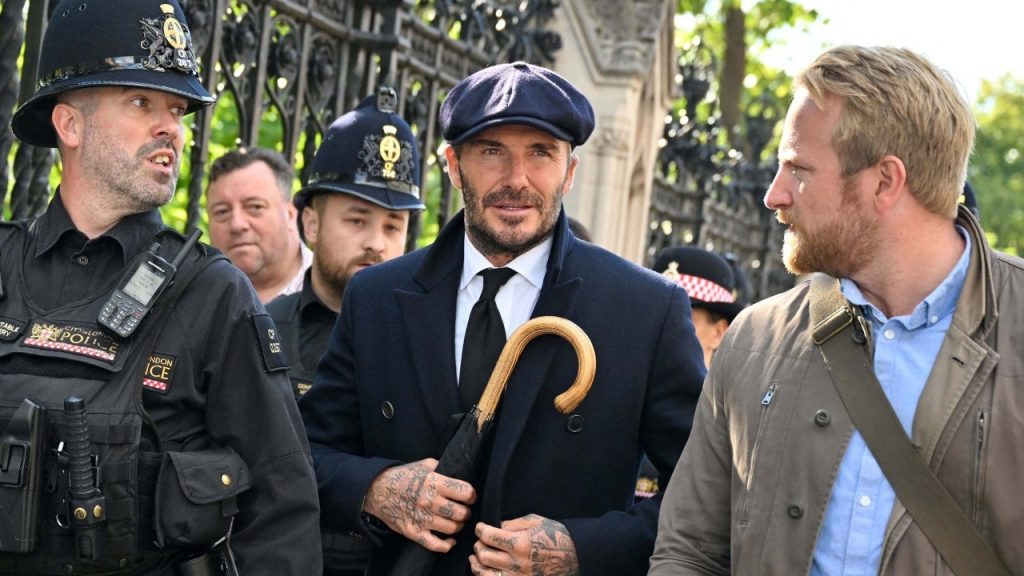 As crowds waited in the historic London queue to pay their respects to Queen Elizabeth II, one famous face stood out. British soccer veteran David Beckham joined the queue at 2 a.m. local time, waiting for almost 14 hours with members of the public to see the late British monarch’s coffin inside of Westminster Hall.

Once inside, Beckham, 47, looked visibly emotional, wiping away tears as he walked past the queen’s coffin, which is currently lying-in-state for members of the public to pay their respects ahead of Monday’s State Funeral.

Prior to seeing the coffin, Beckham spoke with ITV from the queue, while wearing a black suit, coat, hat, and carrying an umbrella.

“I thought by coming at 2 a.m. it was going to be a little bit quieter. I was wrong,” Beckham told the British network at 2 p.m. local time when he was still waiting in the line. “Everybody had that in mind. But the people here, all ages… everybody wants to be here, to be part of this experience and celebrate what Her Majesty has done for us.”

The father of four explained why waiting to see the coffin was so important to him and his family.

“I grew up in a household of royalists, and I was brought up that way, so if my grandparents would have been here today, I know that they would have wanted to be here,” he shared. “So I’m here on their behalf and on behalf of my family and obviously just to celebrate with everybody else here.”

Beckham, who met the queen several times throughout his career, acknowledged the impact of her legacy.

The queue to view the queen’s coffin grew so long on Friday morning that it was announced no more members of the public would be permitted to join it for at least six hours. The BBC reported that the wait time was around 14 hours.

Both David and his wife, Victoria Beckham, honored Queen Elizabeth on their social media pages after news of her death broke last week.

“Today is a very sad day not just for our country but for the entire world,” Victoria wrote on Instagram. “I’m deeply saddened by the passing of our beloved Monarch, Her Majesty The Queen. She will be remembered for her steadfast loyalty and service and my thoughts are with the royal family at this incredibly sad time.”

The Beckhams have interacted with the royal family on numerous occasions, including attending the 2011 royal wedding of Prince William and Kate Middleton and the 2018 wedding of Prince Harry and Meghan Markle.

For more on Her Majesty’s death and Queen Elizabeth II’s funeral, check out ET’s ongoing coverage.