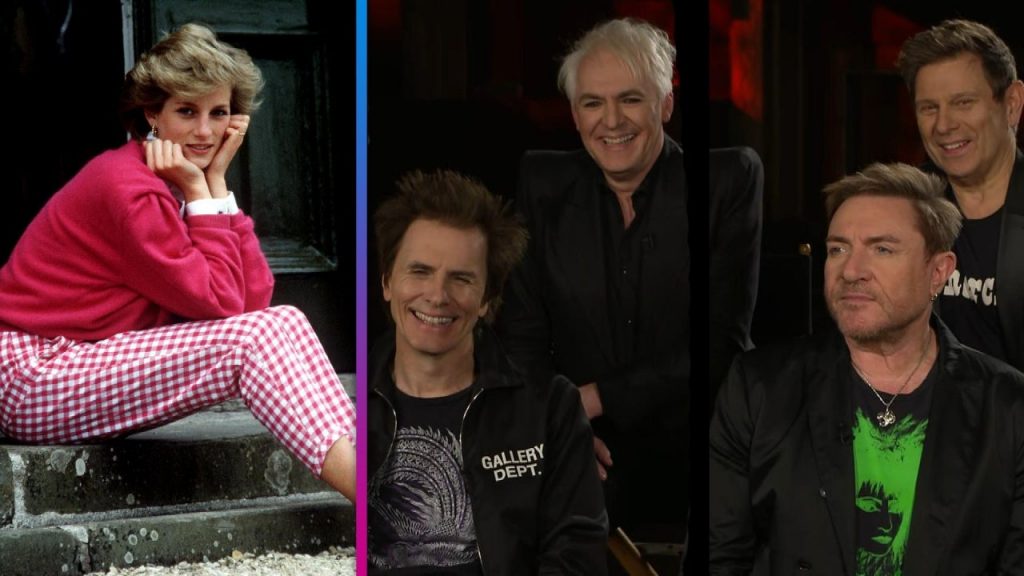 Duran Duran is recalling their special connection to Princess Diana. In a new interview, John Taylor, Nick Rhodes, Simon Le Bon and Roger Taylor tell ET’s Kevin Frazier which of their songs the late royal loved most before her death in 1997.

“When we met Harry and William, they said, ‘Oh, we used to sit in the back seat and mom would play ‘Wild Boys,’ and we will sing along,'” John recalls of Diana’s now-grown sons. “That stuck with me. That idea stuck with me that the little boys would be going ‘wild boys,’ that that would be a moment for them.”

The 1984 track was just one of many Duran Duran songs that Diana loved, a special truth that has stuck with the band all of these years. It’s with Diana’s love of their group in mind, that they signed up to perform at the Party at the Palace, which was part of the late Queen Elizabeth‘s Platinum Jubilee in June.

“We have a bit of an attachment to the royal family, with Diana, because she was a big fan of [the] band and a big supporter early on,” Roger says. “There’s always been that kind of emotional thing going on with the royal family, so it felt great to be there.”

The fact that Queen Elizabeth died just three months later, makes the group especially grateful that they got one last chance to honor the late monarch.

“Being British, we’ve never known anything else but the queen… She’s a remarkable human being,” Nick says. “I think she made very good judgments for the country. We all appreciate that. She gave her life to service, so sort of saying thank you at a show for her remarkable reign was fun.”

“She affected all of our lives so much,” Simon adds. “We grew up with her values and, in many ways, we all have assumed many of her values. She influenced the nation in the way they think. That doesn’t go just because she’s passed, that stays with us.”

ET’s chat with the band came ahead of the premiere of their docu-concert film, A Hollywood High, at Los Angeles’ Dolby Theater. The film, which is in theaters now, tells the untold L.A. story of the band.

The flick also features Duran Duran performing a concert on an L.A. rooftop, with the iconic Capitol Records building visible in the distance.

“There’s very few shows on rooftops that we know of, aside from the obvious Beatles show,” Nick says. “But yeah, there was something very appealing about it.”

The film’s release kicks off an exciting time for the group, who will be inducted into the Rock & Roll Hall of Fame on Nov. 5.

“The Rock and Roll Hall of Fame, it’s an interesting thing. It’s not our natural kind of territory. For many years, we felt it was a boys club that was closed to these boys, but they’ve kind of opened their arms to us,” Simon says. “I think I, for one, I’m seeing it in a different light. I’m really proud of the fact that we’re going to be inducted, actually.”

“We’ve never really gotten a lot of accolades from the industry. We’re a populist, we’re a people’s band… and we’re good with that,” John adds. “I think a long time ago, we kind of were reconciled to not being honored in that way, so when it comes along, we’re like, ‘Oh, cool.'”

The guys are thrilled that they still get the chance to work and spend time together, with Roger telling ET, “There’s something that just keeps pulling us back. When we get back together, it’s always amazing. What comes out is really incredible.”

“After COVID, it felt like what we do has significance in that it brings people of all stripes together and they f**king dance and they sing. It’s brainless, but it’s important in its brainlessness,” John adds. “We’ve got to do that now. We can’t just be arguing about politics and policies the whole day. Sometimes you [have to] just kind of sing and dance and just hang.”

“I slightly suffer from impostor syndrome a little bit. I know that when we’re together, that I’m not an impostor,” Simon chimes in. “When I’m in Duran Duran, I am the performer that I want to be. I know that whatever I did on my own, it’s not even a quarter as good as what the four of us create together.”