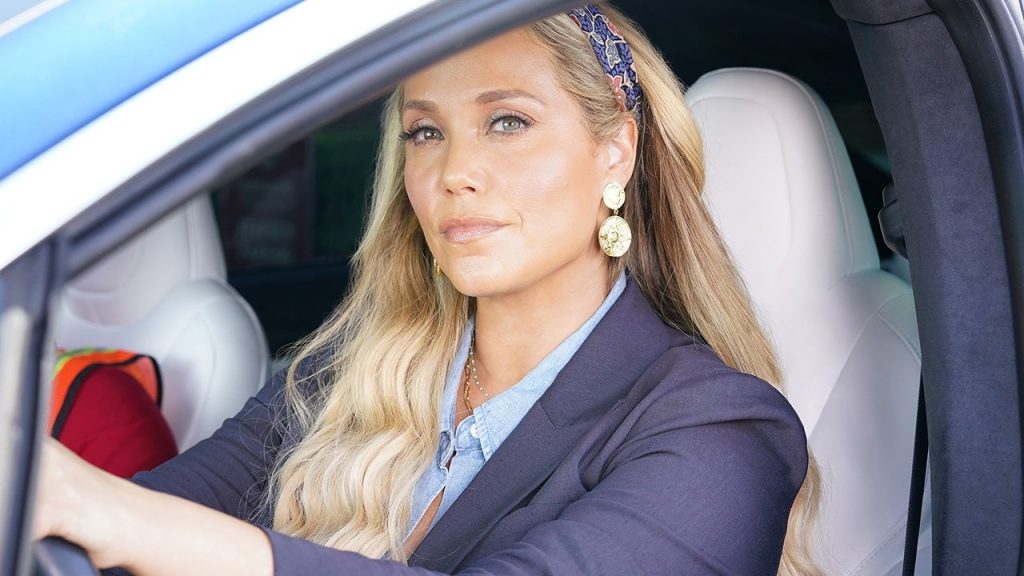 Peacock’s celebrated revival of Saved by the Bell is back for another season. And ahead of its Thanksgiving premiere, longtime star of the franchise, Elizabeth Berkley, opens up to ET’s Leanne Aguilera about returning as Jessie Spano, who is now the Bayside guidance counselor and mother to Jamie (Belmont Cameli), all of the meta jokes, including an episode dedicated to the actress’ cult classic film Showgirls, and which star from the original series she’d like to see return next – if the series gets renewed for a season 3.

In season 1, executive producer Tracey Wigfield reintroduced audiences to the world of Bayside High by bringing her quick wit and 30 Rock sensibilities to the series. This time around, a new generation of students roam the halls while the grownup cast from the original, including Mario Lopez as football coach and Phys Ed teacher A.C. Slater, watch as they repeat some of the same antics.

While the teens of today drive the story, there’s no shortage of callbacks to the original franchise, including the films in Hawaii and Las Vegas and The College Years spinoff. As a result, “I just felt like each day we were sitting on some great secret,” Berkley says of all the “Easter eggs imbedded in a scene.”

In season 2, that sees Jessie and Slater briefly returning to the Malibu Sands Beach Resort, where they all worked during their summer break, and Slater saying at one point, “We don’t have the budget for a Stacey Carosi flashback” as Jessie recalls highlights from their younger days.

“It’s genius,” Berkley says of the quick reference to Leah Remini‘s character, who appeared in six episodes during season 3 of the original run. “That line and the way Mario delivers it is hysterical.”

In addition to those meta moments in the show, there’s a reference to Berkley’s career that longtime fans will thoroughly enjoy in season 2. Halfway through the season, during episode six, the series sees the actress making several references to her starring role in the 1995 Paul Verhoeven film Showgirls, which was her first major project after leaving Saved by the Bell.

“We definitely had a lot of fun,” Berkley says. “Tracey and [writer] Yamara Taylor approached me pretty early on… and they said, ‘We have this idea.’ And Tracey was like, ‘I don’t know how you’ll feel about it but would you be game to explore this?'”

“I don’t want to give too much away, so people can see it for themselves,” she continues. “But I said to her, ‘Well, as you’re getting to know me, you know that I have a great sense of humor. As long as we’re not mocking it but actually that it is truly funny and smart. It is the only way I know how to do things.'”

And then once she saw the script for it, Berkley says, “I’m in. We’ve got to do this. I knew it was going to be good.”

Aside from all the references, season 2 of the revival also sees the return of Lark Voorhies as Lisa Turtle, who only appeared via video screen in the first season much to the disappointment of longtime fans. This time, however, the fashion designer reunites with the whole gang, including Tiffani Thiessen as Kelly Morris and Mark-Paul Gosselaar as Zack Morris.

“Having Lark on set was incredible,” Berkley says. “It was like having an old best friend that went off to a different college and had a different path but then you came back together. There was an ease and comfort. And reminiscing was really fun.”

Unfortunately, there’s no Hot Sundae reunion. But luckily for fans, Kelly, Jessie and Lisa get to spend some quality time together in season 2. And who knows, maybe in the future, the girl group will rise again. “We all wanted to be on those mini trampolines,” Berkley says. “We’ve got to do that.”

Sadly, though, Dustin Diamond was not able to reprise his role as Screech before he died of cancer in February 2021. But the series will pay tribute to him when it returns. “Dustin was such a life force and such an incredibly brilliant comedy actor,” Berkley says, adding that, “To come back together and be missing a huge, huge piece… it didn’t feel complete for sure. But I feel good about the care and the heart with which we all were able to honor him and celebrate him.”

But when it comes to Remini ever reprising her role as Stacey, Berkley says it’s not off the table. “I talked to her early on before season 1. We chatted a bit and I said, ‘It would be a dream to have you back,'” the actress says, adding that there are so many other locations aside from the beach club that she’d like to revisit in the future. “There are so many incredible places that we all traveled to outside of Bayside.”

So, if the series gets renewed for a third season, “we would love to do that,” Berkley says, teasing, “You just never know who can come visiting Bayside.”

Saved by the Bell season 2 premieres Wednesday, Nov. 24 on Peacock.

‘Saved By the Bell’ Season 2 Trailer Is Here

Lark Voorhies Back on ‘Saved by the Bell’ Revival

‘Saved by the Bell’ Season 2: See the First Pics

PrevPreviousDominic West’s Real-Life Son Cast as Prince William in ‘The Crown’
Next‘Emily in Paris’ Season 2 Trailer: It’s About to Get Even MessierNext