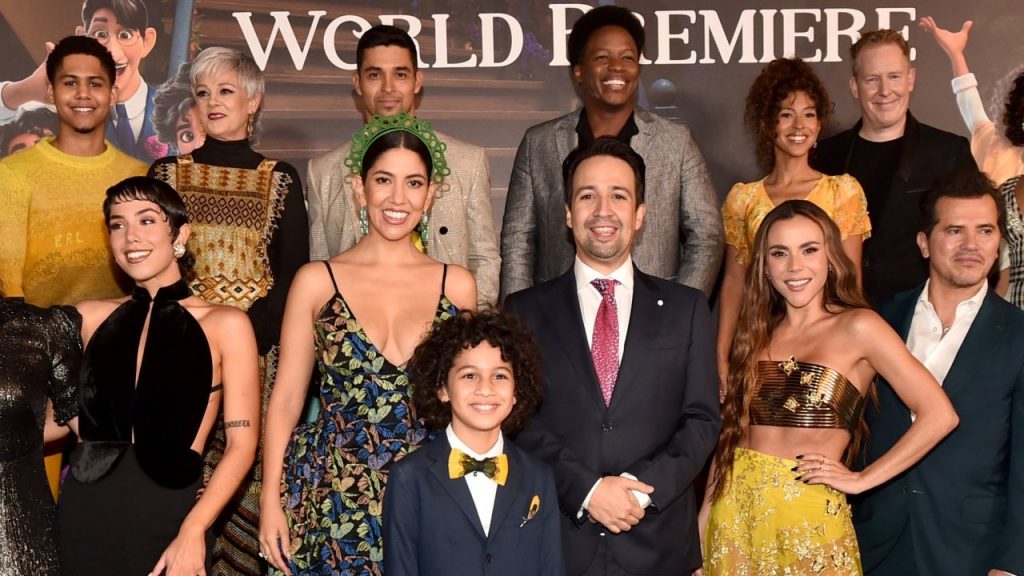 Welcome to the enchanting world of Encanto.

Disney’s latest animated film centers around the Madrigal family, who live in an enchanted town in the mountains of Colombia. While each family member has their own unique magical powers, Maribel (Stephanie Beatriz) is the only one without a special power. However, when the family’s magic is under threat, she may be the only one able to save them.

Directed by Byron Howard and Jared Bush and co-directed by Charise Castro Smith, Encanto features original songs by Lin-Manuel Miranda. The movie not only marks Walt Disney Animation Studios’ 60th film, but the first centered around Colombian culture and with a predominately Latinx cast. And as Miranda and the film’s cast told ET, they couldn’t be prouder of the incredible story they’re sharing with the world.

“Walt Disney Animation Studios released this little memory lane tribute video to every classic that has been part of the Disney legacy, and the last film reflected on that was the 60th movie, which happened to be Encanto. I couldn’t stop smiling and I started shedding tears because I had just seen the movie,” Wilmer Valderrama — who voices Agustin Madrigal, Mirabel’s father — told ET’s Matt Cohen. “I realized that Encanto is the accumulation of so many of these stories and it’s riding on the back of all these iconic classic movies that taught us so much about ourselves, about wonder and dreaming. So to be part of that legacy, it’s quite an incredible experience, and it’s an emotional one. It’s actually very emotional for all of us.”

Diane Guerrero, who voices Isabela Madrigal, Mirabel’s oldest sister, added that “it’s beautiful” to see the film get added to “that incredible collection” and hopefully “encourages more stories like these” to be told. “Because they’re beautiful and special, and everyone’s story is deserving of that exploration.”

Miranda, who wrote eight original songs in both Spanish and English, expressed that he tried to “capture the complexity of an inter-generational family” with the story.

“I grew up in a three-generation household,” he said, adding, “And how we see ourselves versus the roles our family puts us in. That’s complicated, meaty stuff and it’s really fun to write songs to speak to that experience.”

For John Leguizamo, who was born in Colombia, he shared how “amazing” it is to see his culture be shown onscreen. “It’s amazing! How lucky are we to be in this time, to be in this film,” the actor, who voices Bruno Madrigal, Mirabel’s excluded uncle, said. “I’m half Colombian and here we are representing our own people and in a beautiful, funny, touching film. It’s everything.”

What brings Encanto to life, like many of Disney’s classics, is the music and the native Colombian beats that are incorporated. Colombian artists like Carlos Vives, Sebastian Yatra and Maluma are featured on the film’s soundtrack.

Yatra, who sings “Dos Oruguitas,” expressed his emotions of working on the single and “the responsibility of really giving and conveying a lot of emotion to this scene that is going to make people connect more and more with my country.”

“There was a lot of importance in this message for me and the team at Disney and Lin-Manuel, they made it super easy and they were with me every step of the way,” he said.

“This movie really captures the essence of all of that. The beats, the songs, what is that sound that describes us? And I think Lin-Manuel [captured that]. It is a journey of color as well. It’s one of those films where I’ve seen that it really inspires you to move like we learned to move when we were little kids.”

Guerrero, who is of Colombian descent, noted how beautiful it was to finally be able to express the sounds that she grew up with through the animation in Encanto. Sharing how she listened to these beats from when she was in her mother’s stomach, she said, “I’ve always wanted to express what it feels like to listen to this stuff and to hear it, and to feel that beat and to feel that rhythm. And to go along with this story, the story of my family goes along with this music and now I feel like people are going to get to experience that.”

Of course, through music, people can express a range of emotions, as Jessica Darrow put it. The actress sings “Surface Pressure” as Luisa Madrigal, Mirabel’s second oldest sister, in the film. “When the struggle gets real, we turn the music louder,” she shared, adding that the track is “very much an example of when it gets really hard, you just have to keep going.”

“But in those moments when you are experiencing that joy, it’s a music video, it’s a fun time and you’re gonna go full out,” she added. “Even though there’s something going on in the inside, it’s all good on the outside and you have a good time…It’s a journey that I think Disney music does [well].”

With most, if not all, the people involved in the film having grown up watching Disney films, being a part of Encanto is beyond special.

“To be alive and at a time where Disney is making its 60th animated film and then they’ve chosen to set it in Colombia and to show the beauty of the country and to center the story around a family in that country, it’s so incredible,” Stephanie Beatriz stated. “It speaks to what Disney does best, which is make you feel like you identify with the heroes of the stories. Even if it’s a crab, even if it’s a lion, even if it’s a princess and it’s some unknown land or even if it’s a Madrigal, you see yourself in the story and it’s so special to be a part of that.”

The film, Darrow added, will also bring some light amid the past couple of years amid the pandemic and perfect to watch with your loved ones.

“This film is about family and the importance of that, especially the fact that this film is coming out of the pandemic we’re still in,” she explained. “But it is during that time [that] we realized, ‘Who do we have at the end of the day?’ When it feels like there’s nothing left, you have to bring it back to the roots. And not only just our immediate family, our chosen family too, like, the people who are really there for you and see you for who you really are. I think this is a film that represents that so beautifully.”