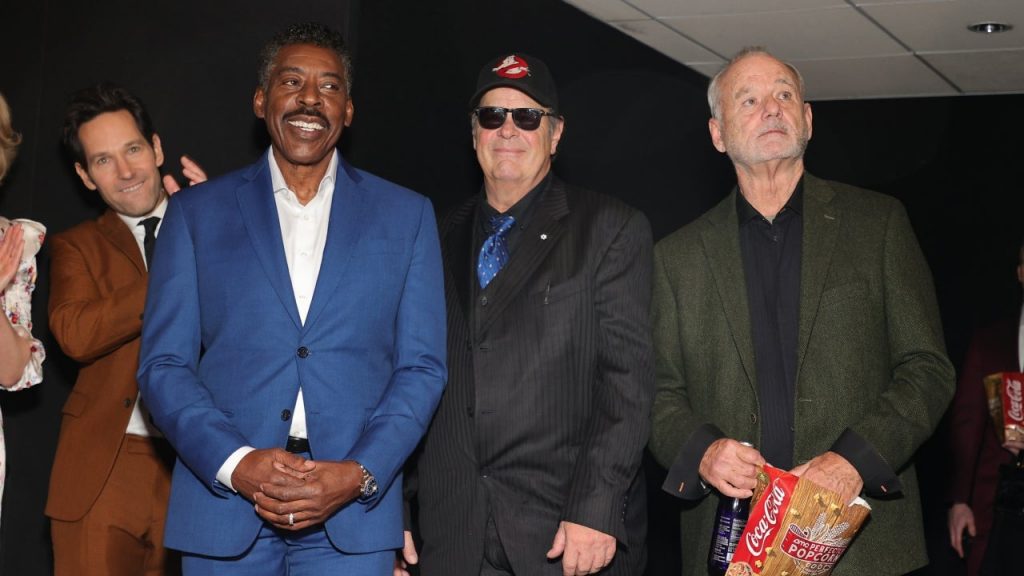 It was a special Ghostbusters reunion!

Bill Murray, Dan Aykroyd and Ernie Hudson reunited at the Ghostbusters: Afterlifepremiere in New York City on Monday, where they remembered their late co-star and dear friend Harold Ramis, as well as shared how it felt to suit up again.

“Well, he would always be on time, so he would have already made us look bad,” said Murray of Ramis while chatting with ET’s Lauren Zima. “He was very punctual and he would be just looking at us, staring at us. He was punctual and prepared and we’re neither of those things. We’re raw, unfinished talent. We’re unfinished diamonds. We’re very rough.”

The actors starred in the original 1984 film and its 1989 sequel, Ghostbusters II, with Murray, Aykroyd and Hudson reprising their iconic characters for the new movie. When asked how it felt to jump into their old wardrobe, Aykroyd instantly replied, “Like yesterday to me. It felt like I was called back to service.”

Hudson then shared, “I saw Danny in his jumpsuit, Bill and I started crying. So apparently it was very important to me.”

Murray added, “I really never expected to still have another paranormal problem.”

Aykroyd, who along with Ramis wrote the first two Ghostbusters, noted that he “planted the seed and others watered the branches.” He praised the new talent and storyline, saying, “We have an amazing cast, great director and everybody was doing their best to make it the right time, and it is the right time for it. Before it wasn’t, now it is.”

Murray shared that he hadn’t seen the new flick, saying, “People have been walking out crying, so I don’t know if that’s good news or bad news.”

Harold, on his end, said he loved working with the other actors, “They love the franchise. They got into it. They were really brilliant, talented children. I learned from them.”

Murray also noted that the young talent “didn’t call it a franchise. They called it a movie, a film or something. It was just a job. But it is a franchise.”

Directed by Jason Reitman, Afterlife follows the grandchildren of the late Egon Spengler (Ramis) move into the “creepy old farmhouse” he left them in the small town of Summerville. In discovering their grandfather’s ghostbusting past, Phoebe (Mckenna Grace) and Trevor (Finn Wolfhard) appear to unleash the undead once again and must also realize they ain’t afraid of no ghost.

See more from the red carpet, including Rudd talking about working with Murray, in the video below. Ghostbusters: Afterlife arrives in theaters on Nov. 19.

Paul Rudd Is Attacked by Marshmallow Men in ‘Ghostbusters: Afterlife’