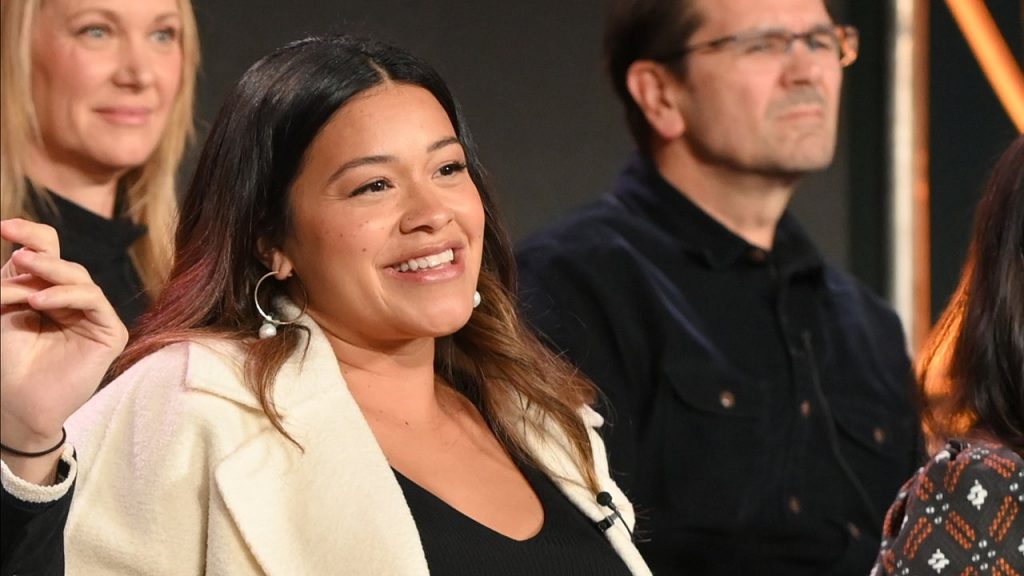 Gina Rodriguez showed off her growing baby bump on Wednesday as she promoted her new ABC comedy, Not Dead Yet, at the Television Critics Association press tour. The 38-year-old actress and executive producer, who revealed her due date is Monday, reflected on the journey of making the show while also going through her first pregnancy journey.

Rodriguez announced in July that she and her husband, Joe LoCicero, were expecting their first baby. As she shared during the Not Dead Yet session, the pregnancy wasn’t exactly in their plans for the year, as she would soon head into production on the freshman series. The actress shared how they were able to pull off hiding her growing bump during the duration of the shoot, crediting the producers and directors for coming up with unique ways to pull it off.

“It’s my first time experiencing this, doing this [while pregnant] and the [producers] have been so loving and supportive of me accidentally getting pregnant right before the show started — out of love, obviously,” she quipped. “My husband, we’re very excited about it, but it obviously wasn’t planned. But it was, he planned it.”

“[Director] Dean [Holland] was always there to make me feel very comfortable about the experience because it was never new. He and the other directors came up with very creative ways to either cover the belly, whether it was costumes or in my cubicle or a plant or a refrigerator,” Rodriguez continued. “But the greatest thing, and I’ll never forget it, because I thought at each stage, ‘Oh my god, I’m so big, I can’t imagine hiding it. How are we going to hide it?’ Now I look back at that baby bump and I’m like, ‘That was nothing. That was nothing.’ I was so afraid.”

During the half-hour Q&A session, Rodriguez lovingly rubbed her bump multiple times while co-star Hannah Simone, who was seated next to her, checked in on her a few times and sweetly rubbed her belly as well.

Producers thanked Rodriguez and her unborn baby for having both of them be part of the Not Dead Yet experience. “It was such a huge part of production in the most wonderful way. It was such an honor to have you guys together with us,” Holland said, prompting an emotional Rodriguez to respond, “You’re going to make me cry.”

“And I had so much support from these incredible human beings on set, always. From the sisterhood and the help to the support and [co-star Rick] Glassman would text me, ‘Thank you for doing this. I know it’s tough. I want to complain but then I see you. I won’t complain!’ It just made me feel so loved and supported, and it was a huge gift,” Rodriguez shared.

Not Dead Yet follows Nell Serrano (Rodriguez), a broke and newly single self-described disaster, working to restart the life and career she left behind five years ago. When she lands the only job she can find — writing obituaries — Nell starts getting life advice from some unlikely sources, the dead people whose lives she’s writing about. The series will welcome ghost cast members Ed Begley Jr., Rhea Perlman, Martin Mull and Brittany Snow in its first season, among other guest stars.

With the series launching next month, first on Rodriguez’s priority list is giving birth with her due date just days away. She admitted on the panel she “can’t see past the birth.” “It’s like a void past there,” she confessed.

“I’m going to fall and I’m going to trip. I’m going to ask for help. I’m going to need to lean on all the incredible people around me and I’m going to have to ask for forgiveness and I have. I will forever be someone who’s shedding like an onion and peeling away at the layers of what I think I know and what I do know and what I’m good at. And Nell is that and she’s so much that,” she said. “It’s great to play somebody who gets to fail but gets to learn from her failures… It’s really cool to be playing this at a time where I’m now just continuously unraveling and rebuilding myself.”

Not Dead Yet premieres with back-to-back episodes Wednesday, Feb. 8 at 8:30 p.m. ET/PT on ABC.

Pregnant Gina Rodriguez Says Husband is Training to Be Her Doula