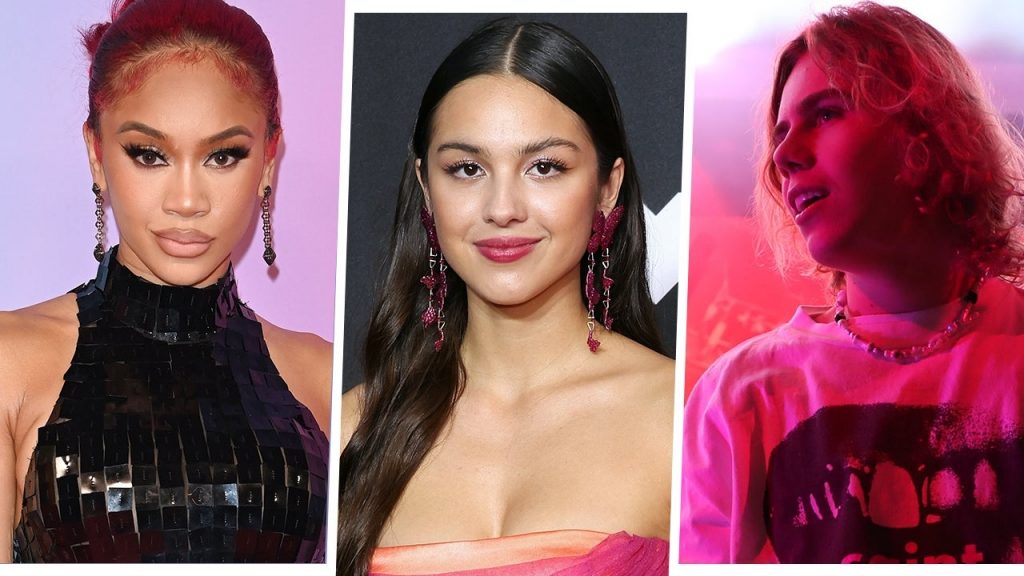 The 2022 GRAMMY nominations were announced on Tuesday, and that means a brand new roster of Best New Artist nominees!

Always one of the most buzzed-about categories on music’s biggest night, the GRAMMYs have been on a Best New Artist hot streak in recent years, with the last three winners of the award — Dua Lipa, Billie Eilish and Megan Thee Stallion continuing to top the charts and earn more nominations after their introductory honors. Will the trend continue this year?

The Best New Artist nominees for 2022 are a genre-spanning, chart-topping class which includes this year’s GRAMMY breakout rookie, Olivia Rodrigo, who landed a nod in each of the Big 4 categories, TikTok hitmaker The Kid Laroi, Billie Eilish’s brother and producer Finneas, country star Jimmie Allen and rappers Saweetie and Baby Keem. There are also indie groups like Glass Animals and Japanese Breakfast, as well as up-and-coming international acts, like Arlo Parks and Arooj Aftab.

Whether you’re just tuning into the artist now or already count them as one of your faves, ET has compiled this handy guide to get to know this year’s nominees.

Aftab, a 36-year-old Pakistani composer and vocalist, is a Berklee grad who independently released her debut album, Bird Under Water, to critical acclaim in 2015. She gained greater recognition in 2021 with her third album, Vulture Prince, thanks in part to a shout out from Barack Obama, who listed her song “Mohabbat” as one of his summer playlist favorites. She is also nominated in Best Global Music Performance category, for “Mohabbat.”

Allen’s having quite the year, winning New Artist of the Year honors at both the 2021 ACM Awards and the 2021 CMA Awards earlier this year. After wrapping up his seventh-place stint on Dancing with the Stars, the country star is now in firmly in the GRAMMYs spotlight as well, with acknowledgment for his breakthrough EP, Bettie James.

A cousin of 2014 Best New Artist nominee Kendrick Lamar, Baby Keem — aka Hykeem Jamaal Carter Jr. — broke onto the scene in 2019 with his single “Orange Soda.” Following two mixtapes and four EPs, he released his debut album, The Melodic Blue, in September 2021, to critical and commercial success. At the 2022 GRAMMYs, Keem is also nominated with Lamar for Best Rap Performance for their track “Family Ties,” and both rappers are featured on “Praise God,” from Kanye West’s Album of the Year nominee, Donda.

Previously best known as producer-older brother to 2020’s Best New Artist winner, Billie Eilish, Finneas has made a mononymous name for himself in recent years, starting in October 2019 with the release of his debut EP, Blood Harmony. He released his debut studio album, Optimist, last month, led by the single “What They’ll Say About Us” as well as his collaboration with Ashe, “Till Forever Falls Apart.” In addition to Best New Artist, Finneas, already an eight-time GRAMMY winner as a songwriter and producer, is nominated with his sister for her Song of the Year track, “Happier Than Ever.”

One of the latest acts to use viral fame as a springboard to success, the British indie rock group earned their Best New Artist nomination nearly a decade after releasing their first EP. While Glass Animals had a platinum single back in 2014 with the single “Gooey” off their debut album, Zaba, they hit it huge in 2021 with their track “Heat Waves,” which charted in the Top 10 in the U.S. and several countries around the world, and became a hugely popular sound on TikTok.

Another nominee having quite the prolific year Japanese Breakfast is nominated for both Best New Artist and Best Alternative Music Album for their third album, the joyful, dreamy indie-pop Jubilee. Additionally, frontwoman Michelle Zauner released her critically acclaimed memoir, Crying in H Mart, which debuted at No. 2 on the New York Times nonfiction best-seller list. The book is also set to be adapted into a movie, for which Japanese Breakfast will, of course, provide the soundtrack.

The Kid LAROI, real name: Charlton Kenneth Jeffrey Howard, started rapping and singing when he was 14 years old, growing up in New South Wales, Australia, and now, just four years later, he’s one of the hottest hitmakers in the world. Embracing the melodic pop rap style, The Kid LAROI has already had five singles off of his debut mixtape, F*ck Love, including his two mega hits “Without You” and the Justin Bieber collab “Stay,” both of which got major boosts thanks to TikTok popularity.

Anais Oluwatoyin Estelle Marinho, known professionally as Arlo Parks, is a British indie folk and R&B singer who had her major breakthrough moment in 2021 with the release of her debut album, Collapsed in Sunbeams, led by singles “Black Dog” and “Caroline.” In addition to another 2022 GRAMMY nom for Best Alternative Music Album, the album scored her nominations for Album of the Year, Best New Artist and Best British Female Solo Artist at the 2021 Brit Awards, and also won the 2021 Mercury Prize for best album.

The High School Musical: The Musical: The Series star broke out on her own in a massive way in 2021, starting with her debut single, “drivers license,” which was undeniably one of the biggest songs of the year. (It even got its own SNL sketch!) Her debut album, Sour, followed, with its first five singles all going at least platinum. Rodrigo seems well poised to follow in Billie Eilish’s footsteps as a wunderkind winner at the 2022 GRAMMYs, earning nods in all of the Big 4 categories, as well as Best Pop Vocal Album and Best Music Video for “Good 4 U.”

Saweetie hasn’t even released her debut album yet, and still, she’s more than deserving of Best New Artist honors, spinning viral fame on Instagram into a burgeoning career as one of rap’s biggest up-and-coming female stars. Her debut single, “Icy Grl” was followed in recent years by “My Type,” “Tap In,” and her 2021 Doja Cat collab “Best Friend,” with each track proving to be hottest than the last. Her debut album, Pretty Bitch Music, is due out in 2022.

The 64th Annual GRAMMY Awards will take place on Monday, January 31, 2022 at 8 p.m. ET / 5 p.m. PT and broadcast live on CBS. Follow along at ETonline.com for everything you need to get ready for music’s biggest night, including how to watch, GRAMMYs performers and more.