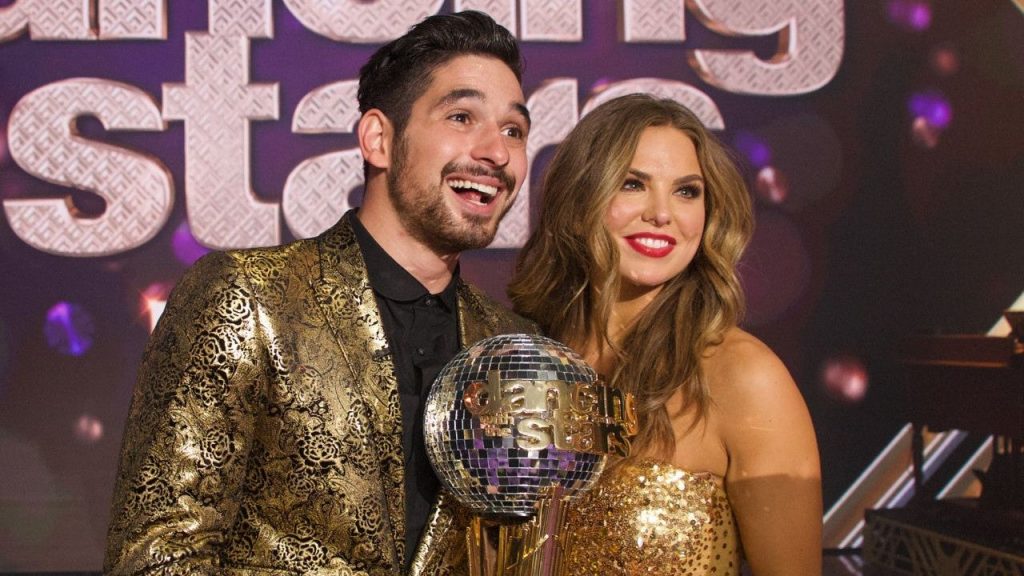 Hannah Brown and Alan Bersten‘s time on Dancing With the Stars wasn’t always amicable. The former Bachelorette and the pro dancer were partnered together during season 28 of DWTS in 2019, and Hannah writes about the emotional journey in her new memoir, God Bless This Mess, which ET spoke to her about ahead of its release.

Prior to DWTS, Hannah had been going through a challenging time in her life. She had split from her Bachelorette fiance, Jed Wyatt, after it came out that he had a girlfriend when he came on the show. Things hadn’t worked out with her runner-up, Tyler Cameron, and she had lingering feelings for the then-Bachelor, Peter Weber.

Amid the drama in her love life, Hannah was tapped to compete on the show. She saw the opportunity as a way to combat the anxiety and depression she was feeling in the wake of The Bachelorette, and jumped at the chance.

Her romantic life managed to still be a topic of conversation, though, as rumors swirled that she and her partner, Alan, were dating. That was the furthest thing from the truth, though.

“That is a crazy experience,” she told ET of DWTS. “There’s just a lot of high emotions. Alan will always be a dear friend of mine but in the experience, even he would admit, it could be volatile. We could love each other, hate each other in the next second.”

ET has reached out to Alan’s rep for comment.

In the book, Hannah writes about how she and Alan were “not compatible people,” noting that they “had the most volatile relationship of the season, by far.”

“It was either we acted like best friends and true partners, or we couldn’t stand each other,” she writes. “He’d push me too far in rehearsals, and I’d say, ‘Get out of my face. I’m not doing this,’ and he’d say, ‘You’re lazy! You’re not trying!’ While I worked hard and focused on the prize, and concentrated on becoming a better dancer every day, the process itself kept bringing out the worst in me. I was emotionally unwell.”

Looking back on it now, Hannah told ET, “I think we had a shot at doing well and he pushed me really, really hard.”

“He knew I could do it, but, at the same time, I was in my emotional state. I probably needed to be seeking some help in that. It was just really hard for us,” she said. “We definitely communicate differently. We had a really hard time. Harder than it it looked on the show. We [would] openly get into arguments.”

Despite their strained partnership, Hannah and Alan ended up winning DWTS. In her memoir, Hannah shares a journal entry from the night she won the show. In it, she reflects on feeling “empty” after her big win.

“I didn’t hear them announce my name as the winner, because I was perplexed by how numb I felt. Why wasn’t I excited?” she writes. “… I was happy for the excitement and celebration Alan was feeling, but the feeling I had was ‘Well… I did it. What’s next?’ I hate admitting this. It shouldn’t have been that way. I worked so hard but I was so miserable. Winning and having no feeling, and still feeling defeated because the high wasn’t all you thought it would be I think is more heartbreaking than losing and feeling the sting of the defeat.”

Her relationship with Alan has improved exponentially since the show; they’ve made TikToks together, and she openly supported him and his partner, Amanda Kloots, on the most recent season of DWTS, which aired its finale on Monday.

Still, Hannah decided to share her and Alan’s DWTS struggles in her book because, she told ET, “it was important for me to show that not everything is how it seems.”

“Overall, I wish him the best, and I know that he does for me too,” she said. “… You don’t really know what’s going on behind the scenes, and people can make all these narratives. I mean, people thought that we were in a relationship! You have no idea what’s going on.”

Knowing the truth, Hannah said, allows “you to find out more about a person. What are their struggles? What are their weaknesses? What really went into winning that show? Maybe it meant something differently than what everyone thought.”