Harry Styles Helps Couple Get Engaged While Performing in Portugal 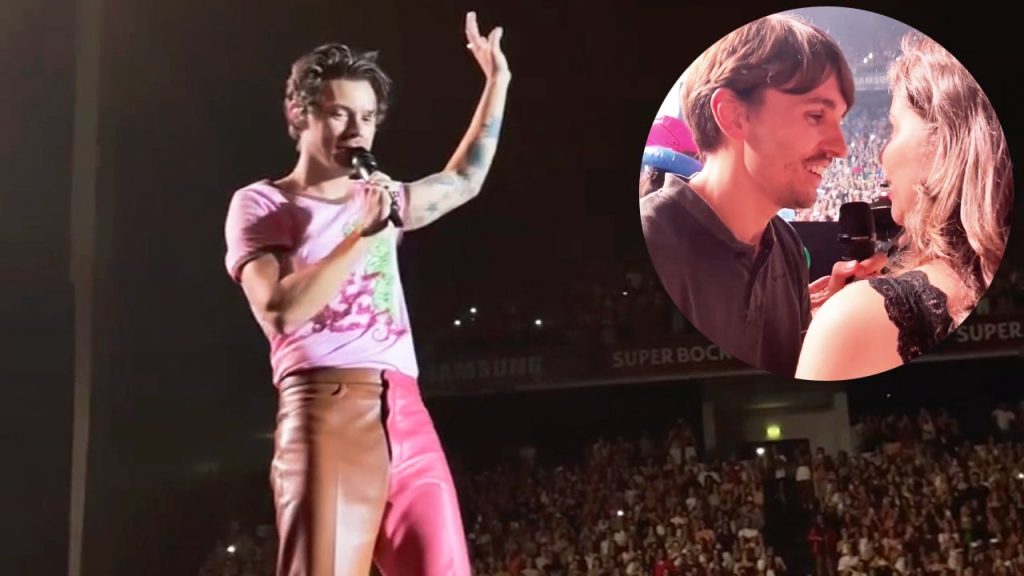 Leslie Grace Talks ‘Batgirl’ and the Surprising Way She Learned …

New ‘Lord of the Rings: The Rings of Power’ Featurette Promises …

Pat Carroll, Voice of Ursula in ‘The Little Mermaid,’ Dead at 95

Ne-Yo On Nearly Getting Divorced, How He Saved His Marriage, And…

Harry Styles‘ Love on Tour concerts are living up to their name! During a recent show in Lisbon, Portugal, the “Watermelon Sugar” singer helped a concertgoer pull off an epic proposal.

In the clip, Styles stands onstage and spots the couple before handing the man the microphone. As soon as the fan grabs the mic, he begins to serenade his girlfriend with Elvis Presley’s “Can’t Help Falling in Love” with the help of the crowd.

Things get even sweeter as his girl grabs the mic and begins to sing along with her date. When the camera pans back to Styles, he’s watching from the stage.

Just when the audience didn’t think things could get any sweeter, the guy gets on one knee, pulls the ring out of a wallet and asks the girl, over the mic, “Will you marry me?”

“Yes,” the new fianc?e screams into the mic, as the crowd cheers and they share a kiss.

The couple then get a special blessing from Styles, who tells them “Congratulations” before starting the show again.

Styles is known for stopping his shows for many reasons. During this run of the Love on Tour concerts, the “Treat People With Kindness” singer has given advice to a concertgoer who just ended a relationship, assisted with another proposal, and helped an audience member come out in honor of Pride Month.

In June, the “As It Was” singer paused his concert when he spotted his former teacher in the crowd during his show in Manchester.