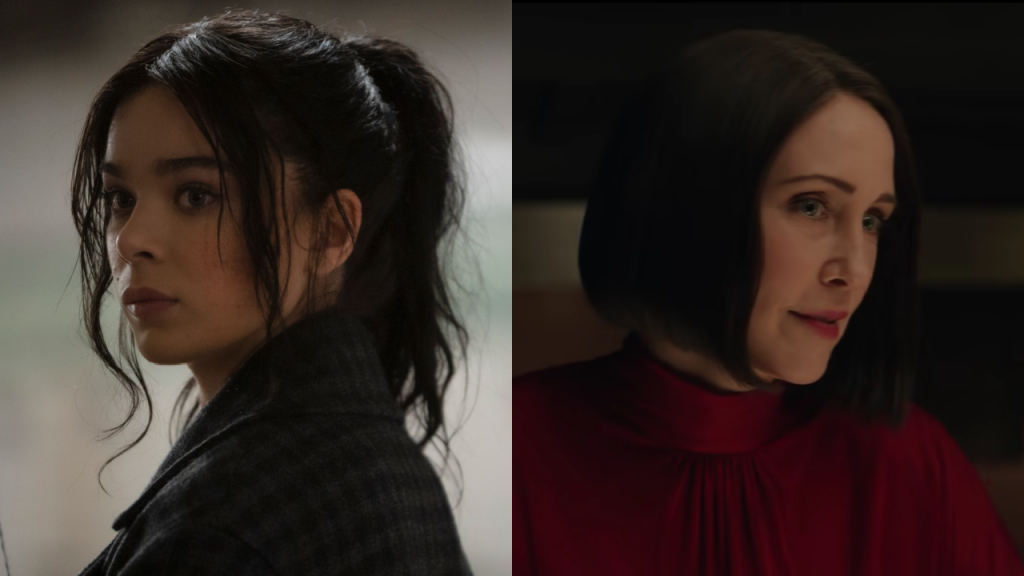 Mother-daughter relationships can be tense — and it only gets more complicated when one is keeping a superhero-sized secret!

Marvel’sHawkeye debuts on Disney+ on Wednesday, launching viewers into the world of Kate Bishop, aka Hawkeye herself, played by Hailee Steinfeld. MCU fans know, of course, that Kate isn’t the first Hawkeye. That’s Clint Barton, played by Jeremy Renner, who ends up reluctantly taking Kate under his wing after the pair find themselves in the midst of a dangerous criminal plot — and just in time for Christmas!

However, fans of the Marvel Comics — specifically, Matt Fraction and Kelly Thompson’s runs with the Hawkeye characters over the last decade — know that there’s another relationship that’s also very central to Kate’s life and her evolution as a hero: the one she has with her mother, Eleanor Bishop, played in the Hawkeye series by Vera Farmiga.

“There’s a lot of history between these two characters that we don’t necessarily see, but when we pick up with them, we understand that Kate is very much in a place in her life where she’s coming into her own and she’s figuring out who she wants to be on her own,” Steinfeld shared with ET ahead of the series’ premiere. “Her mom sort of sees in her this ambition, but this recklessness that she wants her to sort of channel in a responsible way, and in a way where she can succeed or set herself up to succeed. And I think they just have very different ideas of success and what that looks like.”

In Hawkeye, Eleanor is the head of Bishop Security, an upper-class New Yorker who perfectly embodies the wealthy, WASP-y detachment of a mother whose perfect parenting plan involves her daughter following in her Louboutin-clad footsteps in every possible way.

“It’s such a delicate, intricate relationship that we have with our mothers,” Farmiga noted. “They’re very much defining… We discover who we want to be, who we don’t want to be, by virtue of that very crucial relationship.”

“These are two women that are very, very similar — both very confident, both feisty, both opinionated,” she added of Eleanor and Kate. “And so, there’s this amazing push and pull, but always, always stemming from love and that umbilical cord that just binds them so tight together.”

While Kate’s secret identity leads her to shooting arrows and fighting crime in the New York City underworld, Farmiga noted that she thinks Eleanor “does see herself as a kind of superhero” as well.

“She is in the business of… keeping people secure and has a daughter who has a lot of prowess, but also a lot of recklessness,” she noted. “All mothers try to help their daughters channel power into something more effective, you know? Bridling that beautiful energy is a mother’s task.”

As fans of the comics may know, there are some interesting (read: possibly villainous) directions that the series’ writers and creators could take with the character of Eleanor Bishop, though we’ll have to wait and see which, if any, storylines they took inspiration from. For her part, Farmiga made a point of mentioning that she has extensive on-screen archery experience, telling ET with a laugh, “Mama Hawkeye is also very capable.”

However, during the Hawkeye press conference, she played coy about any possible twists and turns. “Does it get dark, a little bit?” she teased. “We’ll see. We’ll see.”

“It’s a story about family connecting and feeling the closeness, or the disconnect, as the case may be,” Farmiga also noted in her ET interview. And as for setting the show at Christmas time, she added cryptically, “The holidays always make everything just cozier, more emotional… and always more complicated.”

No matter where their on-screen relationship may end up, the actresses had nothing but raves when it came to working together on the exciting new series.

“It’s a joy to work all those kinks out with Hailee,” Farmiga marveled. “She’s an incredible actress. She’s so fun-loving, she’s lightness, and she’s just sweetness on two feet. I loved doing the mother-daughter thing with her.”

“I can’t say enough great things about Vera and working with her,” Steinfeld agreed. “She was absolutely incredible and handled this relationship so delicately.”

And both were more than thrilled to be stepping into their corner of the MCU and bringing to life some beloved characters and storylines.

“I feel so lucky to be playing a character that is so loved by so many, and that people have been waiting for some time to see brought to life,” Steinfeld noted. “I really do feel like this playing [Kate] sort of forced me to find a confidence and a determination and a discipline that’s always been inside of me, but I really had to bring it out of myself for this, and do this character justice.”