How to Watch LGBTQ-Themed Holiday Movies and Series on Hallmark, Hulu and More 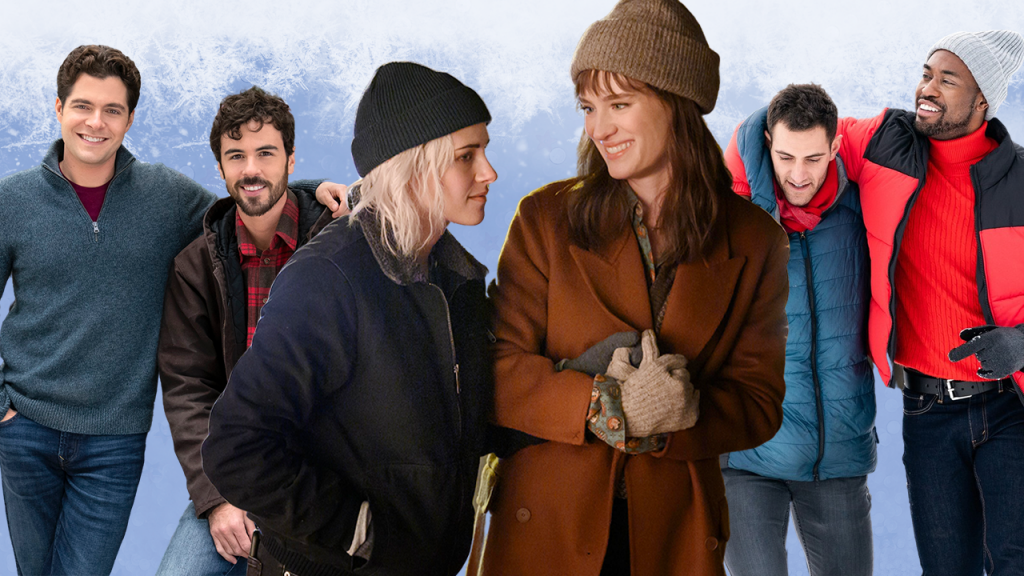 After finally getting its chance to shine last holiday season, there is now no shortage of LGBTQ-inclusive films and series now streaming or coming out between October and December. Whether it’s Happiest Season on Hulu or new romantic comedies from the likes of Hallmark Channel and Netflix, there are plenty of options to make the yuletide gay.

In 2020, both the Hallmark Channel and Lifetime announced their first-ever gay-led, Holiday-themed rom-coms, The Christmas House and The Christmas Setup, joining an increasingly diverse mix of original movies produced each year. In addition to those channels, streaming platforms like HBO Max, Hulu and Netflix are also embracing the holidays with a dash of queer content, from a holiday makeover series in the spirit of Queer Eye to a reality dating competition that sees one of the men hoping to fill his sleigh with love before Christmas Day.

In 2021, Netflix is debuting Single All the Way, starring Michael Urie and Jennifer Coolidge, while Bobby Berk and Matt Lucas are hosting holiday editions of reality competition favorites, Blown Away and Great British Baking Show. Additionally, Jonathan Bennett returns with The Christmas House 2 and Lifetime is premiering its first-ever lesbian-focused holiday movie, Under the Christmas Tree.

Although the stars of The Christmas Setup, married actors Ben Lewis and Blake Lee, admitted to being nervous about translating their real-life relationship into a romance onscreen, they were pleased with not only the experience of playing Lifetime’s first gay couple but also seeing so much queer representation behind the scenes as well.

The same goes for Happiest Season director Clea DuVall, who grew up as a gay kid never seeing herself represented in holiday movies. “I kind of thought to myself, ‘Why don’t I just make one of those movies then?'” DuVall said, adding, “This is such a personal story and I really wanted people to understand what it meant and the significance of it.”

And while these films do not necessarily represent the whole LGBTQ community, both Lewis and Lee hope these movies open the door for more holiday-themed projects starring transgender people and queer people of color. “Everyone deserves representation. Christmas is for everyone,” Lewis said, with Lee adding, “Love is love.”

With that said, check out the LGBTQ-themed holiday movies and series coming up or currently streaming online.

Starring: Bobby Berk and Katherine Gray
Plot: Blown Away is cranking up the heat for a spectacular holiday showdown! ‘Tis the season for redemption as five fan favorites return to the hot shop to compete in a series of Christmas-themed challenges in the quest to become The Best in Holiday Blow. In the spirit of giving, the winner will not only receive a $10,000 cash prize, but an additional $10,000 will also be donated to their charity of choice.

Starring: Robert Buckley, Jonathan Bennett, Ana Ayora, Treat Williams, Sharon Lawrence and Brad Harder
Plot: Working through some difficult decisions, Mitchell family matriarch Phylis (Lawrence) and patriarch Bill (Williams), have summoned their two grown sons — TV star Mike Mitchell (Buckley) and Brandon Mitchell (Bennett) — home for the holidays. It is their hope that bringing the family together to recreate the Christmas house, will help them find resolution and make a memorable holiday for the entire family and community. As Brandon and his husband, Jake (Harder), make the trip home, they are anxiously awaiting a call about the adoption of their first child. Meanwhile, Mike reconnects with Andi (Ayora), his high school sweetheart.

Starring: Ben Lewis, Blake Lee, Fran Drescher, Ellen Wong and Chad Connell
Plot: New York lawyer Hugo (Lewis) heads to Milwaukee with his best friend, Madelyn (Wong), to spend the holidays with his brother, Aiden (Connell), and his mom, Kate (Drescher), who is also in charge of the local Christmas celebrations. Ever the matchmaker, Kate arranges for Hugo to run into Patrick (Lee), Hugo’s high school friend and secret crush, who has recently returned after a successful stint in Silicon Valley. As they enjoy the local holiday festivities together, Hugo and Patrick’s attraction to each other is undeniable and it looks as though Kate’s Santa-style matchmaking is a success. But as Hugo receives word of a big promotion requiring a move to London, he must decide what is most important to him.

Starring: Austin Abrams, Midori Francis, Dante Brown, Troy Iwata, Keana Marie, James Saito, Jodi Long, Glenn McCuen, Michael Park, Gideon Emery, Jennifer Ikeda, Diego Guevara
Plot: A whirlwind holiday romance builds as cynical Dash (Abrams) and optimistic Lily (Francis) trade dares, dreams, and desires in the notebook they pass back and forth at locations all across New York City, finding they have more in common with each other than they would have expected. The series is based on the young adult book series Dash & Lily’s Book of Dares from the New York Times best-selling authors Rachel Cohn and David Levithan.

Starring: Kristen Stewart, Mackenzie Davis, Alison Brie, Aubrey Plaza, Daniel Levy, Mary Holland, Burl Moseley, Victor Garber and Mary Steenburgen
Plot: Meeting your girlfriend’s family for the first time can be tough. Planning to propose at her family’s annual Christmas dinner — until you realize that they don’t even know she’s gay — is even harder. When Abby (Stewart) learns that Harper (Davis) has kept their relationship a secret from her family, she begins to question the girlfriend she thought she knew.

Starring: Benjamin Bradley aka Mr. Christmas
Plot: A veteran in the interior design industry with a healthy obsession with the holiday season, Bradley takes you behind the scenes as he puts his design expertise and vast Christmas collection to good use. Equipped with lights, garlands, and enough tinsel to blanket the North Pole, he and his team of elves work around the clock to bring holiday cheer to families and communities deserving of a home makeover for the most joyous time of year. Mr. Christmas invites viewers along for the ride to kick off the holiday season and get inspired to take their own home decorating and traditions to the next level.

Starring: Jinkx Monsoon and BenDeLaCreme
Plot: Drag Queens, sentient eggnog, song and dance, a naked man. Hold on to your sugarplums and get ready for a holiday drag spectacular that’s as magical as a flying reindeer and as unexpected as a virgin birth!

Starring: David Bromstad
Plot: The host of HGTV’s My Lottery Dream Home has a lot to celebrate this holiday season. He just moved into his new Orlando, Florida, home and has recruited serious reinforcements to help him pull off an over-the-top winter celebration. Decorating together for the first time, David and his sisters, Dyonne and Dynelle, will draw inspiration from their Scandinavian heritage to transform the home with an astonishing 70 decorated indoor trees, dozens of cheerful gnomes and rustic faux wood beams. They even repurpose gift bags and boxes to create a do-it-yourself advent calendar on the staircase. Once every whimsical detail is in place, David will go all out to host a very merry party for family and friends.

Single All the Way (Netflix)

Starring: Michael Urie, Philemon Chambers, Luke Macfarlane, Barry Bostwick, Jennifer Robertson with Jennifer Coolidge and Kathy Najimy
Plot: Desperate to avoid his family’s judgment about his perpetual single status, Peter (Urie) convinces his best friend, Nick (Chambers), to join him for the holidays and pretend that they’re now in a relationship. But when Peter’s mother (Najimy) sets him up on a blind date with her handsome trainer, James (Macfarlane), the plan goes awry.

Starring: Tamera Mowry-Housley, Martha Stewart and Chris Hessney
Plot: In a special holiday-focused episode of Table Wars, a new extreme tabletop and special theme event competition on Discovery+, each contestant will create an over-the-top “winter wonderland”-themed table and dining environment in just eight hours. Host Tamera Mowry-Housley, alongside fellow judges Martha Stewart and Chris Hessney, will evaluate the stunning work, which will include a creative multi-level Antarctica-inspired glacier, a breathtaking Christmas tree suspended from the ceiling, and a winter engagement in Paris. When the challenge is over, one contestant will be eliminated from the competition, leaving the others in the running to win the Table Wars title and a $50,000 cash prize.

Under the Christmas Tree (Lifetime)

Starring: Elise Bauman, Tattiawna Jones and Ricki Lake
Plot: Marketing whiz Alma Beltran (Bauman) and Christmas tree whisperer Charlie Freemont (Jones) cross paths when Charlie finds the perfect tree for the Maine Governor’s Holiday Celebration — right in Alma’s backyard. While they initially spar, romantic sparks soon begin to fly between the two women as the enchanting tree and some Christmas fairy dust from the town’s patissiere extraordinaire (Lake) bring out the best in them and spark each other to take leaps of faith and fight for love and Christmas magic.

Starring: Emeraude Toubia, Mark Indelicato, Desmond Chiam, Rome Flynn, Vincent Rodriguez III, Isis King, Todd Grinnell, Constance Marie, Benito Martinez
Plot: With Love is a romantic comedy following the Diaz siblings, Lily and Jorge Jr., who are both on a mission to find love and purpose. Each of the five episodes, set during a different holiday throughout the year, follows Lily on her transition from being newly single to caught in a love triangle with two sexy suitors and Jorge Jr. as he introduces his new boyfriend Henry to the family for the first time on Christmas Eve/Nochebuena, and the Diaz’s cousin, Sol Perez, as they balance a potential blossoming relationship with their coworker Dr. Miles Murphy. The patriarchs of the family, Beatriz and Jorge Sr., as they also deal with their own relationship challenges and finding new ways to keep the spark alive in their 50’s. The Diaz family takes a wild ride through all the highs and lows of life, during some of the most heightened holidays of the year.

Starring: Natasha Rothwell (who narrates)
Plot: Season 1 of the reality competition follows three hopelessly romantic singles — Faith, Chad and Garrett — on their journey to meet that special someone to bring home for the holidays. The romance begins at a fairy-tale castle in Austria where 10 magical wintery dates await — from ugly sweater parties and an intriguing masquerade ball to apres-ski activities, these dates are sure to send temperatures soaring. As in all great rom-coms, our romantic leads’ paths to love won’t be easy. Just as they make connections, new love interests arrive, adding plenty of twists, turns — and hopefully — holiday cheer. Along the way, they’ll face regular elimination ceremonies, complicated blasts from the past and no shortage of conflicting emotions. After bringing someone home for the holidays, they must decide whether to commit or walk away forever by the stroke of midnight on New Year’s Eve.

If you love holiday movies, check out our list of the 2021 holiday movies worth watching on Hallmark, Netflix, Lifetime and more.