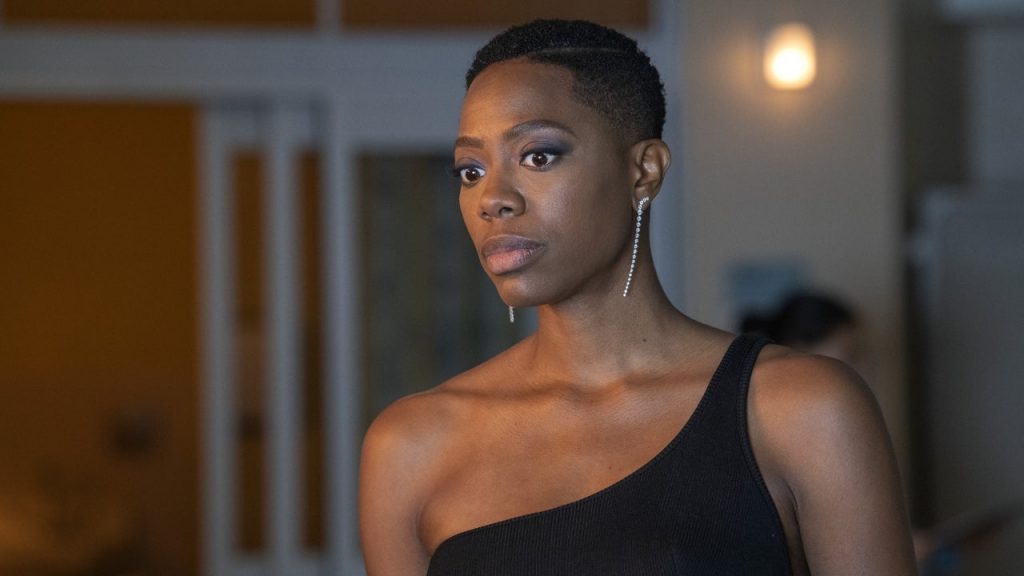 Molly is in a whole new headspace.

This week’s Insecure episode, “Surviving, Okay?!”, begins with Molly getting news that her mother, CeeCee (L. Scott Caldwell) is in the hospital after suffering a stroke. As Yvonne Orji tells ET, this situation puts her character in a moment of reflection, regret and thinking about her future.

“I think it’s that feeling of regret. It’s, am I where I want to be? And if anything happens to my parents, can they really be proud of me? Did I waste time? I haven’t done enough,” Orji explains of Molly’s initial reaction to seeing her mother in the hospital. “I can’t imagine or fathom not having a parent with me in pivotal moments of my life.”

Still in her black cut-out dress from the night before after a night with a guy, Molly rushes to be by her family’s side. Once she enters the hospital room, there’s an immediate shift as she sees her vulnerable mother. However, the composed and got-it-together Molly returns as she tells the nurse that she’d like to be the primary contact since it might be too much for her father and she can “deal with it.”

The Molly-centered episode brings many moments of realization, contemplation and perspective. Orji dives into the episode with ET, sharing if Molly will ever give up control, what will make her happy, and how things will change for her from here to the finale.

ET: Describe how Molly was feeling when she’s seeing her mom in the hospital?

Yvonne Orji: Going into season 5, this was a growth season for all of us…[When she sees her mom], she thinks, “Why have I not achieved these pivotal things?” And it’s the regret. It’s the “What could I have done”‘ But so many things are out of your control because you can’t force life to happen. And I think that’s where we find her, just kind of like, “Oh my god, I really need to get my life together.” My dad used to say, time waits for nobody. We know that. And I think Molly has realized, my time is kind of slipping, time is going. I got to get me together.

Yeah, but why is Molly so hard on herself too?

She’s a warrior. She’s very heavy. She’s a woman that likes to be in control and hasn’t had anyone to help her learn to relinquish it, right? Her brothers are kind of who they are. Her parents are who they are. She is kind of like, in the Black community, you have people who are the ones who are breaking generational curses and the burden of a lot of that is put on maybe one or two siblings. So she feels obligated to be at a certain place, to do a certain thing, to live a certain way, to have certain things in order to make not only herself comfortable but also her parents comfortable. And then she thinks, “Is there anything else I could have done?” When the reality is you she probably could have had more grace in herself because the answer is no.

Do you think she will ever give up that control?

I think she’ll learn. It’s not about giving up control, but it’s about prioritizing. I think she’ll learn to prioritize what’s actually really important, which I think is a really good indicator, really for her, to understand, OK, I can want what I want in these circumstances but at the end of the day, this is what matters.

I think it’s a little bit of both. She definitely wants companionship. I think we’re built for companionship. Even the people who are like, “I love being single,” yeah, but there’s still a need for people to connect with, community to engage with. And I think Molly wants love, Molly wants to have kids. She wants what she saw her parents have when she found out that her dad cheated. And even then, through the last year, she’s learned to forgive. She’s like, I thought relationships were strong only if they they looked like this. But now I’m seeing that my parents’ relationship was strong even when there was a rock and I didn’t know that that was a thing that could happen. So I think she walked away.

There’s a scene where she gets a call from work, and she says that she has personal issues but doesn’t really reveal that her mom’s in the hospital. Why doesn’t she just share that with her boss?

I think there’s certain things she wants to hold close to her chest. She wants to prove to herself that she can keep things together. When you’re a Black woman who is a boss, it’s OK, I don’t need help. I got it, I got it, and your power comes from that need to never let anyone see you sweat, never drop any balls, never ask for help. And that’s not willpower. That’s actually weakness, to not allow people in to help you. Molly is like, I don’t want an asterisk. I don’t want them to think I can’t do it. I also need to keep up appearance, I need to be strong. But she’s also, I want to be work because I want to take my mind off of whatever the heck is going on.

Will this situation affect her work?

Yeah, as it should, I mean, any time you’re dealing with anything troubling it affects your mood, affects your work, no matter what kind of a front you put up. It subconsciously affects you.

This episode was directed by Kerry Washington, who previously directed last season. How was it working again with Kerry and reconnecting?

She’s great. She’s one of my favorite directors or people to be directed by because she’s an actor’s director. Her, Regina King, Debbie Allen, those directors that have also been performers. They allow you space to be the performer, but then they guide you in a way that it brings out something new in your performance. And that was really beautiful. Just her guiding me to be in the moment. There’s levity that needs to happen in the episode, when Molly shows up and she’s wearing last night’s outfit and others are looking at her. She’s an amazing dramatic actress, but she’s also very funny. But being able to give me pointers on how to balance when both [comedy and seriousness] are needed in one scene or from one scene to the next.

This episode deals with a parent’s health care and we’ve seen Molly tell her parents they need to plan their estate. What is something you’d like people to take away from this episode?

The show doesn’t shy away from exploring difficult topics. As we get older, the reality of mortality hits us. Especially in the pandemic, we’ve seen a lot of loss. This season touching on that idea that, whether it happens or not, it really brings home this notion of, “Man, the people that we thought were superheroes growing up, that if the unimaginable happens, who did we become? How do we go on and how does it change us?” And I think that’s really what that moment is for Molly. It hits her, like, “Oh my gosh.” I know it’s going to happen in life because the only thing that’s certain in life is you’re no longer living. But I never imagined that could happen or that we’d even get close to happening now. I’m still young. I don’t have things accomplished. I think that’s what that episode is going on. We are at that age, as you grow up, even if you’re 50, you will have to [be there for] a parent and even that feels like it’s too soon. And these kids in their thirties, dealing with being at a hospital for a parent. The immediacy and the realness of mortality is so prevalent and so piercing, and especially at a time like after a pandemic where so many people have dealt with loss. I think it’s even more poignant of a storyline to touch upon. And I am so grateful and proud of the writers to not be afraid to tackle that, and being able to be the character that had to experience that and how that changes you. I hope that the viewers are able to either find some kind of peace for anyone who has lost someone, or the community to know that you’re not alone.

What can you tease about what’s coming up for Molly in the next episodes?

I think it’s a journey. I think we’re going to see Molly adjust and adapt to expectations that she puts on herself, that other people put on her. I think that’s going to be really interesting, to see what she does with what life experiences have come her way.

Reflecting on your journey as Molly, what do you think has been the biggest lesson that she’s learned?

New episodes of Insecure air Sundays at 7 p.m. on HBO.