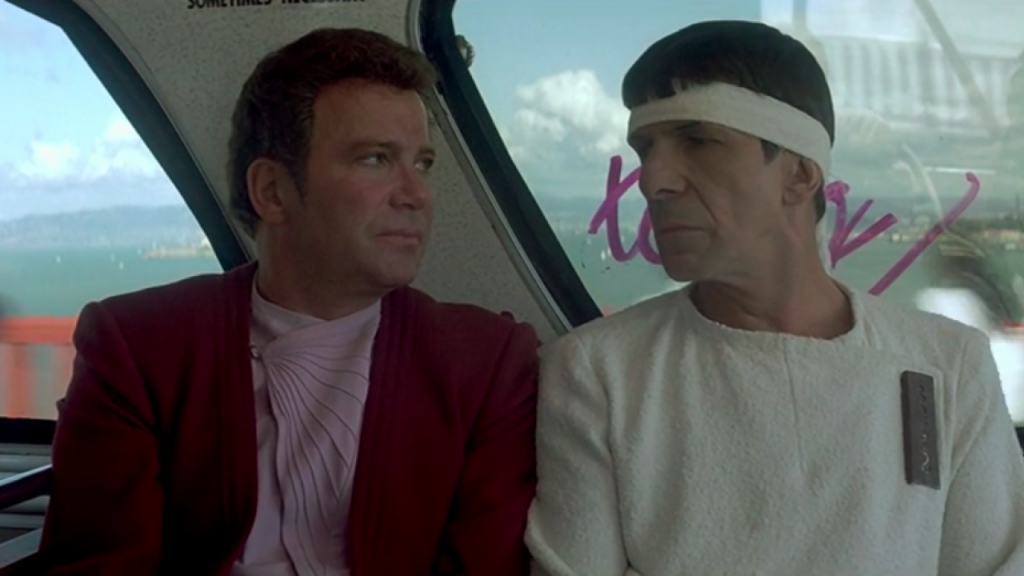 If Star Trek IV: The Voyage Home has a Friends episode-style nickname, it’s “The One With the Whales.” But it speaks to the power of the movie’s comedic moments that among Trekkies it’s also referred to as “The One That’s Funny” 35 years after its debut.

Speaking with ET upon The Voyage Home‘s premiere in 1986, the late Leonard Nimoy, who died in 2015 at age 86, revealed the humor wasn’t happenstance. In fact, for his second outing as director and actor following Star Trek III: The Search for Spock, it was a mandate.

“I said I want to have some fun here,” Nimoy explained. “We said intentionally right from the very beginning. We want this lighter in tone than these previous films.” Noting the amount of deaths that transpired in I-III, including Mr. Spock, Nimoy quipped, “[The characters] were having eulogies all the time.”

One step of Nimoy’s initiative was a memorable incident as Spock and Captain Kirk (William Shatner) traversed San Francisco circa 1986, or “the Dark Ages” according to Bones (DeForest Kelley). While riding the city bus, they’re disturbed by a quintessential ’80s punk blasting loud music from a boombox. At first, Kirk applies his 23rd century manners and politely requests he lower the volume. But the “Punk on Bus” — the character’s official name in the credits — replies by flipping him the bird and raising the audio even higher. That’s when Spock resorts to his people’s go-to defense: the “Vulcan nerve pinch,” which renders the unruly passenger unconscious and cuts off the music after he collapses onto his boombox.

As Nimoy told ET, the comic moment was the filmmaker living out a personal fantasy following a similar interaction in his real life that later inspired the scene. “I was walking on Columbus Avenue in New York one day and suddenly was hit with a wall of noisy music,” he recalled, explaining that he then discovered the source was a man who just walked past him carrying a “gigantic” boombox. “I thought if I was Spock right now, I’d ‘pinch’ his brains out and that’s how that got into the movie. It really happened.” He added, “I got hit with that noise and I thought, ‘I’ve gotta make a comment on that.'”

On top of the real-life inspiration, Nimoy employed his real-life assistant at the time, Kirk Thatcher, to play “Punk on Bus” (he was also an associate producer for the movie, in addition to co-writing the song playing on the boombox). Thatcher went on to be a prolific writer and director for multiple projects at The Jim Henson Company, including this year’s Muppet Haunted Mansion on Disney+. But ultimately, it would be the notoriety from his less than a minute of screen time that led to a serendipitous invitation to join the Marvel Cinematic Universe, albeit briefly.

As Thatcher later discovered, MCU overseer Kevin Feige is a big fan of The Voyage Home and, in particular, Spock and Kirk’s bus scene. And sometimes that’s all it takes to end up in a Marvel film, such as 2017’s Spider-Man: Homecoming. As Thatcher explained to StarTrek.com at the time, not only did he film a cameo in the movie, it’s comically — and very non-canonically — implied that he reprised his role as “Punk on Bus” for a quick moment early in the film (as seen below).

Thatcher explained to the outlet: “I was having a meeting with the guys at Marvel and Kevin Feige had to leave early to catch a plane to New York for the last few days of shooting and wrap on Homecoming. I mentioned that I was going to New York too, only two days later. He got excited and asked if I would be interested in doing a cameo as a punk in Spider-Man? I, of course said, ‘Sure!'” While the moment had been 30 years in the making, Thatcher noted that “about 48 hours” passed between his initial invitation and breaking out the boombox again on the set of a big-budget Marvel film.

Spock becoming a public transit hero also derived from Nimoy’s wish to get Star Trek “off the lot,” which for this franchise mostly pertains to the Paramount Studios backlot in Hollywood, where a majority of the original series and the first three movies were filmed. His objective culminated with him and veteran Star Trek writer Harve Bennett crafting a plot that in part weaved together a lethal threat to Earth, time travel, nods to global warming and the Vulcan’s recovery after being resurrected from the dead in The Search for Spock.

But the production ultimately did circle back to Melrose Avenue to film The Voyage Home‘s climatic finale at Paramount, which saw the crew crash their borrowed Klingon Bird-of-Prey into the San Francisco Bay. Still, shooting that sequence in a water tank adjacent to the parking lot was a little more exciting than their run-of-the-mill soundstage production sets. “It was a lot of fun to shoot that scene,” Nimoy said, which he also jokingly referred to as his “Cecil B. DeMille moment” on account of the wind, wave and smoke machines around the set that were reminiscent of productions in Hollywood’s “Golden Age.”

Despite the excitement, Nimoy said he faced extra challenges while pulling double duty on set. “I had to be taken back and forth in a boat in order to get into the shot, and then [another boat ride] to get back out of the shot and look behind the cameras,” he remembered.

Nimoy’s initial instincts paid off when The Voyage Home was released on Nov. 26, 1986. The movie brought in $130 million at the worldwide box office and garnered several favorable reviews. It also won over a very important figure in the Trekkie community. “I have seen the rough cut of [the movie] and I was very, very pleased,” Star Trek creator Gene Roddenberry told ET leading up to the release. “I think it’s the best of all the Star Trek movies. Leonard Nimoy has done a fine job.”

Looking at the canon in the 35 years since, it’s easy to see the movie’s influence on both the franchise’s TV shows and films. Time travel has proven to be one of Star Trek‘s most fertile storytelling devices, which The Next Generation took advantage of nearly 10 years later to the day. And its influence on the comedy end has reverberated all the way to Lower Decks, which referenced The Voyage Home‘s pair of whales as one of many Easter eggs on Mariner’s conspiracy tac board in “Cupid’s Errant Arrow” (seen below).

Looking past the movie’s humor and dynamic set pieces, Nimoy believed the magic behind The Voyage Home could be attributed to his long-time collaborators. “I think every one of them makes an extremely valuable contribution to Star Trek,” Nimoy expressed. “One of the most important things is this particular group of people and the special chemistry that happens when we all come together.”

Star Trek IV: The Voyage Home is streaming on Paramount+.

PrevPreviousMadonna hits out at Instagram for removing photos
NextBest TV and Movies to Stream: ’12 Dates of Christmas’, ‘The Beatles: Get Back’ and MoreNext