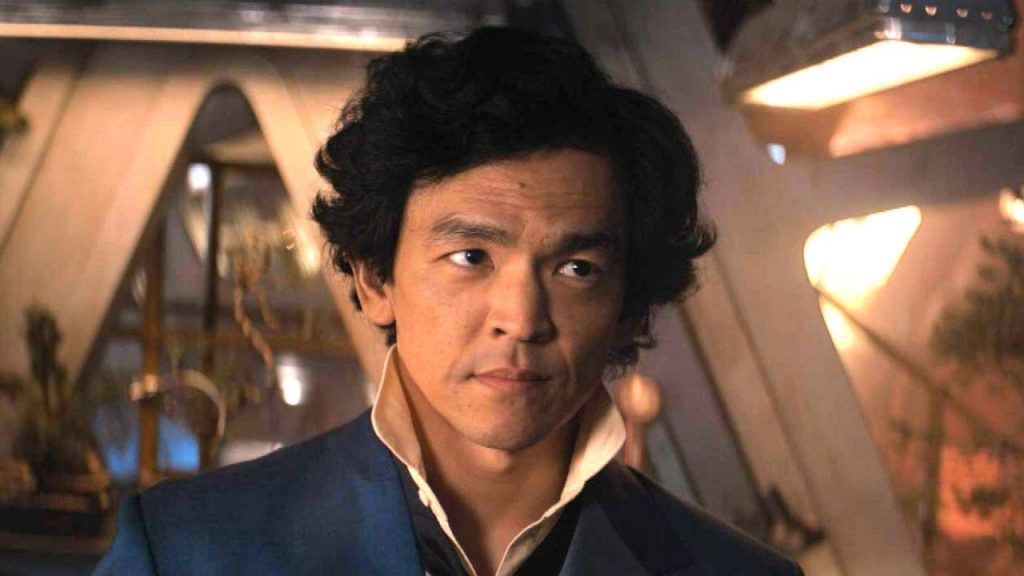 John Cho is ready to jam. The actor straps on his cowboy boots for Cowboy Bebop, premiering Friday on Netflix, and only ET has an exclusive sneak peek from the anticipated series.

Based on the popular anime, the space Western follows three bounty hunters, aka “cowboys,” all trying to outrun the past. As different as they are deadly, Spike Spiegel (Cho), Jet Black (Mustafa Shakir) and Faye Valentine (Daniella Pineda) form a scrappy, snarky crew ready to hunt down the solar system’s most dangerous criminals — for the right price. But they can only kick and quip their way out of so many scuffles before their pasts finally catch up with them.

In the first look from the premiere episode, Spike and Jet have a tete-a-tete on the ship about the new bounty that they’re about to chase. But Spike, of course, isn’t completely sold on Jet’s pitch to chase after he takes one swift look at the baddie his partner thinks is worth going after — you know, so Spike can enjoy that lobster dinner.

When Jet reveals that Asimov, the bad guy in question, was last spotted in New Tijuana, Spike immediately kills the idea of even stepping foot back in that territory. Bad memories and all. “You know what I got the last time I was on TJ?” an annoyed Spike asks Jet, who jokes, “Herpes?”

“Stabbed. You know what I was doing? Buying a churro. There’s gotta be something better, Jet. C’mon,” he implores.

“My daughter’s turning eight and I can’t afford to buy her a present because of you. I can’t afford a goddamn walking Sally doll, which is apparently all the goddamn rage in little girls’ toys, because of you,” Jet fires back. “Now this is my ship and as long as you’re on it, we’re going to go after the bounties I say we go after.”

After pausing a beat, Spike — unamused at their little argument — finally asks, “Do you feel better?”

How does Jet respond? Watch the exclusive clip from Cowboy Bebop, exclusively at ET above, to see what happens next.

Ahead of its premiere, the cast got together virtually to preview the series.

“I think all of us were excited just to go on the Bebop set and look around and kind of dig around,” Pineda told ET. “I was really hoping I was going to see a 90210 reference because I couldn’t believe that that was in the original anime. So I was waiting for Jason Priestley to jump out from around a corner, but there still is a season 2 [possibility]. So we’ll see.”