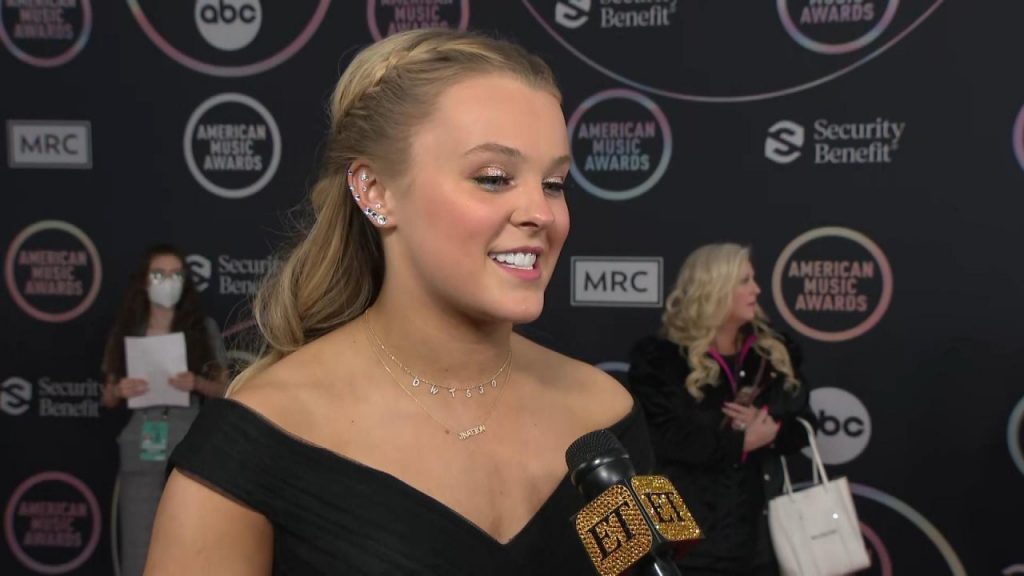 JoJo Siwa ditched her signature bow and rainbow aesthetic for a sleek, black gown that made the 18-year-old look more sophisticated than ever. ET spoke to Siwa at the 2021 American Music Awards Sunday night where she talked about her look and finding happiness in Dancing With the Stars, amid her split from Kylie Prew.

“I wanted to be sleek tonight, but I was like, I can’t fully ditch out on colors, I gotta have a little something, something,” Siwa said of the elegant back gown, which featured an off-the-shoulder neckline and ruffled skirt that featured sheer peekaboo details throughout.

Siwa is headed to the finals on DWTS, and while she wouldn’t say too much about her upcoming number, she called the dance that her and partner Jenna Johnson, have in store, “so magical.”

“I am so excited,” She gushed. “I’m really pumped up, we have a fusion number, a Tango and a Cha-Cha, which is so fun. And then for our freestyle, I honestly want it to be a surprise. Our song that we get to dance to, is probably the most meaningful song to me. And the dance that we do is so magical. I’m not gonna spoil [it], but the last 20 seconds are the 20 seconds in this season that I am most grateful for.”

The dancing competition series has been a real outlet for Siwa, who recently split with her girlfriend after less than a year of dating.

“There were days when the only thing that I wanted to do was go to rehearsals, dance with Jenna and take my mind off everything,” Siwa shared. “That is something that, going through a breakup and a heartbreak, I was so grateful that I had. Dancing With the Stars was my little happiness outlet over the last 10 weeks, so I’m really grateful for that.”

And while she’s so grateful to have made it to the finale, Siwa said she’s not ready for the experience to be over.