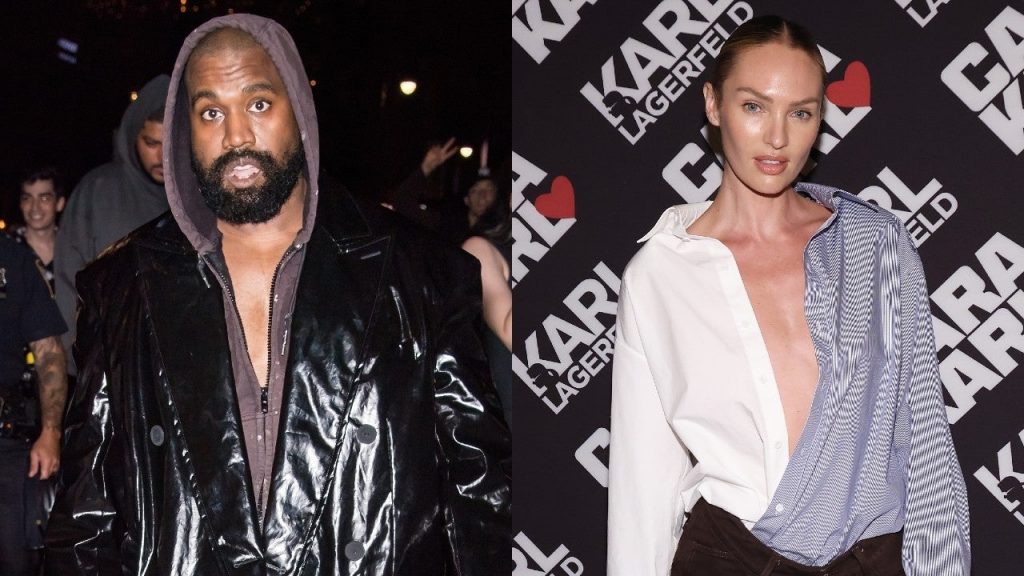 Kanye “Ye” West is spending time with another famous model. A source tells ET that the 45-year-old rapper is dating 33-year-old Candice Swanepoel.

“Kanye and Candice are dating and their relationship is new,” the source says. “They like each other and are happy with how things are going so far. They’ve connected over fashion and creativity. Kanye is excited about Candice.”

On Thursday, West reposted an Instagram Story with Swanepoel in which the two are seen together behind some blurred-out glass.

In the image, West is sporting a hoodie and a leather jacket, while Swanepoel is wearing hot pink pants and a black top with a silver jacket.

In addition to dating, these two are also working together. The model is featured in West’s new YZY SHDZ campaign. West posted a photo of the model with a bald head and wearing new silver YZY shades on his Instagram. He also shared an image of her going topless from the same shoot.

Vogue reports that the bald head on Swanepoel in the campaign is actually that of YZY collaborator Nick Knight.

“The vision for the shoot was so clear but also allowed for me to contribute my perspective on it,” Swanepoel tells Vogue of the campaign. “Moreover, it was exciting being a part of something I knew would instantly become iconic.”

Swanepoel also posed for Kim Kardashian’s SKIMS campaign alongside Tyra Banks, Heidi Klum, Alessandra Ambrosio, and Kardashian herself, which will be featured on the new season of the Hulu series, The Kardashians.

This isn’t the first model West has been seen out with since his split from Kardashian. In 2021, he was spotted out in France with Irina Shayk. He’s also dated model Chaney Jones and model-actress Julia Fox, who recently spoke out about the red flags in their relationship.

“The unresolved issues that he was dealing with,” Fox told ES Magazine. “It just seems like he had a lot to work on, and I just don’t have time for it, or energy. I don’t have the bandwidth or emotional capacity for it. I’m proud of myself for that.”

As for Swanepoel, she split from her longtime fianc? Hermann Nicoli in 2018.

West isn’t just making fashion headlines this week for hanging out with Swanepoel. He also announced that he was terminating his deal with GAP. During an interview on CNBC, he said the brand failed to meet obligations in the agreement, including product distribution and opening Yeezy GAP stores.

“It was very frustrating and disheartening, because I put everything I had, all of my top relationships [into this deal],” West told CNBC. “Sometimes I would talk to the guys, the head leaders, and it would be like I was on mute or something.”

Kim Kardashian Is a ‘Single Lady’ at Beyonc?’s Party, Kanye Not There

PrevPreviousDavid Beckham Waits Over 13 Hours in Line With Mourners, Sheds Tears While Viewing Queen Elizabeth’s Coffin
NextThe 10 Best Halloween Costumes for Dogs That Will Put a Spell on EveryoneNext