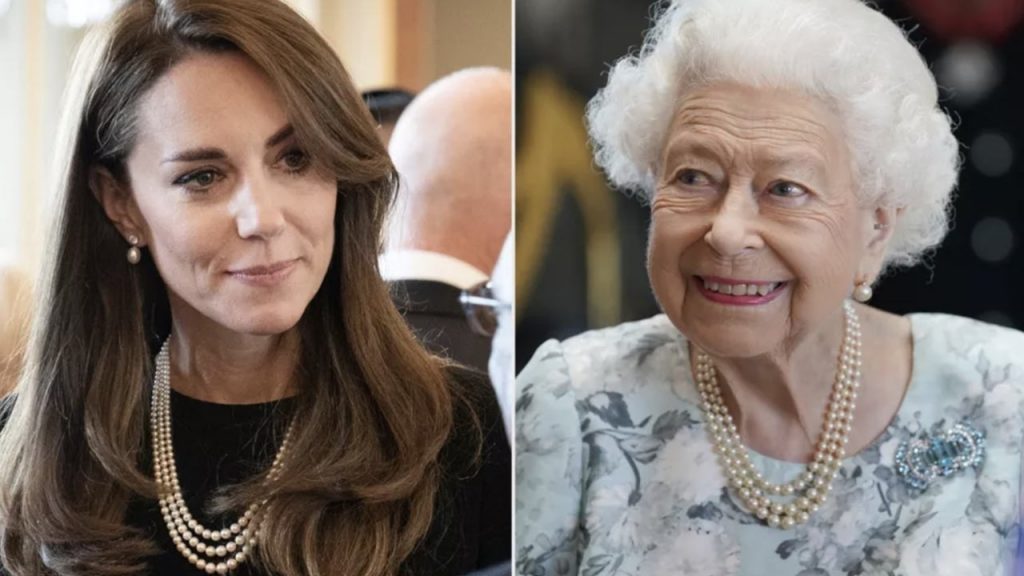 Kate Middleton brought a piece of Queen Elizabeth II with her when she attended a lunch reception Saturday afternoon at Buckingham Palace.

A royal source tells ET that the Princess of Wales wore Her Majesty’s pearl necklace and bracelet in a poignant tribute to the late queen. Kate paid homage to the queen by wearing her three-strand pearl necklace that she wore daily, as well as a pair of pearl and diamond earrings of the queen’s along with a pearl bracelet.

The lunch — also attended by King Charles III, Camilla, Queen Consort and Prince William — was held for governors-general of the Commonwealth nations, who arrived ahead of the queen’s State Funeral slated for Monday. President Joe Biden, France President Emmanuel Macron and Canada’s Prime Minister Justin Trudeau are all expected to attend.

Middleton’s no stranger to wearing jewelry with huge value, sentimental or otherwise. She once wore Queen Mother’s diamond and sapphire fringe earrings on Oct. 27, 2015 for a gala dinner at the Victoria and Albert Museum in London. Queen Mother, who died in March 2002, was photographed wearing them backstage at a Ben Travers play in 1986 in London.

Getty
Queen Elizabeth II wearing the pearl necklace on July 15, 2022 in Maidenhead, England.Getty
Queen Mother wearing her diamond and sapphire fringe earrings in 1987 and Kate wearing them in 2015.Getty

Royal expert Katie Nicholl told ET recently that, when it comes to Elizabeth’s private jewelry collection, there’s a pecking order in terms of how they’ll be divided, and the Queen Consort will likely have first dibs.

“There is a hierarchy in all of this,” Nicholl said. “The Queen Consort, really, gets first choice of the queen’s jewelry. And after that is Princess of Wales, of course, Kate [Middleton]. The Duchess of Sussex, I’m sure, will come in for some jewelry at some point, but she is much further down the pecking order.”

As far as what the late queen’s private jewelry collection is worth, it’s impossible to say.

“While we can put a value of billions onto the crown jewels, putting a value on the queen’s private collection is much harder, simply because we don’t know every piece in her collection,” Nicholl said. “And, also, how can you put a price on something that may have been given to her by a world leader or a king or queen or an emperor or an empress 40, 50 years ago? These pieces have so much significance, historical significance, that it’s very hard to put a price on them.”

“I’m sure there are jewelers that would be able to put the queen’s personal collection based on what we’ve seen, which are tiaras full of pearls and diamonds,” Nicholl continued, “but given that these have been handed down by queens before our late queen, it’s impossible to actually put a value on them. They are simply priceless.”

How the Royal Family Will Divide Queen Elizabeth’s Jewelry Collection