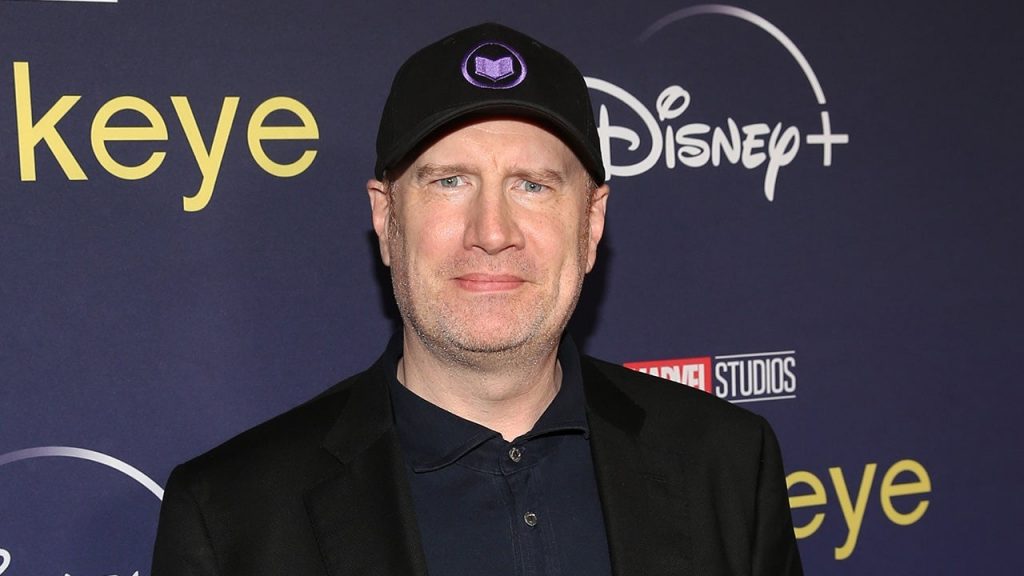 Ahead of Hawkeye‘s Thanksgiving premiere, Kevin Feige opened up to ET about setting the latest Marvel spinoff during Christmas and what’s in store for the future of the Marvel Cinematic Universe, especially as he rounds out one year of Disney+ series.

When it comes to setting Hawkeye during the holidays — as it follows former Avenger Clint Barton (Jeremy Renner), whose well-earned family time is interrupted when he’s forced to team up with aspiring 22-year-old superhero Kate Bishop (Hailee Steinfeld) to unravel a criminal conspiracy — Feige told ET during the series’ premiere event in Los Angeles, “We’ve always wanted to do this.”

While Iron Man 3 is set around Christmas, it came out during the summer and is not commonly “considered our Christmas movie” whereas “this unabashedly is a holiday story,” Feige said.

Earlier in the week, during a press conference with reporters, the Marvel boss explained that the setting was “also based on early discussions about setting a series in a limited time period. It’s not quite real-time, but it’s essentially a six-day period.” And so, the series becomes about whether Clint can make it home in time to see his wife, Laura (Linda Cardellini), and kids, for Christmas, “which was a fun breath of fresh air after world-ending stakes and Celestials bursting out of planets,” he continued.

When ET asked the cast about setting Hawkeye during the holidays, they all agreed it was the perfect time, especially for a series set in New York City. “There’s nothing like Christmas time in New York,” said Vera Farmiga, who plays Kate’s mother, Eleanor Bishop. “There’s nothing more decorative, more festive, more fun-loving… It’s a feeling that you don’t get anywhere else.”

Tony Dalton, who plays Jack Duquesne, added that this could easily join the Christmas canon and become “one of those shows that people are going to watch during the holidays. It’s like another character in the story… it makes it just that more interesting.”

Also reiterating Feige’s point about Hawkeye being “a family-based story,” Renner himself said that “it makes it much more family friendly because Clint is a big family guy… It’s a wonderful pin to put in this thing.”

Given the reaction to the series so far, it comes as no surprise that Feige is thinking about setting more of the MCU during the holidays. “I’ve always loved films or shows or specials that take place over the holiday season. I think there’s a heightened amount of emotion and heightened amount of conflict inherently that can occur,” he explained, adding that he’s “always been looking for opportunities” to tell more stories during this time.

Additionally, there’s the upcoming The Guardians of the Galaxy Holiday Special, written and directed by James Gunn and starring much of the film series’ core cast. Expected to debut on Disney+ in December 2022, the special “has literally been in the works for four years,” Feige noted. “Obviously, they’re very different but I just love this time of year for the storytelling possibilities.”

Beyond holiday-themed MCU stories, there’s plenty to look forward to, especially when it comes to the many series slated to premiere on Disney+ over the next couple of years. Among the confirmed animated and live-action titles is an Echo spinoff, which will follow Maya Lopez (Alaqua Cox), who is first being introduced onscreen on Hawkeye.

“We’ll see Maya Lopez go from the end of this series into that series,” Feige said, adding that Cox “is amazing. It will be fun to see the audience discover Maya over the course of the series.”

When reflecting on the first year of MCU series on Disney+, which has included WandaVision, The Falcon and the Winter Soldier, Loki and What If, Feige said that “the reception to each of them is what has been most gratifying because we always wanted them to be different.” And being on the streaming platform specifically has allowed them to “take that even further than we had dreamed,” noting that while each project is designed to fit together, “they’re also so different from one another. The MCU is sort of this all-encompassing genre.”

“The audience has responded the way we wanted to in that it doesn’t seem like there’s an overabundance of this,” Feige continued, adding that these projects would be nothing without the “amazing casts” they’ve been able to pull together over the years. “It means a lot when people sign up and it means a lot when it turns out really well.”

Hawkeye premieres with two episodes on Wednesday, Nov. 24 on Disney+.