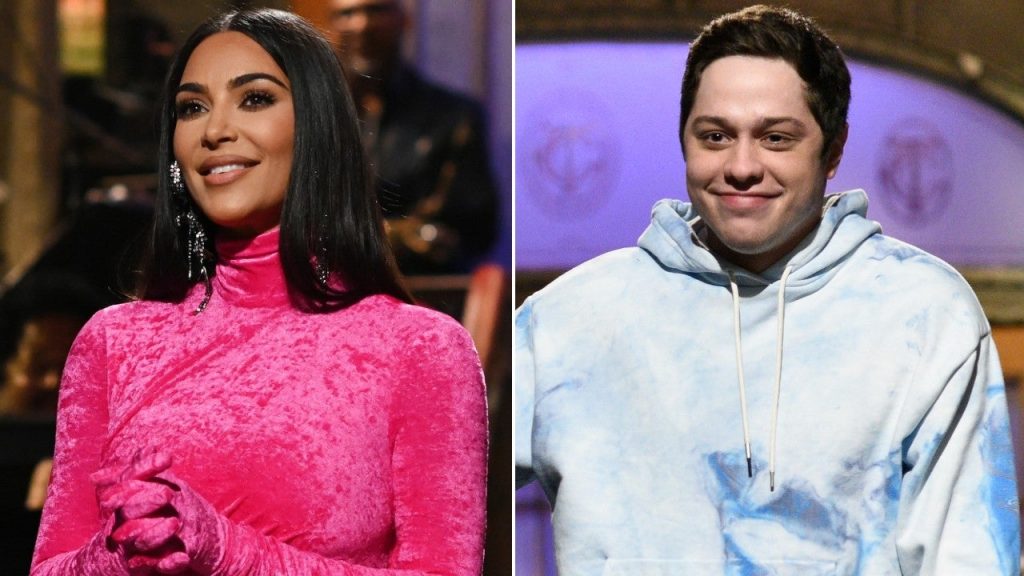 Kim Kardashian West and Pete Davidson are sharing a PDA moment! The 41-year-old reality star and 28-year-old comedian stepped out together after almost a month of romance rumors.

The pair were spotted holding hands while in Palm Springs, California, earlier this week. In the photos published by the DailyMail, a smiling Kim is dressed more casually than fans usually see her, wearing a white high-thigh bodysuit, gray sweatpants and sneakers. As for Pete, he looks as happy as ever in a navy Calvin Klein hat, a black T-shirt, a pair of plaid SKIMS pajama pants, yellow socks and colorful New Balance sneakers.

The rumored couple were celebrating Pete’s 28th birthday in Palm Springs, and previously posed for pics with Flavor Flav and Kim’s mom, Kris Jenner. For the photo, the group were all wearing matching SKIMS PJs.

As for the seriousness of their relationship, a source tells ET that the mother of four and the Saturday Night Live star “are connecting on a deeper level.”

“Kim and Pete are dating and having a great time together,” the source tells ET. “Pete is a romantic and goes out of his way to make Kim feel special. Kim thinks Pete is hysterical and he’s constantly making her laugh, but they also have been connecting on a deeper level.”

This isn’t the first time Kim and Pete have been photographed holding hands. In late October, they first sparked romance rumors when photographed clutching each other’s hands on a rollercoaster at Knott’s Scary Farm.

“They’re enjoying getting to know each other better and having a lot of fun,” the source adds.

Another source tells ET, “Pete and Kim are 100 percent dating and are very into each other. They are pretty much inseparable and very affectionate when they’re together. They are supportive of each other’s projects and are really taking an interest in what the other is passionate about. Pete has been in a great mood since him and Kim got together and he is very calm, chill and easy to get along with.”

The comedian, who was previously engaged to Ariana Grande and has dated a number of other celebrities, is the first man Kim has been romantically linked to since filing for divorce from Kanye West back in February.

“Kim has been protective of Kanye and his feelings,” another source told ET. “She has been trying to keep her hangouts with Pete low-key, because she doesn’t know how he will react.”

Kim Kardashian and Pete Davidson Are ‘Connecting on a Deeper Level’