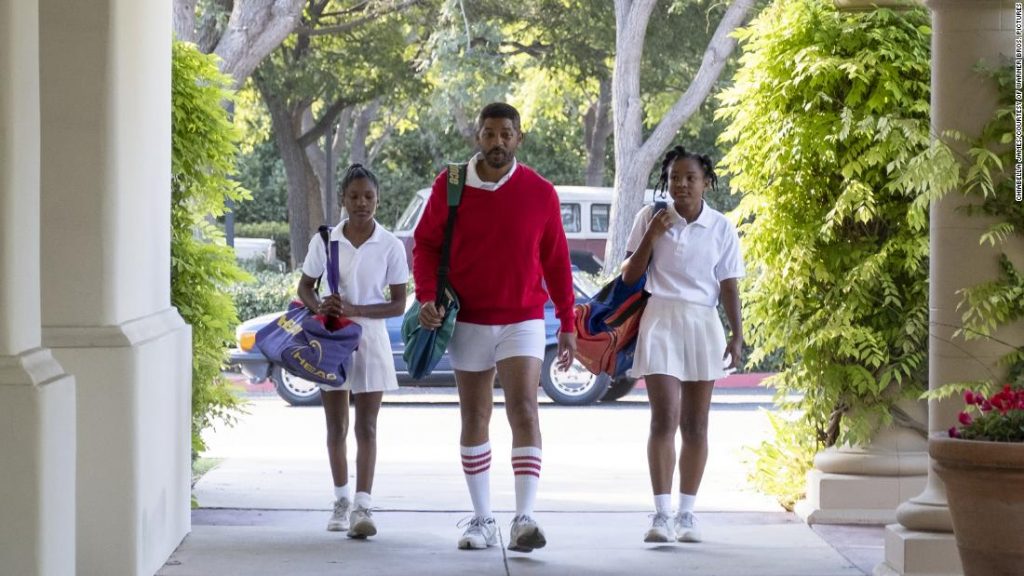 Share on facebook
Share on linkedin
Share on twitter
Share on email
The film actually follows a fairly concentrated stretch in the formative years of Venus (Saniyya Sidney) and Serena Williams (Demi Singleton) under the watchful eye and tutelage of their father Richard, who speaks frequently of the 78-page plan he mapped out for conquering the nearly all-White tennis world before they were old enough to hold a racquet.
“I’m in the champion-raising business,” Williams announces as he makes the rounds looking for a coach, met with dismissive and vaguely racist replies, including “You ever think about basketball?”
Williams can be imperious (hence the title) and overbearing, much to the occasional chagrin of his daughters and wife (Aunjanue Ellis), who is no wallflower when it comes to the coaching chores or speaking her mind.
The portrait that emerges from director Reinaldo Marcus Green and writer Zach Baylin consistently paints him as a heroic figure, protecting his daughters from dangers in the community, stressing their education as well as their ground strokes and working tirelessly to advance their careers, perusing tennis magazines while holding down a job as a night watchman.
Read More
Any excesses, such as having the girls practice in a pouring rain, are filtered through that prism. And obviously, Williams’ determination to “stick to the plan” paid off handsomely, despite the irritation and exasperation of tennis coaches (the most prominent played by Tony Goldwyn and Jon Bernthal) riled by his refusal to follow the customary script, including his decision to pull Venus out of juniors tournaments.
Smith not only captures the cadence of Williams’ voice but the unwavering confidence that he embodied, absolutely convinced that he knew what was best for his girls. It’s down the movie’s final stretch, as those plans begin to bear fruit, that “King Richard” feels more and more conventional, from the stirring music to the questions of how and when to cash in on Venus’ prowess while the younger Serena is left behind, but as we all know, not for long.
Smith (who also produced the film) is receiving a vigorous push for awards consideration, and he certainly nails the role in a way that belongs in that conversation, even if the movie as a whole seems unlikely to join him.
Perhaps foremost, “King Richard” is framed as a response to the criticism and second-guessing that the outspoken Williams faced as his daughters took the tennis world by storm, which might explain why both signed on as executive producers.
Indeed, it’s hard to escape the sense that “King Richard” exists in part to let the Williams family set the record straight. And when it comes to giving Williams his due as both a tennis guru and a father, in this case, love means everything.
“King Richard” premieres Nov. 19 in US theaters and on HBO Max, from Warner Bros., like CNN, a unit of WarnerMedia. It’s rated PG-13.