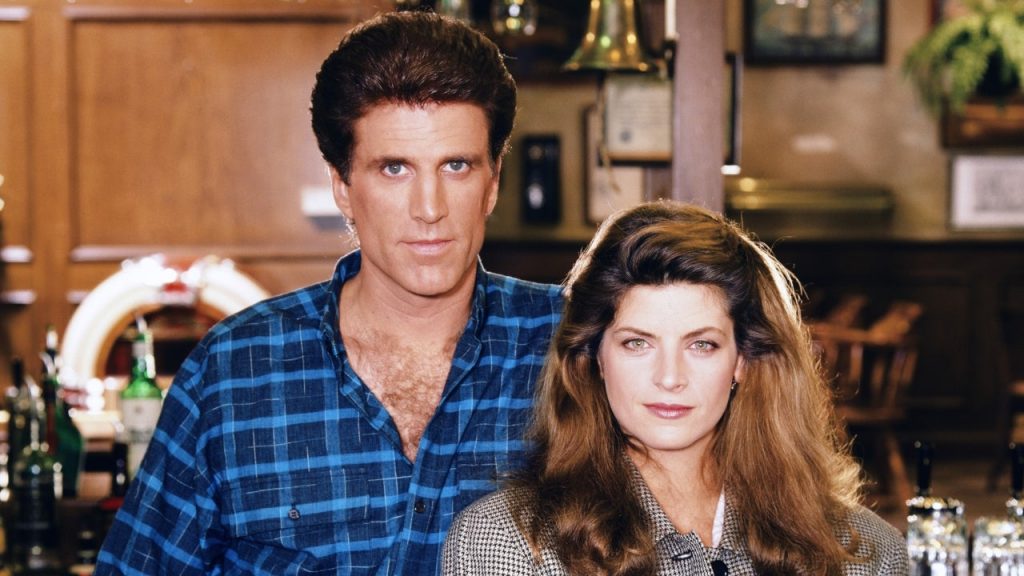 Kirstie Alley‘s Cheers co-stars are raising one final glass to their friend. On Monday, it was revealed that Alley died following a short battle with cancer. Her rep confirmed to People that it was colon cancer. She was 71.

Alley joined the cast of Cheers on season 6, and portrayed Rebecca Howe. During her time on the show, she earned both an Emmy for Outstanding Lead Actress and a Golden Globe for Best Actress.

On Tuesday, Ted Danson, who played Sam Malone on the beloved series, remembered the late actress.

“I was on a plane today and did something I rarely do. I watched an old episode of Cheers. It was the episode where Tom Berenger proposes to Kirstie, who keeps saying no, even though she desperately wants to say yes. Kirstie was truly brilliant in it,” the 74-year-old actor said in a statement to ET.

“Her ability to play a woman on the verge of a nervous breakdown was both moving and hysterically funny. She made me laugh 30 years ago when she shot that scene, and she made me laugh today just as hard,” Danson continued. “As I got off the plane, I heard that Kirstie had died. I am so sad and so grateful for all the times she made me laugh. I send my love to her children. As they well know, their mother had a heart of gold. I will miss her.”

Kelsey Grammer, who played Frasier Crane on Cheers and the spin-off series Frasier, also paid tribute to the late actress. “I always believed grief for a public figure is a private matter, but I will say I loved her,” the 67-year-old actor said in a statement to ET.

Rhea Perlman, who played Carla Tortelli on the sitcom, chimed in about her bond with Alley and their love for their children.

“Kirstie was a unique and wonderful person and friend. Her joy of being was boundless. We became friends almost instantly when she joined the cast of Cheers,” the 74-year-old actress told ET. “She loved kids and my kids loved her too. We had sleepovers at her house, with treasure hunts that she created. She had massive Halloween and Easter parties, and invited the entire crew of the show, and their families. She wanted everyone to feel included. She loved her children deeply. I’ve never met anyone remotely like her. I feel so thankful to have known her. I’m going to miss her very, very much.”

Cheers ran for 11 seasons from 1982 to 1993. Following her time on the NBC sitcom, Alley went on to appear in Veronica’s Closet, Fat Actress, Kirstie and Scream Queens, with big screen credits that include Star Trek II: The Wrath of Khan, Summer School,Look Who’s Talking, It Takes Two and Drop Dead Gorgeous.

News of Alley’s death was confirmed by her children on Monday.

“To all our friends, far and wide around the world … We are sad to inform you that our incredible fierce and loving mother has passed away after a battle with cancer, only recently discovered,” read the statement. “She was surrounded by her closest family and fought with great strength, leaving us with a certainty of her never-ending joy of living and whatever adventures lie ahead. As iconic as she was on-screen, she was an even more amazing mother and grandmother. We are grateful to the incredible team of doctors and nurses at the Moffitt Cancer Center for their care. Our mother’s zest and passion for life, her children, grandchildren and her many animals, not to mention her eternal joy of creating, were unparalleled and leave us inspired to live life to the fullest just as she did. We thank you for your love and prayers and ask that you respect our privacy at this difficult time.”

Alley is survived by her kids, 30-year-old True and 28-year-old Lillie, and her grandson, Waylon.

Kirstie Alley Was Battling Colon Cancer Prior to Her Death, Says Rep