Latin artists once had to cross over to achieve global success. Now listeners are crossing over to them 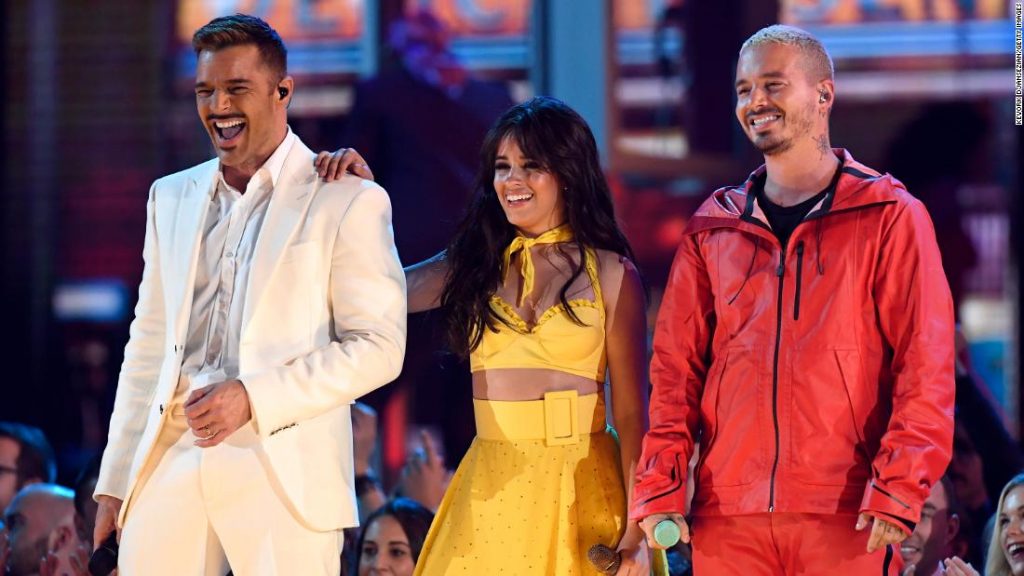 Share on facebook
Share on linkedin
Share on twitter
Share on email
For decades, well-established Latin artists rerecorded their music in English and made other adjustments to cross over into the American mainstream. Now, Latin pop artists like J Balvin and Bad Bunny grace the covers of major magazines and appear on late night talk shows without changing their music — English-speaking listeners are instead crossing over to them.
“You go to Jimmy Fallon, Jimmy Kimmel, and every week almost there’s a Latin artist performing in Spanish. And it’s perfectly normalized,” says Leila Cobo, author of “Decoding ‘Despacito’: An Oral History of Latin Music.”
“That just is an example of how popular the music has gotten and the fact that now it’s regarded as mainstream pop not just niche music.”
As many of these artists prepare to take the stage at the Latin Grammys on Thursday, here’s a look back at how Latin pop music — with influences from reggaeton to cumbia to bachata — became the cultural force that it is today.
Read More

Latin artists have been crossing over for decades

Perhaps the first Latin artist to “cross over” was Damaso Perez Prado in the 1950s, says Cobo.
The Cuban band leader, pianist and arranger rose to fame in Mexico for playing mambos and other Latin rhythms and soon became the label RCA Victor’s biggest artist in the Latin American market, Cobo writes in her book. After a version of Perez Prado’s “Que Rico el Mambo” recorded by American big band leader Sonny Burke became a hit in the US, the label moved Perez Prado from its international division and began promoting him in the American pop market.
“They discovered this guy whose music was very popular around the world and in the States, and they said, ‘Well, why don’t we treat him as if he were an American artist instead of treating him as if he were a Latin American artist only for Latin America?” Cobo says.
From there, his popularity exploded, Cobo writes in her book. He launched a US tour, selling out concerts across the country. With songs such as “Mambo No. 5,” “Cherry Pink (And Apple Blossom White)” and “Patricia,” he helped popularize the mambo across North America, reaching Latin and non-Latin audiences alike.
How Selena’s glorious legacy shows off the vast complexity of Latinos
Over the decades, there were some similar crossover success stories. Ritchie Valens made the Mexican folk song “La Bamba” a hit on the US charts in the late 1950s. Miami Sound Machine, the band fronted by Gloria Estefan, recorded a number of English-language albums in the ’80s. Spanish singer Julio Iglesias would go on to record songs with Willie Nelson, Diana Ross and Frank Sinatra, among others. But these examples were anomalies, according to Cobo.
“Coming from Latin America and singing in Spanish was still a little bit strange and not common for the mainstream, even though it was happening everywhere,” she adds.
All that changed in the late ’90s with the arrival of the so-called “Latin Explosion.”

The ’90s turned the crossover into a movement

Ricky Martin’s performance at the 1999 Grammy Awards marked a breakthrough for Latin music.
The Puerto Rican captivated American audiences with a bilingual rendition of “La Copa de la Vida” (The Cup of Life), a song that had been the anthem of the World Cup a year earlier. By that time, Martin was already a star in Latin America, performing for years as part of the boy band Menudo before going on to sell out stadiums as a solo artist.
Executives at the label Sony Music Entertainment, which signed Martin to its Latin music division in the early ’90s, were already looking at ways that they might market Martin to an English-speaking audience, Cobo says.
“Here was a guy that was playing stadiums in Latin America,” Cobo says. “If you [were a label executive and you] went to a Ricky concert in Argentina and you saw 50,000 people, you wanted to see what you could do with the guy elsewhere.”
But before that moment at the Grammys, most Americans had no idea who he was.
Jennifer Lopez played the long game to the Super Bowl
Soon after his rousing performance, Martin released his first English-language album, which feaured the smash hit single “Livin’ La Vida Loca.” The album debuted at No. 1 on the Billboard 200, breaking sales records, while the single topped the Billboard Hot 100 for five weeks straight.
Martin set in motion a pop culture phenomenon that saw other Latin artists at the time achieve similar success on the US charts. Some were US-born like Jennifer Lopez (whose debut album was recorded in English) and Marc Anthony (who primarily recorded his music in Spanish before his 1999 self-titled solo album was released). Others were international artists like Shakira and Enrique Iglesias. Four out of these five crossover stars were signed to Sony Music, which some credit for engineering the Latin Explosion.
“Right in the crux of 1999, 2000, it was a very unusual time where you had five extraordinary artists coming out at the same time, which is not common,” Cobo says. “There was a bit of accident, a bit of planning … All the pieces came together.”
While artists like Shakira debuted in Spanish and later recorded English-language albums that led to their stateside success, others like pop star Christina Aguilera — who released the album “Mi Reflejo” after the success of her self-titled debut — found fame with US audiences before they started making albums in Spanish. (Lopez’s Spanish-language debut didn’t land until 2007.)

Then streaming changed the game

But the phenomenon was short-lived, as critics later documented. And after a few years, the so-called “Latin Explosion” that promised to transform the US pop market — as well as the US itself — imploded.
“Not only did the boom’s stars prove to be mere comets, but the flash and bang of the carefully manufactured pop boom blinded the public to what’s really worthwhile in Latin music — organic, cross-cultural sounds that continue to evolve under the mass media’s radar,” former columnist Agustin Gurza wrote in the Los Angeles Times in 2004.
After that period, Latin music fell into a slump, according to Cobo.
While some Latin pop hits such as Daddy Yankee’s “Gasolina” broke into the US mainstream, the Latin music industry took a downward turn as music went digital, she says. Piracy was rampant in Latin America, she explains, causing major labels to lose money and invest less in artist development.
But as music shifted toward streaming, the industry began to recover. And in 2017, one song would catapult Latin pop to an entirely new level of global success: “Despacito.”
Three months after the song from Puerto Rican singer Luis Fonsi featuring Daddy Yankee was released, Fonsi got a call from his record label telling him that Justin Bieber had heard the track at a Colombian nightclub and wanted to record a remix.
The story behind ‘Despacito’s’ rise to the top
Days later, the “Despacito” remix featuring Justin Bieber was released. The rest is history — the song rose to the top of the Billboard Hot 100 and stayed there for 16 consecutive weeks, breaking a record at the time. It was the first Spanish language song to top that chart since “Macarena” in 1996. It also topped the charts of dozens of other countries, and became the most-watched YouTube video of the decade.
“It’s not very easy to [top the Billboard Hot 100] when it’s a different language,” Fonsi said in a 2017 interview with CNN. “That is very special — that we were able to break that language barrier and just connect with people through music. From a career level, it’s very important. But to me, I’m just very proud that Latin music has grown so much and people are just really connecting to it.”

The success of “Despacito” kickstarted a new wave of mainstream success for Latin music — one that shows no signs of slowing down.
Since “Despacito,” other predominately Spanish-language tracks have performed well on the charts, too — from J Balvin’s “Mi Gente” to Rosalia’s “Malamente” to the No. 1 hit “I Like It” from J Balvin, Cardi B and Bad Bunny.
Streaming has made it easier for listeners to discover music scenes such as reggaeton and Latin trap without those artists needing the marketing machine of a major label — in other words, English-speaking audiences are crossing over into Latin music.
“The world is coming together and sort of getting smaller,” Fonsi told Rolling Stone in 2019. “Nowadays people are not afraid to change their normal listening habits and listen to different things. It’s like, ‘Hey, maybe I don’t understand every single word that they’re saying, but this song makes me feel this and it makes me move and I connect to it.’ To be able to sing in both languages, to work with people from around the world and mix styles and cultures? I think that is truly what music should be about.”
Despite finding major success outside of Latin America, artists such as J Balvin and Bad Bunny have recorded few songs in English and have indicated that they feel no compulsion to do otherwise.
“Why do I have to change?” Bad Bunny said during a recent appearance on The Daily Show with Trevor Noah. “No one has [told] a gringo artist that you have to change. This is who I am. This is my music. This is my culture. If you don’t like it, don’t listen to me. If you like it, you know.”
However, there’s still progress to be made, some critics argue. Suzy Exposito of the Los Angeles Times pointed out earlier this year that the 2021 Grammy Award nominations largely shut Latin artists out of the top categories and relegated them to the Latin categories. But there have been some changes. The Recording Academy announced in April that it would be adding a fifth category to the Latin field, meaning the 2022 show will have more awards for Latin music than pop, rock, rap or country.
Others, like Cobo, are more hopeful. The landscape, she says, is much more fluid in today’s era — crossover not required. Some Latin artists switch seamlessly between collaborations with other Latin artists and US pop artists and between bilingual songs and exclusively Spanish-language tracks. Others choose to record mostly in Spanish because it feels authentic to them — knowing that despite their decision, or perhaps because of it, they have legions of fans behind them.