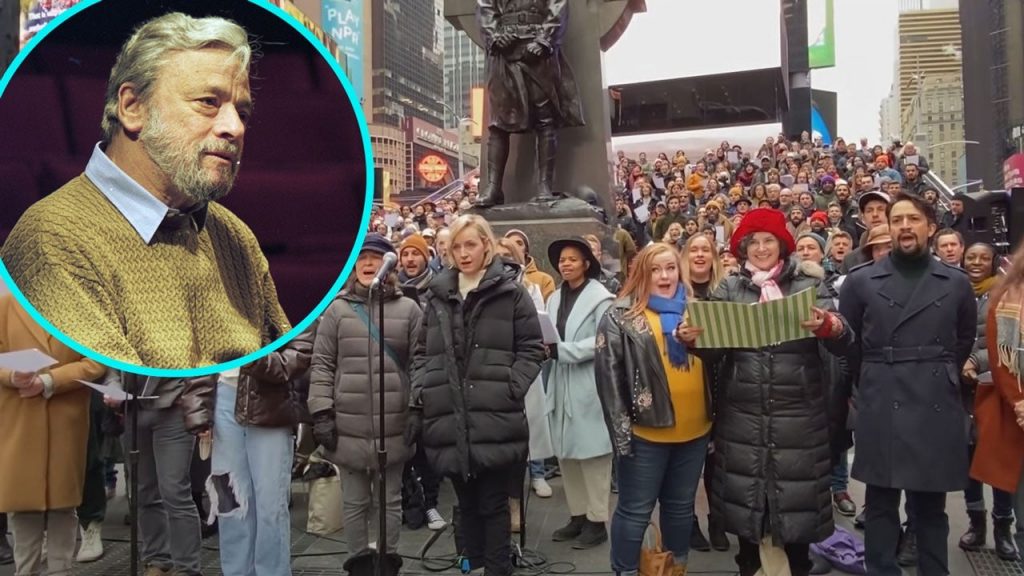 Celebrating the legacy of a theater legend. Hundreds of stage stars and members of the Broadway community came out to pay musical tribute to the late Stephen Sondheim on Sunday.

Members of nearly every Broadway company and many others whose roots run deep in theater stood on the red steps in Times Square to honor the incomparable life and legacy of the lyricist and composer, who died on Friday at age 91.

Together, the large assembly of mourners and fans — which included Broadway icons including Lin-Manuel Miranda, Laura Patton, Sara Bareilles, Josh Groban and many more — performed one of Sondheim’s most revered creations, “Sunday” from his acclaimed Sundays in the Park With George.

The musical earned Sondheim the 1985 Pulitzer Prize for Drama, and the original production went on to earn two Tony Awards. The song itself is considered to be one of his most powerful musical creations.

After the tribute event, Bareilles told Variety that the performance “felt like church.”

“In his remembrance, we did what theater does best. We sang and raised our voices and came together in community,” Bareilles shared.

The Broadway legend behind shows like Into the Woods, Company and many more died on Friday morning at his home in Roxbury, Connecticut. He was 91.

Sondheim was awarded nine Tony Awards (including a Lifetime Achievement Tony in 2008), an Academy Award, eight GRAMMY Awards, a Pulitzer Prize, a Laurence Olivier Award, and a 2015 Presidential Medal of Freedom. He is survived by his husband, Jeffrey Romley, and a half brother, Walter Sondheim.

PrevPreviousMatthew McConaughey Announces He Will Not Run for Governor of Texas
NextUlta Cyber Monday Sale 2021: The 15 Best Beauty Deals to Shop NowNext