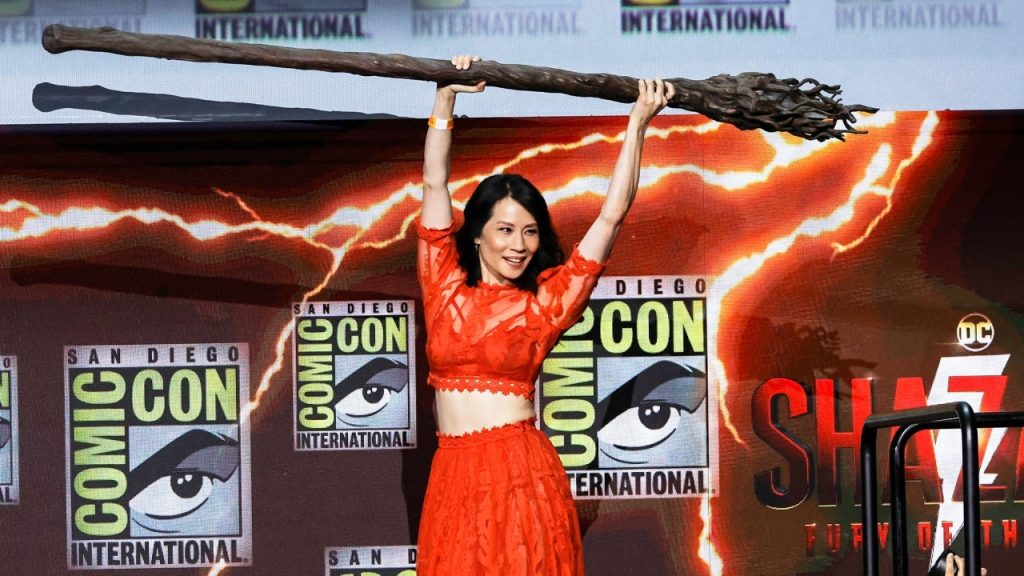 Lucy Liu was thrilled to take the stage at San Diego Comic-Con on Saturday to preview her upcoming role in Shazam! Fury of the Gods. So thrilled in fact, she brought her own magical staff!

“The excitement is palpable as soon as you step on the stage,” Liu told ET following her SDCC experience. “Even before that, when you’re behind the curtain, you’re sort of like, ‘Wow, everyone’s here!’ And when they turn the lights on you see the mass of people and realize this is a really special moment.”

Liu shared with the Comic-Con crowd that she “really enjoyed playing a goddess” in the upcoming film, alongside fellow Shazam! newcomers Helen Mirren and Rachel Zegler.

“To be part of the DC universe and this world is probably the most exciting thing of my career,” she added. “It was an honor to be a part of something this special… I feel like I’m in a place where I’m home.”

The actress doubled down on that thrill when speaking to ET about her character, whom she shared is “coming in with a specific story and a specific mission.”

“It’s like the little girl in me comes out,” she raved. “I mean, you grow up reading the comics, and at that time they didn’t have movies like this, you know? Seeing it on TV and then having your own life be a part of something like that is really the icing on the cake… It’s the top of the top.”

Getting to be a part of increasing representation in big screen superhero projects is also something that “means the world” to Liu.

“I think that the superhero world is… about belonging and being a part of that,” she shared. “Understanding that everybody now is included, it makes that world so much bigger. So I think diversity counts, and people are recognizing that more and more.”

And while she’s ready to show off her divine abilities as she takes on Zachary Levi’s Shazam and his super-powered family, Liu said Fury of the Gods is “definitely a funny movie.”

“It also has very dramatic moments,” she continued, “but I think the ultimate idea behind it is family — or Shazam-ily!”

“I love that, because to me, that’s really what matters,” she continued. “I think, after all of this time of being apart, it’s so nice to come together and remember that and to understand how important it is.”

Liu shared that her own family, 6-year-old son Rockwell, is still a little young to be totally familiar with his mom’s work, though she added with a laugh, “I think when he gets older, yeah, he’ll probably ask me, ‘Why are you always hitting people? Why are you always in a fight scene?'”

“He doesn’t know that yet, but I think as time goes on, he’ll maybe see the different levels of work that I have done in terms of action and have something to say about it,” she noted. “‘Cause they always do!”

Liu’s on-screen butt-kicking prowess has been legendary for over two decades now, with one of her breakout film roles coming alongside Drew Barrymore and Cameron Diaz in 2000’s Charlie’s Angels. So, would she be down to reunite with her fellow Angels now that Diaz has come out of acting retirement?

“I don’t know! Those are some very busy ladies,” she shared. “But I adore and love them, so anything that they have to offer I’m sure we would have a very good time doing it.”

“But, as I said before in another interview, I didn’t even know [Cameron] was out of the business,” she added. “In my heart, she’s always right here.”

Shazam! Fury of the Gods is in theaters Dec. 21.

Check out more of Entertainment Tonight’s coverage of Comic-Con 2022 below!