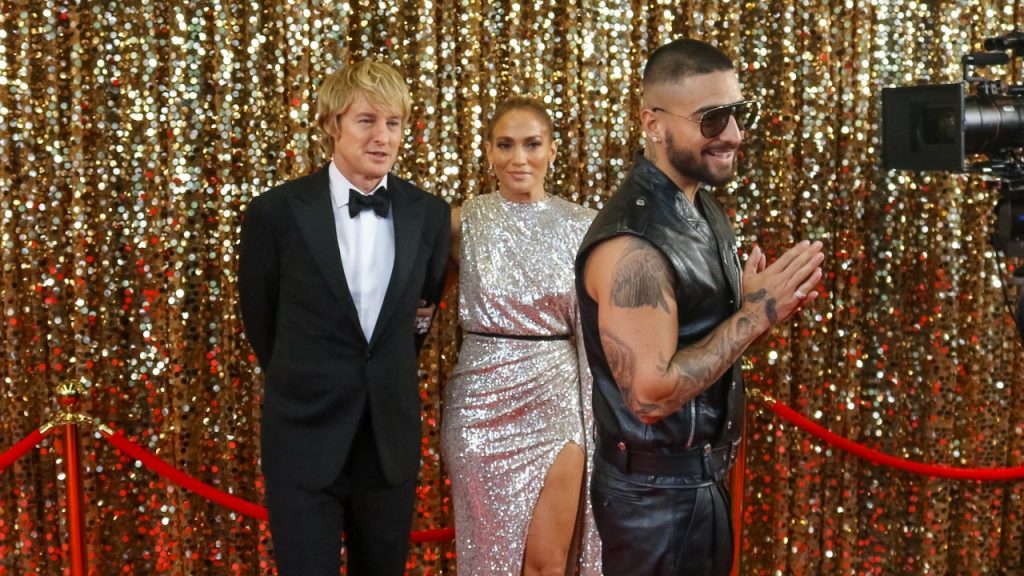 Are you ready to say yes?

The Marry Me trailer starring Jennifer Lopez, Maluma and Owen Wilson officially dropped on Thursday. After a number of delays amid the pandemic, the film is finally set to be released in February 2022.

The first look shows J.Lo as superstar Katalina “Kat” Valdez, who is engaged to the equally successful Bastian, played by the Colombian crooner. As the two are performing together at a concert, Kat finds out Bastian is having an affair with her assistant and spontaneously picks a random math teacher (Wilson) out of the crowd to marry instead.

The clip then shows Kat and her new love navigate their whirlwind romance. It also features a new song featured in the movie and soundtrack.

Last year, Lopez shared that she recorded an album for the movie. “So there’s all new songs and all new music with it. So it’s exciting,” she told Jimmy Fallon on The Tonight Show. “I think I have like six or eight songs and Maluma does two or three.”

She also joked that she wouldn’t be opposed to doing a Marry Me Tour. “You know what? I could do that,” she said, before adding, “But not this year. Not this year.”

Wilson and J.Lo previously worked together on Anaconda, and told ET in June, “We really had a good cast…It was nice to, sort of, meet up with Jen after all these years and work on Marry Me.”

Meanwhile in October 2019, Maluma told ET that he had an “amazing” time filming in New York. “It’s been an amazing month, actually. I’ve been here in New York for two or three weeks shooting the movie with Jennifer,” he said. “It’s been such an amazing experience also working, doing music. I mean we never stop.”

For more on the film, see below. Marry Me arrives in theaters on Valentine’s Day.

‘Marry Me’: Everything We Know About Jennifer Lopez’s Romantic Comedy

PrevPreviousDavid Arquette Is Grateful for Shooting ‘Scream’ With Ex Courteney Cox: ‘I Got a Baby Out of It’
Next2021 American Music Awards Performers: Mickey Guyton and MoreNext