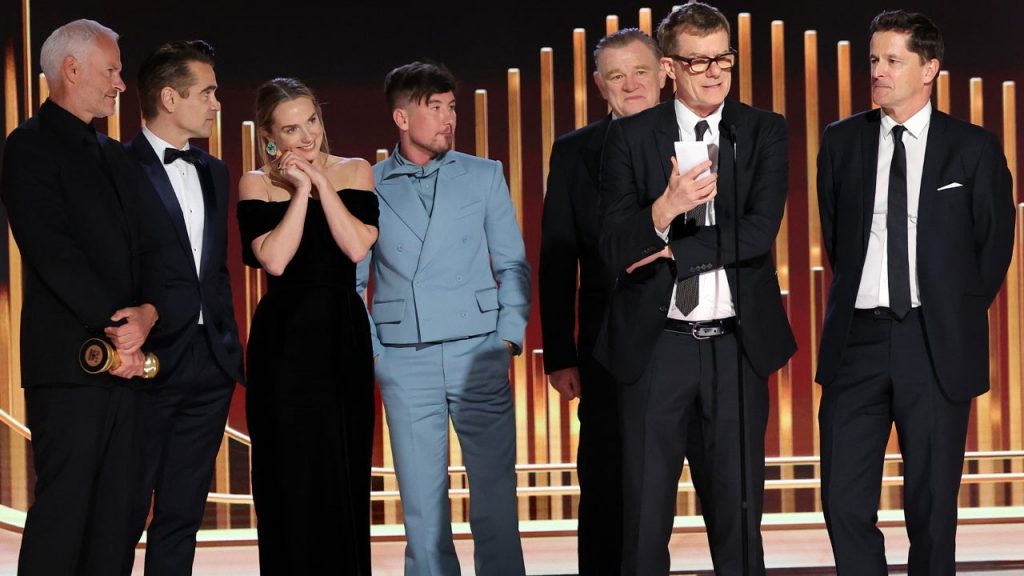 Crack open a celebratory Guinness, The Banshees of Inisherin just won big at the 2023 Golden Globes!

McDonagh began by thanking his team for making his project possible, and added that the process had brought him “so many new friends.”

Producer Graham Broadbent then took the microphone, saying, “We had a very happy time making this film in Ireland,” quipping, “We are still friends at the end of it, we still speak to each other.”

The joke was a reference to the themes of tested friendship that the film deals with, and the room laughed in response. Broadbent also thanked the cast and crew, including Farrell and Gleeson.

Farrell won the award for Best Actor in a Motion Picture – Drama earlier in the evening.

Broadbent finished by referring to McDonagh as a “unique and visionary writer and director.”

ET spoke with Farrell earlier this week at the National Board of Review Annual Awards Gala, where he was presented with the Best Actor honor for his work in the dark dramedy, and opened up about why he “loved working on this film for probably very obvious reasons.”

According to the actor, earning awards for Inisherin feels even more meaningful because of how much it represents the hard work and collaborative spirit of the production and everyone who worked on it.

“I’m getting texts from makeup artists that worked on the film, I’m getting texts from wardrobe people that worked on the film, so there’s that sense of community around it still to this day,” he shared. “It’s not just all about us who are receiving things. It feels like you’re representing others who are at home, having a look and enjoying the success. That makes it easier for me.”

How to Watch ‘Everything Everywhere All at Once’ — Now Streaming

PrevPreviousSteven Spielberg Reflects on Humble Beginnings While Accepting Golden Globe for ‘The Fabelmans’
NextEddie Murphy Pokes Fun at Will Smith Slap as He’s Honored With Cecile B. DeMille AwardNext