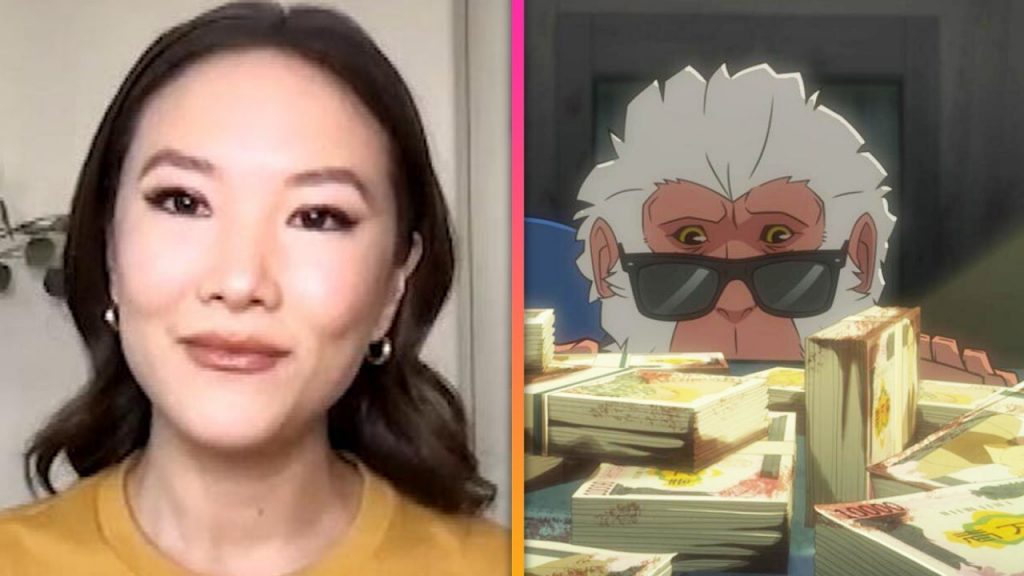 Marvel’s Hit-Monkey, a new animated series dropping Wednesday on Hulu, kicks off when a Japanese snow monkey’s tribe is slaughtered. As a result, he joins forces with the ghost of an American assassin and together, they begin killing their way through the Yakuza underworld. The voice cast is led by George Takei, Jason Sudeikis, Olivia Munn, Ally Maki, Nobi Nakanishi and Fred Tatasciore.

Maki, who voices Haruka in the series — an honest cop with desires to bring justice to Tokyo — took part in a virtual Q&A following a special online-only premiere with ET, where the actress opened up about joining the series, which was co-created by Will Speck and Josh Gordon, her character and the impact she hopes the series has for inclusivity and Asian representation in Hollywood. The event was co-hosted by Hulu, Maki’s organization Asian American Girl Club and Tremendous Communications.

“I had auditioned for a couple of different women in the show and then I ended up getting Haruka, and it was such a joy. When I went into the audition, I got to meet Josh Gordon and Will Speck, who are the creators of the show and they had such great energy and they were excited about the show, and I know they wanted to be respectful of Japanese culture and all that,” Maki shared. “Once I signed onto the show, it was a go and we had our first session, I was able to kind of really create the character in the room… On that first day, we went through the first one or two episodes when she gets introduced and I instantly fell in love with her. And we figured it out on that first session.”

Getting to dig into Haruka on the ground level and mold her into a strong, capable and independent woman was particularly appealing for Maki, who also lent her voice to Toy Story 4.

“I think with any character, especially an Asian American female character, it’s like you really want to do that character justice and make sure she’s fully nuanced and there are many layers to her and it’s not just one thing. I think that was what was really important to me as with any character that I walk into,” she explained. “But I think what was cool about Haruka is when she first comes in the second episode, she is new to town. She comes from a small town in Hokkaido. She’s new to the scene. She’s definitely the only woman on the force in that station. She’s getting paired up with Ito (voiced by Nakanishi), who is kind of gruff. He’s got his alcohol problems, he’s this laughing stock of the police department. So she’s walking into a lot. And it was really important — I worked with Josh and Will on where she starts and where she ends. I think that’s one of my favorite parts of her journey.”

“She’s learning how to use her voice and throughout the season, you get to see how she’s learning — not only from her environment of being the only woman on her squad, but also from her partnership with Ito because they learn a lot from each other,” Maki added. “Their styles are so completely different. He learns a lot from her and she learns a lot from him. And at some point, they kind of meet in the middle. It was so much fun.”

As for what audiences are in for when they sit down to watch Hit-Monkey, Maki hints the action is only just beginning.

“Definitely expect some awesome girl power team-up. I mean, Olivia Munn is the other woman in the show and we were friends before and she’s just so awesome and supportive. Her character [Akiko, politician Shinji’s fearless niece,] is so strong in such a different way. I think it’s awesome to see these two Asian American female characters voiced by Asian American women that are so different but so uniquely themselves and both fighting for things they care so deeply about — even though Olivia and I were never in the booth together,” she revealed. “Sometimes I would send a text and be like, ‘I just missed you!’ Or she’d send a little thing: ‘I’m recording this today!’ She’s awesome. [The characters] are just two very smart, ambitious and powerful in their own ways. I can’t wait for the audiences to see Haruka and Akiko, how their storylines mesh with each other.”

“Beyond that, I think Haruka has such an interesting journey in season 1 of really getting her values in place but also, when they’re tested, what does that look like? And believing in what she believes in. There’s a lot of great messaging within this storyline this season,” Maki teased.

Your Streaming Guide to Netflix, Hulu, HBO Max, Disney Plus and More