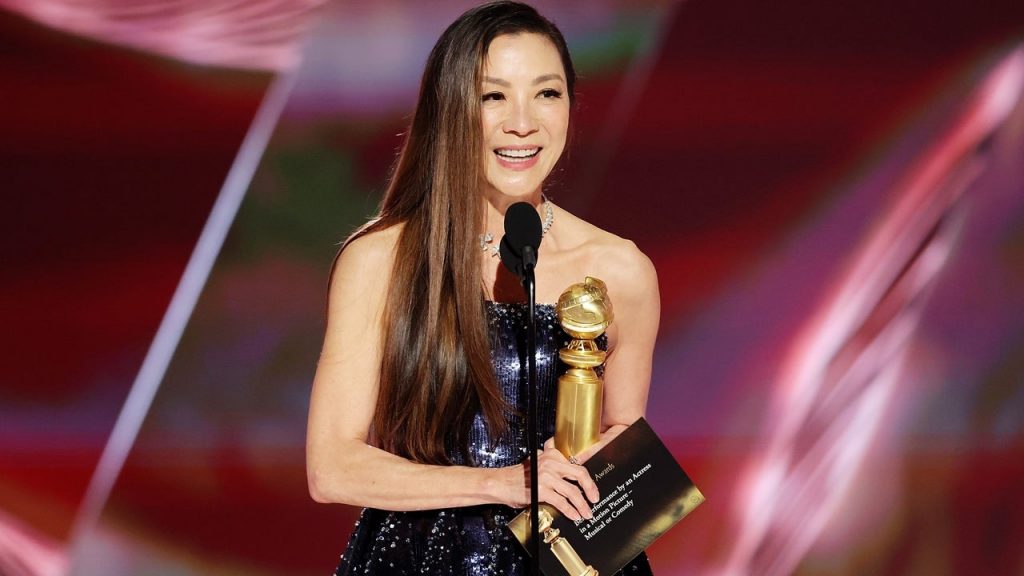 Michelle Yeoh’s outstanding awards season continued on Tuesday with a win for Best Actress in a Motion Picture – Musical or Comedy at the 2023 Golden Globes!

The actress took the stage to accept the award for her starring role in Everything Everywhere All at Once, becoming just the second Asian actress to win in either of the Globes’ lead acting categories.

“I’m just going to stand here and take this all in,” a stunned Yeoh began. “Forty years — not letting go of this. So just quickly, thank you Hollywood Foreign Press for giving me this honor. It’s been an amazing journey, an incredible fight to be here today. But I think it’s been worth it.”

Speaking about her fight to get to this point in her career, Yeoh recalled being doubted as an Asian actress.

“I remember when I first came to Hollywood, it was a dream come true until I got here because — look at this space, I came here and was told, ‘You’re a minority and I’m, like, ‘No, that’s not possible,’ and then someone said to me, ‘You speak English?’ I mean, forget about them not knowing Korea, Japan, Malaysia, Asia, India. And then I said, ‘Yeah, the flight here was about 13 hours long, so I learned,” she recounted.

Yeoh continued, “As time went by, I turned 60 — last year — and I think all of you women understand this as the days, the years, and the numbers get bigger, it seems like opportunities start to get smaller as well. And it probably was at a time where I thought, ‘Hey, come on, girl, you had a really, really good run, you worked with some of the best people, Steven Spielberg, Jim Cameron, and Dan Boyle. And so, it’s good, it’s all good.’ Then along came the best gift, Everything Everywhere All at Once.”

After remarking on the gift that has been the sci-fi film, Yeoh thanked the production company, cast and crew of the multi-nominated picture.

“I thank you A24 for believing in these two goofy, insanely smart, wonderful geniuses, the Daniels, who had the courage to write about a very ordinary immigrant, aging woman, mother, daughter. She was being audited by the IRS, played by the most amazing Jamie Lee Curtis. I love you,” she said. “I was given this gift of playing this woman who resonated so deeply with me and with so many people because, at the end of the day, in whatever universe she was at, she was just fighting. Fighting for love for her family. And without — Evelyn Wong was no one without Raymond Wong and there was no joy in her life without Stephanie Hsu. The most amazing Stephanie Hsu and my hot dog lover, Jamie Lee Curtis.”

“To Jonathan Wong, my producer, thank you for being there with us every step of the way,” Yeoh added before thanking the Asian actresses who have come before her and the ones who will follow in her footsteps. “My manager, David Unger, and Kit Wong, who believed in me. And this is also for all the shoulders that I stand on, all who came before me who look like me, and all who are going on this journey with me forward. So, thank you for believing in us. Thank you. Thank you so much.”

Speaking to ET ahead of the show, Yeoh spoke more about what representation and recognition means to her.

“It’s like, you know, you work and you work and you put your head down and you think it’s OK because you love what you’re doing and you’re giving your best and you’re working with people that you really, really enjoy, and they become like family and all this is not what you started off with and it’s OK, it’s OK,” the Crazy Rich Asians star exclaimed. “But, of course, when you look at your peers and you go like [sighs] and suddenly now — to be able to be getting understanding — what it feels like to really be seen, it does make a difference.”

The 2022 Golden Globes were not televised after being canceled by NBC, and were held without an audience or red carpet. In a press release announcing the Golden Globes return this year, Frances Berwick, Chairman, Entertainment Networks, NBCUniversal Television and Streaming, noted the HFPA’s ongoing efforts to increase diversity in their voting membership.

His statement read in part, “This diverse voting body is now represented by 62 different countries around the world. Combined with the current HFPA membership, the total Golden Globe Awards voting body is now 52% female, 51.5% racially and ethnically diverse, with 19.5% Latinx, 12% Asian, 10% Black and 10% Middle Eastern.”