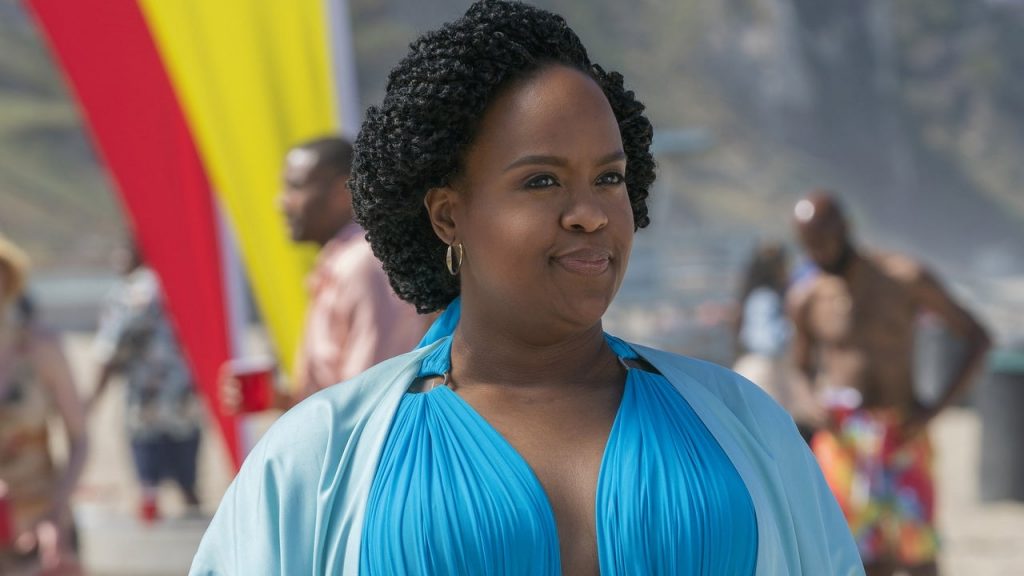 With episode 6, Insecure has officially passed the halfway point of its fifth and final season as the HBO comedy closes out its story about Issa (played by co-creator and star Issa Rae) and her best friend, Molly (Yvonne Orji), navigating the ups and downs of adulting in Los Angeles.

Even though “Tired, Okay?!” largely focused on Issa and Molly both putting themselves out there when it comes to their personal and professional lives, it marked the directorial debut for writer Natasha Rothwell, who also co-stars on the series as Kelli.

While speaking to ET via Zoom from London, where she’s currently filming Wonka, Rothwell talked about stepping behind the camera for the first time, what’s in store for Kelli following her death scare, and moving beyond Insecure with roles on The White Lotus and in the Charlie and the Chocolate Factory prequel.

After being responsible for the shows-within-a-show on previous seasons and writing episodes, like season 3’s finale, “Ghost-Like,” with Rae and season 4’s “Lowkey Happy,” it was super important for Rothwell to helm an episode before the series’ run came to an end on HBO.

But it wasn’t until after being so heavily involved with producing “Lowkey Happy,” they officially decided to include Rothwell among the next season’s directors. It was an emotional moment for Rothwell, who recalls Rae pulling her aside after they finished shooting the episode to tell her, “You’re ready.”

“She just looked at me and I burst into tears, because I was just like, ‘I think I am too,'” she says.

And when it came down to helming episode 6, Rothwell couldn’t have been happier with the choice. Not only wasn’t Kelli in it (“I’m not ready for my Bradley Cooper days yet,” she jokes), but the themes of the episode really resonated with her. “This idea of owning your choices is a huge theme of the season. Like, making those decisions, being autonomous and feeling like you have agency in those decisions,” Rothwell says. “And I think it’s really an episode where we see decisions coming to a head, which is exciting.”

For Issa, that’s pushing back on the negative feedback she’s getting on The Blocc and finally facing her emotions when it comes to getting back together with Nathan (Kendrick Sampson). Whereas Molly finds herself overcompensating for her feelings over her mother’s health scare by throwing herself deeper into work and letting things get a little messy.

While Rothwell has written for these characters since the beginning of the series, being behind the camera gave her new perspective on Issa and Molly. By telling a story with more than language, the lens and composition of the frame “allowed me to explore who they are as characters in a visual way that I hadn’t been able to do before,” she says.

Not only that, but the episode gave Rothwell the opportunity to direct various kinds of scenes, from stunts to green screen to a sex scene. “I learned so much,” she says. “I was like, ‘Okay, I’ve got that certificate. I know how to do that.’ Like, I’m picking up tools along the way.”

“I was definitely so grateful to be able to earn those stripes with family because it was such a comforting thing to step into when you’re doing something for the first time,” Rothwell says, before revealing that she was determined to earn everyone’s respect at the same time. “I think I accomplished that and I was able to really tell a story that I wanted to tell.”

With her directorial debut behind her, fans can look forward to more of Rothwell onscreen as Kelli, as teased in the upcoming episode, “Chillin’, Okay?!,” which sees Issa, Molly, Kelli and Tiffany (Amanda Seales) reuniting for a long overdue girls’ night. “You’ll definitely see more Kelli after episodes 5 and 6, for sure. I think with all of the characters, folks will be super satisfied,” Rothwell says, before teasing what’s still to come from her character as she recovers from her death scare in the season 5 premiere.

“She knows who she is and what she wants. And it’s not until she’s confronted with the inevitability of death, hers specifically, this idea of legacy and like, ‘How do you want to be remembered?’ sets in,” Rothwell explains. “And I think putting those big questions on someone who hasn’t really questioned much has been the fun of exploring Kelli this season.”

For Rothwell, that’s been trying to understand this internal struggle and why those questions have unsettled Kelli so much. “Her work is on point. Her life is great. She’s balancing partying and being professional. She’s got all these plates spinning,” she says. “And yet, there’s this thing of something bigger that gets at her.”

Ultimately for Rothwell as a performer, these kinds of moments allow for her to go deeper with Kelli, which is something showrunner Prentice Penny wanted to do more of this season. Especially after seeing what she could do onscreen with the role in season 3, when Kelli feels left out while Tiffany is pregnant.

“There’s some there, there,” Rothwell says of crafting Kelli to have these layers. “Otherwise, you have a caricature and not a character.” And for both her and Penny, they wanted to make sure Kelli was more than a joke and wasn’t just the comic relief. “So, that’s a big thing for the character this season,” he previously told ET.

“I feel like for me, grounding her and giving her those moments of grounding really does elevate her for me as a performer,” Rothwell adds. And when looking back on her favorite moments as Kelli, it’s those deeper ones that resonate more than, say, her getting tasered at Beychella. One that jumps out is when the girls are looking for Tiffany at the end of season 4. “You really see Kelli concerned for her best friend and she’s on this mission — and by any means necessary — to find her. There’s a subtle moment on the bus where you just see panic sort of wash over her.”

But she quickly jokes, “Of course, peeing myself and then getting fingered in Swingers — who doesn’t love that?”

When it comes to looking beyond Insecure and life after Kelli, Rothwell has already made a huge impression as a hotel wellness employee named Belinda on creator Mike White’s surprise HBO hit, The White Lotus.

Given the nature of the show and her role opposite the likes of Jennifer Coolidge, Rothwell recalls the conversations she had with White and how much he understood the care she had for the character. “When you have a woman of color in a servile position in a mostly homogeneous cast, it was important for me to do that right,” she says.

And when it comes to the many, many scenes she shared with Coolidge, who starred as a depressed, wealthy guest named Tanya, Rothwell pinches herself. “I never thought I would be playing the straight man,” she says. “I had dreams of working with her, obviously, because she’s incredible. But I always thought, ‘Oh, we’d both be doing the comedy.’ But just being across from someone who’s just so effortlessly funny was like a masterclass.”

Recalling how their final scene together as Tanya returns to grab her sunglasses after turning down Belinda’s business plan was improvised in the moment by Coolidge, Rothwell prides herself on not breaking during taping. “Watching it onscreen is so deeply funny,” she says.

Although the series has been renewed for a second season, with Coolidge reportedly returning as Tanya, Rothwell says she hasn’t been a part of any conversations about returning. “I’m not privy to any talks, but I would absolutely jump at the chance to play her again. I think there’s so many stories to tell,” she shares.

No matter what happens, Rothwell returned to narrate a second season of 12 Dates of Christmas on HBO Max and has lined up a coveted role in the upcoming prequel to Charlie and the Chocolate Factory starring Timothee Chalamet as a young Wonka as well as Jim Carter, Keegan-Michael Key, Olivia Colman, Rowan Atkinson and Sally Hawkins in other undisclosed roles.

When it comes to being part of such a star-studded cast, “It’s truly a fever dream,” she says. “I’m very much an Anglophile and so, I followed the careers of Rowan Atkinson, Olivia Colman and Jim Carter for forever. And so, to be around these guys, I’m just trying not to fangirl.”

Beyond freaking out on set, Rothwell says Wonka, which is being helmed by Paul King, “is such a sweet film. The heartbeat of the film is kindness, which is why I jumped at the opportunity. It’s hard being away for four months, but I think putting more of this energy into the world is just so important.”

‘Insecure’: Jay Ellis on Lawrence’s Struggles With Condola and Breakup With Issa (Exclusive)