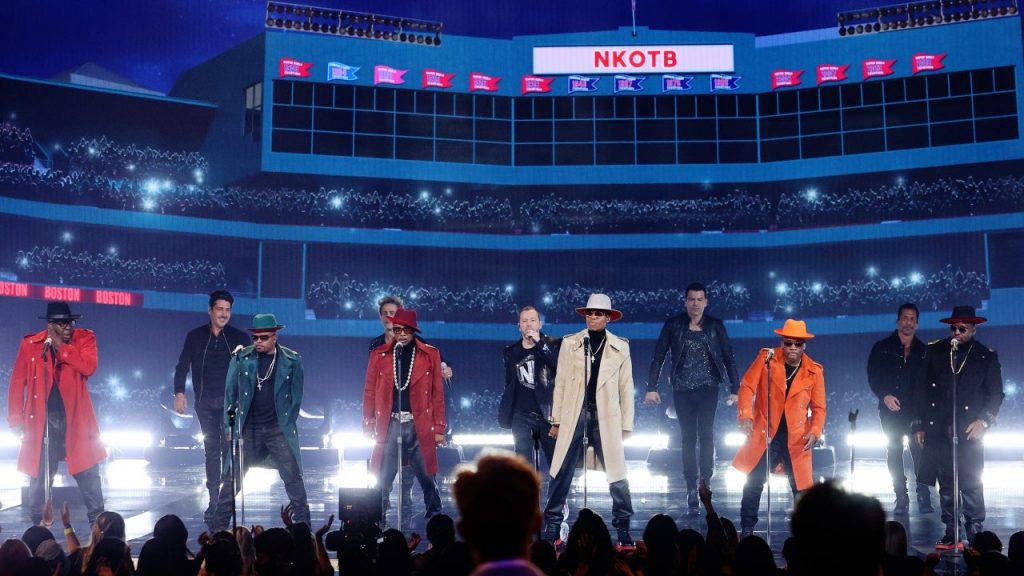 Kicking it old school! For the first time ever, New Kids on the Block and New Edition shared the stage at the 2021 American Music Awards on Sunday. The boy band and R&B group may have been in their heyday in the ’80s and ’90s, but they still rocked the stage at this year’s show.

While the majority of the show took place at the Microsoft Theater in Los Angeles, the groups teamed up for a performance in Boston, Massachusetts, the hometown for both of them. J.B. Smoove introduced the performance, joking that he got beat out by Bobby Brown for a spot in New Edition back in the day.

NKOTB kicked off the performance singing, “The Right Stuff,” and busting out their classic moves in all-black ensembles. New Edition followed with their hit, “Candy Girl.” The singers wore trench coats and matching hats.

It then switched to NKOTB with “Step by Step,” with “Mr. Telephone Man.”

Joey Fatone from *NSYNC and BTS were among the boy banders in the crowd seen dancing along to the performance.

The two groups then joined forces at the end to combine “Is This the End” and “Please Don’t Go Girl,” before New Edition took over again and sang “Can You Stand the Rain.”

NKOTB quickly followed with “You Got It (The Right Stuff).” But the fun didn’t stop there as New Edition also showed off their dance moves with “If It Isn’t Love,” as the other boy banders joined them in the routine.

“It’s surreal,” Donnie Wahlberg told ET’s Cassie DiLaura on the red carpet ahead of the big show. “Being here is always fun, but to be here with New Edition, who mean so much to us and really paved the way for us, and all boy bands. It’s kind of a boy band night, and it wouldn’t be right to be here without the real guys who created the modern boy band.”

While the performance was dubbed the “Battle for Boston,” Joey McIntyre admitted that the groups’ dynamic are more of a “brotherhood.”

“We’ll play along, but we’re having a blast,” he added. “We’re just floored. We were knocked out from day one, because these guys are the best guys in the world, Such heroes of ours. So we’re gonna bring it.”

The performance marked the first time New Edition has performed at the AMAs since 1997. New Kids on the Block’s last time on the show was in 2010. Both groups have won two AMA awards.

After their epic performance, Ralph Tresvant told ET, “It was incredible. It was a moment we’ve been waiting for for a long time…To be up there with the New Kids, our hometown…So to be able to represent out city and celebrate with our longtime friends, New Kids on the Block, it was just a dream come true.”

Johnny Gill was happy to see the crowd getting down, adding when he saw BTS he though, “I was like, yo, what do they know about this?!”

They also shared that this performance was just a teaser for their upcoming concerts. “We’re working right now, as we speak, to getting everything nailed down…We’re on our way. Here we come.”

The 2021 American Music Awards took place at the Microsoft Theater in Los Angeles. It aired live on ABC and will stream the next day on Hulu.