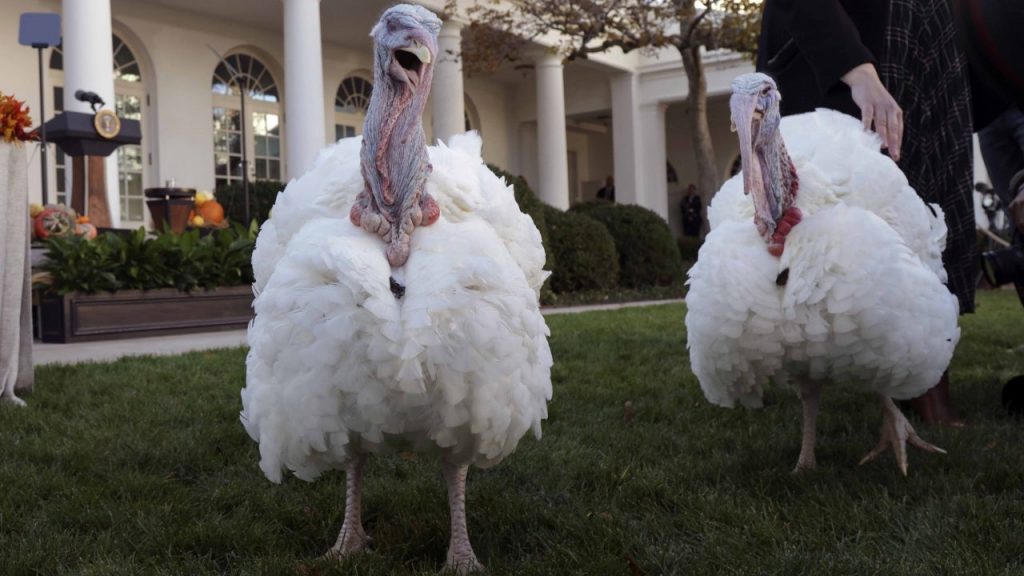 President Joe Biden pardoned turkeys Peanut Butter and Jelly on Friday afternoon in a ceremony at the White House.

“Instead of getting basted, these two turkeys are getting boosted,” Mr. Biden quipped. And he also apologized to Transportation Secretary Pete Buttigieg and husband Chasten, both from Indiana, since it was apparent the two turkeys are the “new Indiana power couple.”

The president even managed to squeeze in an infrastructure quip: “Turkey is infrastructure. Peanut butter and Jelly are going to help build back the butterball,” he said.

“It reminds us to have a little bit of fun, and to always be grateful,” Mr. Biden said Friday of the turkey clemency tradition.

On a more somber note, Mr. Biden said, “It’s important to continue traditions like this to remind us how from darkness there’s light and hope and progress, and that’s what this year’s Thanksgiving, to my view, represents.”

He also took note of the fact that more people would be able to spend Thanksgiving this year with family and friends because of the availability of COVID-19 vaccinations.

“So many of us will be gathered with our loved ones for the first time in a long time. And we’ll be reconnecting with traditions with our tables and our hearts full of grace and gratitude for everyone who made it possible,” Mr. Biden said, taking note of “scientists, researchers, doctors, nurses and other frontline workers who develop administered the vaccines and kept essential services going faith leaders and communities of counsel, comfort and Hill, farmers farmworkers, meat packers who risked their lives during this pandemic to grow process and pick the food that’s on our tables.”

The White House released a video on Thursday introducing the birds, who stayed at Washington, D.C.’s posh Willard Hotel, also as dictated by tradition. Peanut Butter and Jelly both weigh about 40 pounds and were raised in Jasper, Indiana, said National Federation of Turkeys chair Phil Seger. Grower Andrea Welp said raising the turkeys for the presidential pardon was “a lot of fun.”

“With another year of uncertainties with the pandemic, this project has really been something to look forward to,” Welp said Thursday at a press conference.

The president joked Peanut Butter and Jelly were chosen on their temperament, appearance, and, he suspects, their vaccination status.

After they are spared, Peanut Butter and Jelly will head to the Animal Sciences Research and Education Farm at Purdue University in Indiana, where they will live out the rest of their days.

This is Mr. Biden’s first turkey pardoning, a tradition with unclear origins, at the White House. It’s been rumored to date back to President Abraham Lincoln, whose son Tad begged him to pardon the turkey their family had planned to eat for Christmas, and he let the bird go.

In 1963, shortly before President John F. Kennedy was assassinated, he decided to send back the turkey he received at the White House and said, “We’ll just let this one grow,” but he never formally pardoned it. Other presidents after Kennedy participated in photo-ops with turkeys, but not every year.

The tradition is usually credited to President Harry Truman, who did a photo-op with a turkey in 1947, but his presidential library said in 2003 that they had “found no documents, speeches, newspaper clippings, photographs, or other contemporary records in our holdings which refer to Truman pardoning a turkey that he received as a gift in 1947, or at any other time during his presidency.”

Other presidents did photo-ops with turkeys, and the first official pardoning was held in 1989 by President George H.W. Bush. It became an annual tradition after that.

Best TV and Movies to Stream: ‘A Charlie Brown Thanksgiving’, ‘The Shrink Next Door’, ‘King Richard’ and More