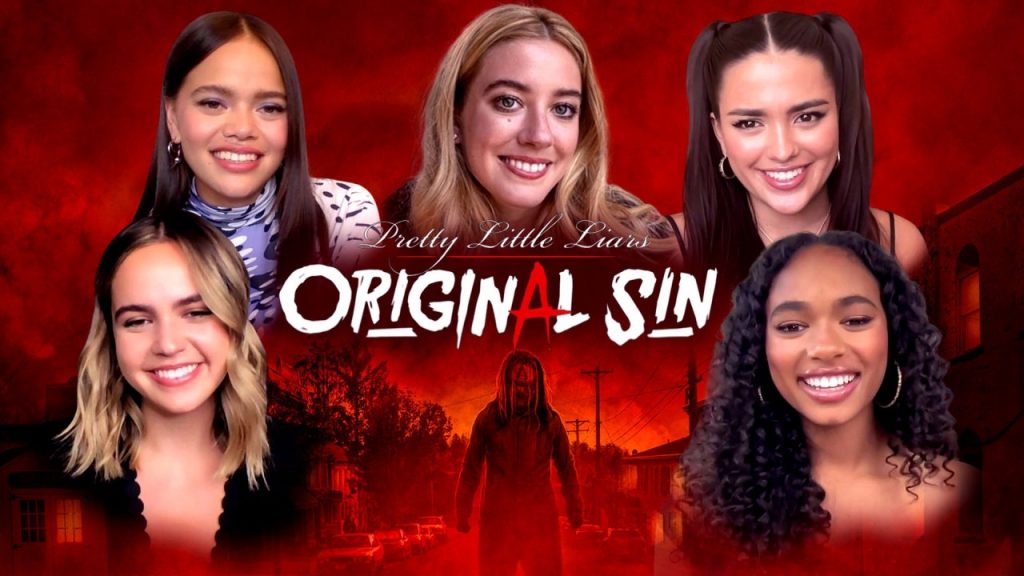 “A” is back and wreaking havoc on a new generation of Liars on HBO Max’s new series, Pretty Little Liars: Original Sin.

The upcoming reboot, which drops its first three episodes Thursday on HBO Max, shifts the focus to Millwood, a small town not far from Rosewood. A series of tragic events 20 years ago almost tore the blue-collar town apart and now, in the present day, a disparate group of teen girls — aka the main Liars — find themselves tormented by an unknown assailant, “A,” and made to pay for the secret sins committed by their mothers two decades ago — and their own.

Bailee Madison, who plays Imogen, shared that she connected with former Pretty Little Liars star Lucy Hale, who portrayed Aria in the original series, throughout the process of getting cast on Original Sin. In fact, after Madison’s casting was announced last July, Hale and fellow PLL alum Shay Mitchell celebrated by leaving comments on her Instagram post.

“Lucy’s a dear friend of mine and was really with me through the whole process of finding out if I got to be a part of the show or not, and just held my hand through every step of the way, which meant the absolute world to me as a friend,” Madison told ET’s Deidre Behar. “And just as someone I respect and have admired her for so many years. I remember being so nervous about the announcement and all of the beautiful ladies sent their love to me, and that meant the world. I know they’re all really excited for us and excited to see what we get to do with the show. That support and blessing means the absolute world.”

“She just wanted me to enjoy it,” she said of Hale’s advice. “I think she was just like, ‘Enjoy every second and trust yourself, which is something that, as a young woman, it can be really hard to do in this business. You have so many outside noises and expectations and she was just a friend at the core and we all need a really good friend by your side. So it meant so, so much.”

Chandler Kinney, who portrays horror film fan Tabby, noted that Pretty Little Liars author Sara Shepard, whose books inspired the show, is “really, really excited for us.” “To feel that love all around for all of us has been huge because we were big fans of the OG and it can be a bit nerve-wracking to step into that world,” she continued. “We definitely feel the weight of the responsibility to do it justice.”

Malia Pyles, who plays Mouse, credited the original PLL cast for receiving them well. “They’ve been so warm on social media, which has been just a blessing ’cause all we want to do is make them proud at the end of the day,” she said.

Co-star Mallory Bechtel, who pulls double duty as twin sisters Kelly and Karen, recalled sharing one of her first looks in character as Karen on social media and OG cast member Sasha Pieterse leaving a comment on the post and tagged her with “this beautiful message: ‘Mean girls are so fun to play. Just enjoy every moment’… I was so, so excited, forgot how to speak! Like, needed Bailee to help me. I’m like, ‘Whoa, what do I say? It’s Sasha!'”

While PLL: Original Sin will lean into the horror elements a lot more than the original series, with the series taking a slightly different take on the signature villain, “A,” the mysterious figure will be a constant threat to the girls as they navigate danger at every corner. The cast, of course, had their suspicions of who “A” was all throughout filming.

“Let me ask you this. Two can keep a secret if one of them is dead,” Madison teased when asked if she knows the identity of “A.” “Which means that’d be real bad for you right now. I just can’t answer that for you. You’ll have to tune in!”

“We were definitely left guessing for a while,” Pyles said. “Our characters had no idea and neither did we as actors. We may or may not know who ‘A’ is, but that may or may not change.”

“We have so many theories. We sat with this information for nine months, so imagine the amount of conspiracy theories that we had going on,” co-star Maia Reficco, who plays track star Noa, told ET. “We also were searching the stage for old drafts to see if we could find any clues. We would go to the stage to see if they were building a new set. And if they were building a new set with somebody’s character name on it, we’d be like, ‘Oh, OK, this is a clue!'”

And yes, they’ve even looked at the main Liars group as potential suspects. “We were like, ‘Is it one of us? Is it anybody in our families? Is it anybody… anywhere?'” Reficco said. “I’m terrified of talking about this because I’m the spoiler one in the group. I spoil everything! I was really sussing Malia out here. I was really sussed about Miss Mouse. She’s really smart. She’s very smart.”

“There are definitely similarities between my character and Mona’s,” Pyles acknowledged, referring to the character from the OG series. “Our show does Easter eggs really well. And to have some likeness has been really cool as a fan again, but I could promise you, I’m not ‘A.'”

Added Bechtel, “A fun theory [is that] Karen and Kelly are actually triplets. This was Eric [Johnson]. This is my dad, the man who plays my dad’s theory. Eric Johnson is who started it but there’s a Katie in the basement! And Katie’s really upset that she’s not able to come into the real world. That’s the craziest one I think I can think of.”

Executive producer Lindsay Calhoon Bring hinted that there are subtle clues sprinkled throughout the show and to pay attention to even the smallest details.

“I’d be remiss to say to not pay attention to our horror eggs and our original PLL Easter eggs. If you’re a fan of the original PLL, I think you will and hope you will love the Easter eggs that really kind of start in earnest about halfway through and push on to the end,” Bring previewed.

“There is so much detail woven through our show. Every frame, every setup was thoughtfully crafted,” Madison added. “Just pay close attention and don’t be close-minded. Allow yourself into the world.”

Added Kinney, “I would say, don’t count anything or anyone out. Or it could send you in the complete opposite direction!”

As for whether there will be cameos from original cast members from PLL, executive producer Roberto Aguirre-Sacasa and Bring played coy.

Zaria, who plays ballerina Faran, promises that the season will be satisfying. “Roberto and Lindsay do a great job at closing,” she said. “They are such pros at story arcs and knowing where something is supposed to end. I think absolutely people will feel satisfied.”

Will the body count be high with “A” imposing their will on Millwood and the girls? Plan on it.

“When we were breaking out the season, believe it or not, we really wanted to do a slow-burn, grounded version. One way of doing that was keeping the body count low at first. I will say that the deeper you go into the season, the higher the body count gets,” Aguirre-Sacasa warned. “By episode 4 or 5, many people you’ve already met won’t be there at the end…. That’s all I’ll say.”