Prince Harry Fact Checks ‘The Crown’: What Other Real-Life Royals Think of the Show 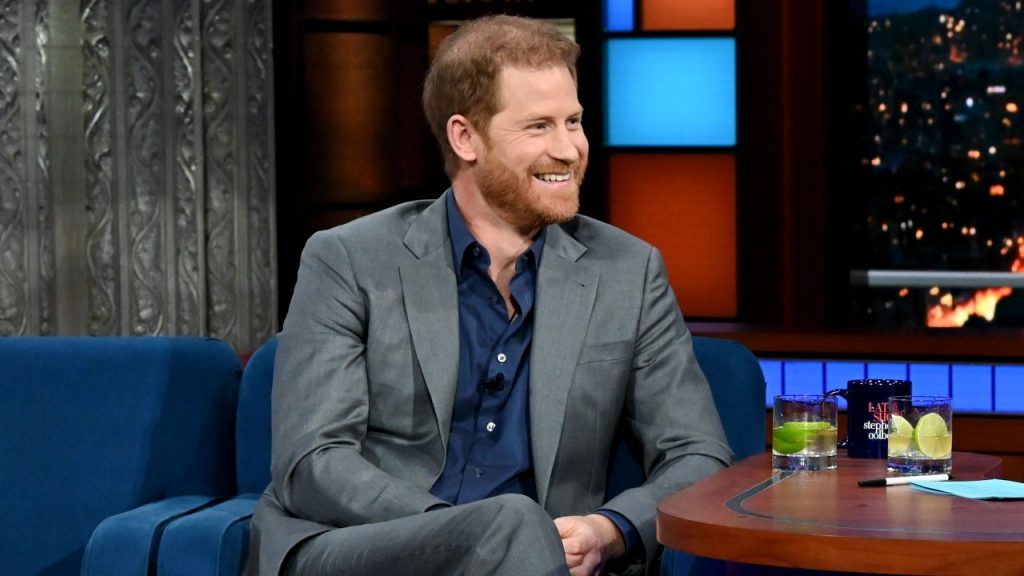 Ever since the first season of The Crown debuted on Netflix in 2016, fans have wondered what the royals think of the fictional representation of their family and some of their biggest life events. Most recently on The Late Show With Stephen Colbert, Prince Harry shared his thoughts on the hit series.

The Crown season 5 has been streaming for several months now, and there have been calls for a disclaimer to be added to creator Peter Morgan’s historical drama that would further clarify that the series is a fictional account of events involving the royal family.

Over the years, there have been stories told about how the real-life royals feel about the program, with some members of the family even speaking out about the wildly popular drama.

Here’s a look at those accounts, starting with Harry’s most recent late-night interview.

While chatting with Late Show host Stephen Colbert in January 2023, Harry confirmed that he watches The Crown.

Admitting to Colbert that he has seen the “older stuff and the more recent stuff,” Harry noted that he facts checks the show. “Yes I do, actually, which, by the way, another reason why it’s so important that history has it right,” he shared.

Also while on The Late Late Show With James Corden in February 2021, Prince Harry candidly spoke about what he thinks of The Crown.

“They don’t pretend to be news, it’s fictional. But it’s loosely based on the truth. Of course it’s not strictly accurate, but loosely,” he said. “It gives you a rough idea about what the lifestyle, what the pressures of putting duty and service above family and everything else, what can come from that.”

Harry further noted that he’s not as bothered by the show as he is by the real-life press his family receives.

“I’m way more comfortable with The Crown than I am seeing the stories written about my family, or my wife, or myself,” he told Corden. “Because it’s the difference between, [The Crown] is obviously fiction, take it how you will, but [the tabloid stories] are being reported on as fact, because you’re supposedly news. I have a real issue with that.”

The Duke of Sussex even offered up a suggestion as to who could play him if The Crown were to reach the present day. Harry suggested Billions and Homeland star Damian Lewis portray him.

Harry’s comments to Corden are a far cry from what biographer Angela Levin, who interviewed Harry for her 2018 book, Harry: Conversations With the Prince, previously claimed he’d said about the series.

“Harry, when I went to interview him in the Palace, the first thing he said to me when he shook my hand was, ‘Are you watching The Crown?'” Levin shared on BBC Breakfast in January 2020. “And I hadn’t been at the time, I felt very embarrassed and I got it and he said, ‘I’m going to make sure I stop it before they get to me.'”

More recently, Dominic West, who plays Harry’s father, King Charles III, in season 5 of The Crown, told ET that he did not reach out to the Duke of Sussex about his role in the series, despite the two being friendly acquaintances.

“I didn’t think it was appropriate to call him up and ask him for tips,” West said. “I haven’t spoken to him for many years.”

Following Queen Elizabeth II’s death on Sept. 8, Matt Smith — who portrayed her husband, Prince Philip, on the first few seasons of The Crown — shared what he’d heard about what Her Majesty thought of the show and recalled meeting one of the royals.

“I met the now-King Charles [III], I told him that he had fabulous shoes … and then I met [Prince] Harry once at the Polo,” he said on the Today show. “[Harry] walked up to me and he went, ‘Granddad,’ because he watched the show.”

When it comes to Queen Elizabeth, Smith noted, “I heard the queen had watched [The Crown], and she used to watch it on a projector on a Sunday night, apparently.”

Matt Smith as Prince Philip and Claire Foy as Queen Elizabeth II in season 1 of ‘The Crown.’Robert Viglasky / Netflix

Vanessa Kirby — who portrayed Queen Elizabeth’s sister, Princess Margaret, in the first seasons of The Crown — also said that she too had heard that Her Highness watched the series.

“A friend of mine was at a party where he didn’t know anyone, so [he] sidled up to a group who were discussing the show,” she explained on The Graham Norton Show. “One of the women said, ‘My granny kind of likes it.'”

The “granny” in question was none other than Queen Elizabeth!

“It turns out, it was one of the princesses. The queen’s granddaughter,” Kirby said, referring to sisters Princess Beatrice and Princess Eugenie. “It’s quite a reliable source-ish — so I’m sure she’s a fan.”

In a 2019 episode of The Graham Norton Show, Olivia Colman, who played Queen Elizabeth for several seasons, recalled an awkward encounter with Prince William.

“It didn’t go very well. I met Prince William at a dinner, and he asked what I was doing at the moment before he quickly added, ‘Actually, I know what you’re doing,'” she shared. “I was so excited and asked, ‘Have you watched it?’ His answer was a firm, ‘No.’ But he was very charming and very lovely.”

More recently, royal expert Katie Nicholl told ET that season 5 of The Crown will be a hard one for William and Harry to watch, should they decide to do so. Their mother, Princess Diana, died in a shocking car crash in Paris in 1997, at the age of 36, when William and Harry were just 15 and 12, respectively.

“I think this series is going to be quite uncomfortable viewing, not just for [Queen Consort] Camilla and [King] Charles but also for William and Harry,” Nicholl explained. “Scenes leading up to their mother’s death are going to be very, very uncomfortable for them.”

“This is a period that they had to live out so publicly. We heard Harry talk about the very real impact it’s had on his life, and William as well,” she added. “So for this to sort of be revisited, even if it’s done tastefully … for this to be brought up all over again is incredibly hard for William and Harry.”

While West did not let Harry know that he was portraying his father, he did get in touch with King Charles himself.

“I just thought I would inform the Prince’s Trust that I was playing the part. And I felt they had a right to know that. So, that’s as far as it went,” the actor told ET.

Nicholl also told ET that she doesn’t think Charles will watch season 5. “We don’t know if the king is going to watch this series,” the royal expert shared. “I can tell you, that he’s watched previous seasons of The Crown and enjoyed it. I think the last series was a little too close to the bone as well.”

Season 5 will focus on then-Prince Charles and Princess Diana‘s divorce. Picking up in the early 1990s, the series will feature the “most visual” era of the royals as they navigated newfound attention surrounding the Palace, which included many headline-grabbing events and scandals of the time, including Charles’ affair and Diana’s “revenge dress.”

“I think that was just such a low moment for the royal family,” Nicholl said of the public back-and-forth between the former couple. “I mean, Charles admitting adultery, and this was the sort of war of the Wales’ being played out in spectacular fashion in the tabloids.”

She added, “I think it’s probably an awkward moment, but whether the king is going to see it, we may never find out.”

Prince Andrew’s ex-wife revealed to Town & Country magazine last year that she reached out to the makers of The Crown to ask, “Hello? Where is Fergie?” The show only gave a brief glimpse of her 1986 wedding to Prince Andrew.

Fergie said she emailed executive producer Andy Harries. “I said to him, ‘Why can’t I help my character?'” she shared with the magazine.

While Fergie wasn’t brought on to consult for the show, she did tell Us magazine that The Crown “was filmed beautifully. The cinematography was excellent.”

In the 2020 ITV documentary Anne: The Princess Royal at 70, which marked her 70th birthday, Princess Anne said that while she does not watch The Crown anymore, she found the early episodes “quite interesting.”

Season 5 of The Crown is now streaming on Netflix.

Dominic West Reacts to Being ‘Too Handsome’ to Play Prince Charles

How King Charles Feels About ‘The Crown’ Reliving Past Troubles

‘The Crown’ Consultant Reveals If King Charles Can Actually Breakdance