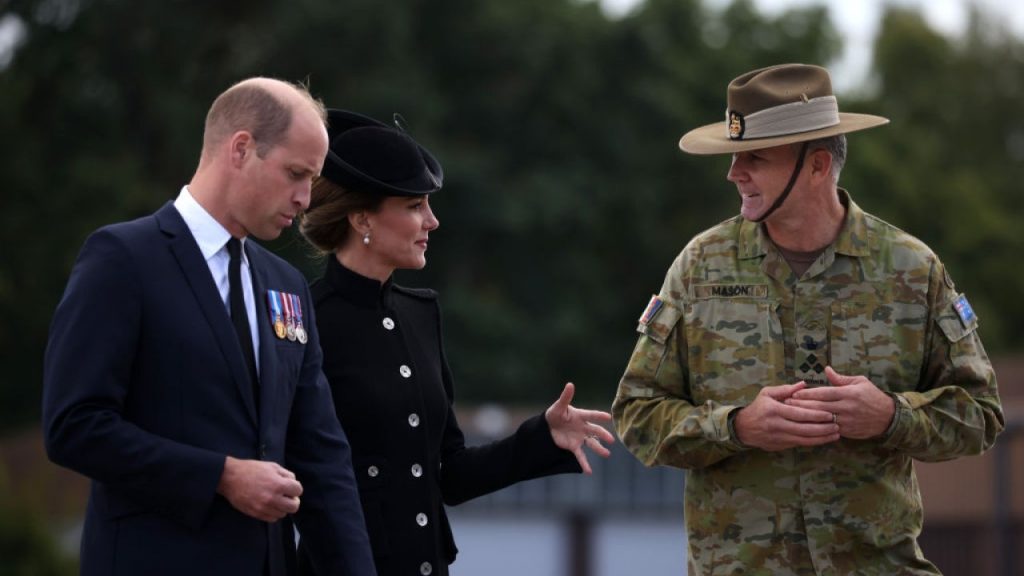 Prince William and Kate Middleton traveled about an hour outside of London to meet with troops from the Commonwealth who have been deployed to the U.K. and slated to take part in Queen Elizabeth II‘s State Funeral.

The Prince and Princess of Wales visited the Army Training Centre in Pirbright, the holding area for service personnel. The facility is accommodating troops in town rehearsing for their roles before heading into London to deliver Ceremonial support to Her Majesty’s State Funeral.

According to Kensington Palace, 28 members of the Australian Defence Force; 64 members of the Canadian Armed Forces; and 25 members of the New Zealand Defence Force are present and will take part in the State Funeral. William and Kate met with commanders and each nation’s contingents. Kate mingled with them as they laughed and smiled during the visit.

The visit comes one day after the royal couple stepped out on Thursday to view floral bouquets, balloons, and tributes of all sorts left by members of the public at Sandringham in Norfolk, England. The outing marked the couple’s first solo appearance since becoming the Prince and Princess of Wales, titles given to the couple by William’s father, King Charles III, after Her Majesty died on Sept. 8.

In photos from the day, William and Kate can be seen chatting with onlookers while collecting flowers and cards. Kate wore a black dress, with a long overcoat, while William donned a black suit.

William and Kate’s out-of-town trip also came on the same day thousands of mourners gathered in the historic London queue to pay their respects to Her Majesty. Among them: one David Beckham, who waited in line for a whopping 13 hours before growing emotional as he walked past the queen’s coffin.

Queen Elizabeth II Funeral: A Guide to Every Event

PrevPreviousWhy Gabby Windey Was Chosen for ‘Dancing With the Stars’ Over Rachel Recchia
NextTom Brady and Gisele Bu?ndchen Living in Separate Homes Amid Rumored Marriage TroubleNext