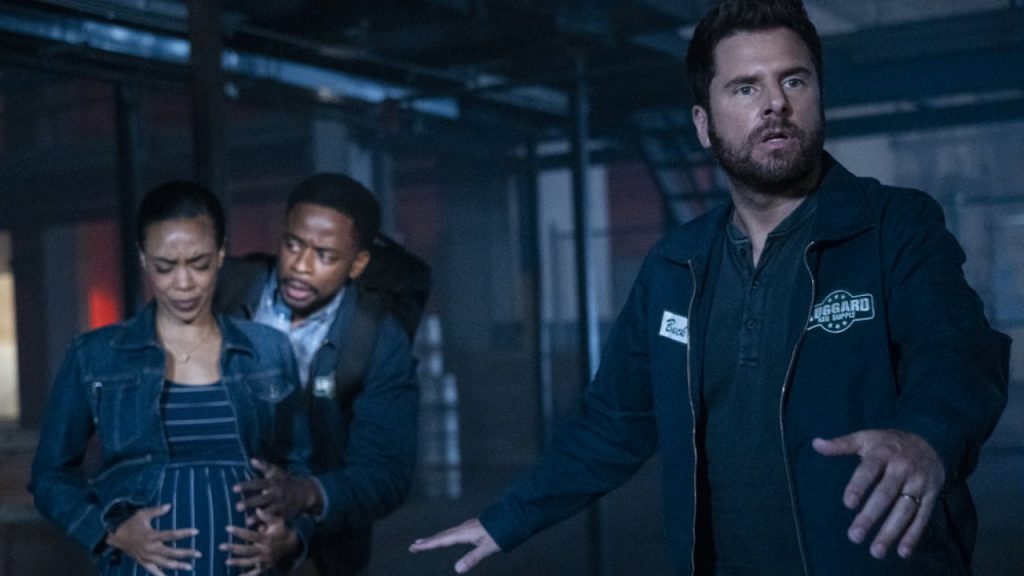 Spoiler alert! Do not proceed if you have not watched Peacock’sPsych 3: This Is Gus.

Burton Guster is officially a married man and a dad!

Shawn’s BFF celebrated two life milestones in one in the closing minutes of Peacock‘s Psych 3: This Is Us, which dropped Thursday, after embarking on an unexpected and often rocky roller-coaster when it came to learning the truth about Selene and her mysterious past. After learning the real truth behind her secret marriage to an ex-partner, Gus and Selene said their “I do’s” the only way they could on Psych — in the middle of the chaos of Selene giving birth to their baby boy. And, of course, Shawn was the one to deliver the baby.

“It was a lot. It was the wildest thing that I’ve ever shot on Psych,”Dule Hill reminisced over a Zoom interview with ET. “We shot it over two days I believe. I’m surprised that [my wife] Jazmyn [Simon, who plays Selene,] didn’t pass out from all of her heavy breathing. I think it was just a perfect culmination of the journey of our show. It’s like we’re going to keep just raising the bar and in that situation, it was just utter ridiculousness, but so much fun to shoot just having everybody come together in that moment.”

James Roday Rodriguez, who co-wrote Psych 3 alongside series creator Steve Franks, acknowledged it was “challenging” to put together that final sequence.

“If you don’t deliver, it’s not going to work. So you either accept the challenge or you risk a relatively disappointing ending to the movie,” he explained to ET. “There was no other option really, but to fully commit. And believe me, there’s stuff that didn’t make the cut that’s even more ridiculous. I mean, we pulled no punches and we left it all on the field for lack of a better sports metaphor.”

“I think we did a great job of finding the balance because you ultimately want that scene to breathe a little and also be emotionally relevant. Amidst all of the craziness and the chaos, it’s still a guide marker for the series. Gus is a dad at the end of that scene and you don’t want that to be lost amidst all the craziness,” Rodriguez added. “We want the fans to be able to revel in that moment and share it with Gus. So I think a lot of the crazy stuff that was funny to watch probably did need to get dialed back a little bit so that the moment that really mattered had the time and space to live as well. That’s kind of the formula that we’ve always used on the show. It’s those moments that buy us the real estate to do all our crazy stuff. So it’s really important to hit those emotionally relevant and resonant character beats so that the rest of the time, we can do all the silly stuff.”

Of course, with Gus now a father and newly married to Selene, does this change things for Shawn and his own relationship with Juliet? While both have been adamant that children are not in their (immediate) future, Shawn’s experience delivering Gus’ baby could be the thing that reopens that conversation in a potential fourth movie.

“I think the characters are old enough now that we can start exploring existential crises and midlife and what are we really doing? And all that stuff that may not sound like super rich comedic material, but can kind of be the thematic that takes us through a movie or two. Which again is just, it’s the evolution of a show that we’ve been making for 16 years,” Rodriguez said. “It’s the natural progression because none of us are aging in reverse. So every time we come back, that’s inherently part of the deal. I think we’ll use it to the fullest and get as much out of it as we can.”

“We also have the options to do time cuts and jump ahead. That’s the cool thing about doing these movies is that we always start with a clean [slate], and it’s like, ‘What’s the most fun?’, which is always the No. 1 mandate,” he noted. “What do we think the fans are going to appreciate the most? Because at the end of the day, that’s who we’re making them for. That’s what’s bringing us back together every time. It’s that relationship with our fans. That’s the blood. That’s the life source.”

Hill, though, was more specific about his personal desires if Psych 4 ever came to fruition.

“I definitely want to see Gus as a dad. I want to see all of his neurosis come on out. I want to see just how detailed he is about everything and how it drives everyone else crazy, especially Shawn. I want to see the interaction between Shawn and Gus because Shawn is definitely the godfather. He’s the uncle, but he’s probably going to be having way too much influence on raising up the child in the wrong way — at least in Gus’ mind, the wrong way,” he said. “I would like to see what happens with Shawn and Juliet. Now that this is happening with Gus and Selene, will they have a child? Will they not? What does that mean for them? What does that mean for Henry? Having it realized or having it not realized.”

“Of course, I don’t know if the story is all written yet on the backstory of Selene. It won’t surprise me if something else comes back out that sends them down along the journey. There’s always something, I feel, with Selene. That there’s another card to be turned over,” he posited. “There’s definitely going to be more to explore in terms of the history of Selene. Maybe the next one is, ‘This is Selene?’ With a question mark.”

Psych 3: This Is Gus is streaming now on Peacock. For more, watch below.

‘Psych’ Is Back With a Third Movie on Peacock