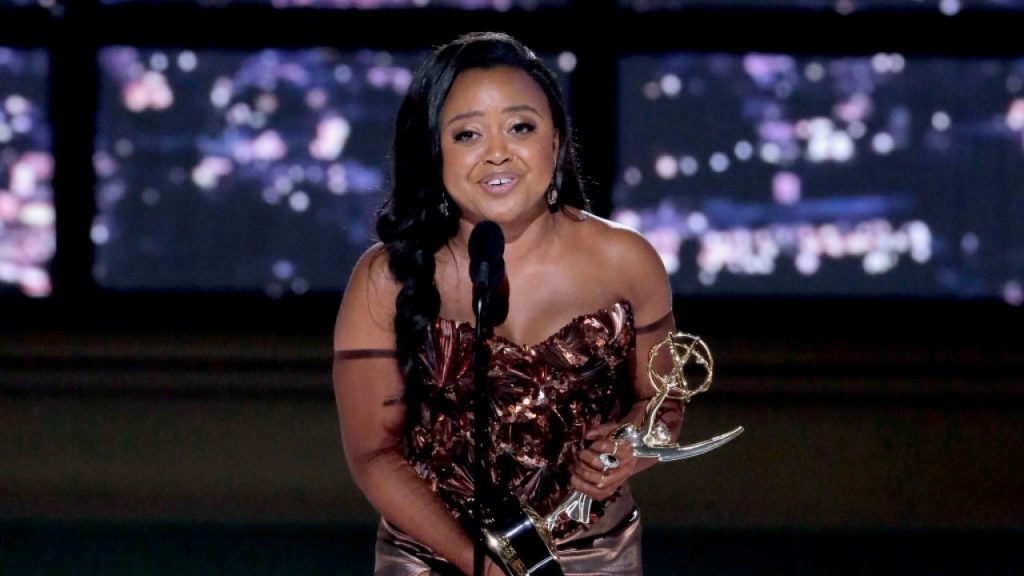 The Abbott Elementary cast continues to prove they’re top of the class! On Thursday, creator, writer and star Quinta Brunson melted fans’ heart when she posted a photo of two handmade cards given to her by younger members of the ABC comedy series cast.

“Congratulations Ms. Quinta B,” one card reads. The other card reads, “To Ms. Janine, Congrats on winning the Best Comedy Writing award as a Emmy. Thanks for having me on your show. I hope you win more Emmys,” alongside a photo of Brunson holding up her Emmy.

“Yeah I love my job,” the 32-year-old captioned the post.

As “Tiny Cowboy” wrote, Burnson made history during Monday night’s award show, becoming the second Black woman to win television’s highest award for Outstanding Writing for a Comedy Series. She was nominated for three Emmys for Abbott Elementary, including Outstanding Comedy Series and Outstanding Lead Actress in a Comedy Series for her role as optimistic teacher Janine Teagues.

Brunson took the stage and humbly thanked the networks that trusted in her vision to tell this story. “I want to say thank you to ABC, Disney, Fox, and Warner Bros.,” she said. “It takes that many people to make a television show. I need to say thank you to Justin and Patrick, my co-showrunners, for believing in a show from four years ago and thinking that it would make a good TV show.”

She also thanked Larry Wilmore, her parents, husband, siblings and the rest of the cast and crew.

The award-winning cast is gearing up for the release of their sophomore season, and during a recent virtual panel for ABC’s presentation at the TCA’s summer press tour, they discussed what it’s like working with kids of varying ages — some who often believe the actors aretheir teachers.

“It’s been really nice to bring them into the the educational process of it all. They add a certain something to this show that you just can’t get anywhere else, because they’re not hyper-professional,” he added. “They do a very good job, but they’re not trying to chart out their careers immediately. We get a lot of really fun energy here. They’re just as responsive in the scenes as we are, and as an actor, that stops it from getting stale. So for me, I’ve never agreed with that sentiment. It just makes you more diverse. It gives us more to play with. I don’t think it’s inhibited us at all in any way, shape, or form.”

PrevPreviousKylie Jenner Hopes Stormi Wears Her Met Dress to Prom: ‘I Save Everything for My Daughter’
NextFall TV 2022: 14 Shows You Should WatchNext