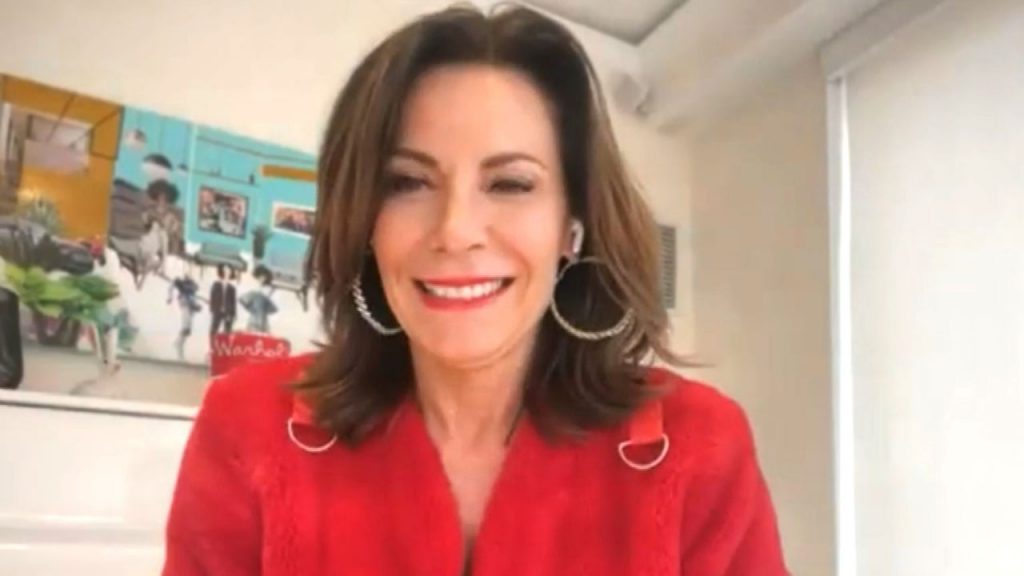 “It was awesome,” Luann cracks to ET over video chat. “It was awesome because it’s like, I’m so used to her behavior that it kind of flies right over my head now. I’m so used to her and the ‘Ramona-Coaster’ that I kind of– I sing about this in my music, ‘The little things can take you down, so it’s best to brush them off. Chic c’est la vie, c’est bonne, c’est bonne…'”

“It was kind of cool to watch the other ladies and how they experienced and digested Ramona,” she continues. “She gets put in her place more than once and, it was just interesting to watch the dynamic between the other women and kind of calling her out on her stuff and from the get go– there were F-bombs on the G4!”

As fans already know (the first three episodes of RHUGT dropped overnight on Peacock), Ramona got off on the wrong foot with just about everyone on the trip, angling for the best room (as she is wont to do) in the shared house, calling The Real Housewives of Atlanta‘s Kenya Moore a “b***h” and by the wrong name (Porsha, as in Porsha Williams, Kenya’s longtime RHOA rival), comparing The Real Housewives of New Jersey star Teresa Giudice to Scarecrow from The Wizard of Oz (as in, she doesn’t have a brain) and taking credit for the success of the entire Real Housewives franchise.

The deluge of bad behavior is not exactly unexpected from the outspoken RHONY OG, but it does pile on to an already embattled time for the 64-year-old. Ultimate Girls Trip premiered just after Ramona found herself in the center of a media firestorm, allegations of racism against co-star Eboni K. Williams, RHONY‘s first Black cast member, making headlines in a number of tabloids. Ramona has denied the accusations, but some viewers continue to question her intentions; the fact that she called a Black co-star on RHUGT the name of a different Black woman (more than once) doesn’t exactly help.

“I certainly hope [she’s watching and learning],” Luann says of her longtime onscreen pal. “I feel like at a certain point you just have to take in what people say and you have to grow and change. Can Ramona grow and change? That has yet to be seen — or that is yet to be seen after we see what happens on the show, you know what I mean? That remains to be seen, I should say.”

Whether fans will get to see that on TV remains to be seen, as well. The Real Housewives of New York City is at a bit of a turning point for the show, going on “pause” for a beat before it enters what Housewives executive producer Andy Cohen calls “repair mode.” The series dipped in the ratings during season 13, which the cast filmed at the height of the COVID-19 pandemic. A good chunk of the season focused on conversations surrounding race, which never seemed to go well (Ramona walked away from more than one discussion). Then, a delayed reunion turned into a canceled reunion, marking the first time a U.S. Housewives series did not have an all-cast, post-season sit-down special.

“We didn’t do the reunion, I was of course disappointed, but I felt like we ended on a good note and then too much time had kind of passed by and it didn’t make sense and whatever,” Luann reflects. “So I’m looking forward to the next season. And then coming back with a strong cast.”

Bravo has yet to say who from the season 13 lineup — Luann, Ramona, Eboni, Sonja Morgan and Leah McSweeney — will or won’t return for season 14, but Luann seems hopeful she’ll be sticking around.

“It’s all speculation,” she says of any shakeup. “I always say that from year to year, I never know if I’m coming back. The show, I think, is privileged to follow my life and I live my life. My life is not the show. And I think you understand that by now. And I think that’s really the kiss of death when the show becomes your life. It doesn’t become interesting anymore. And so, from year to year, I always say I’ll get to that bridge when I cross it, but for the moment, I am very busy, darling, working. And I know we’re going to have an amazing season coming up. And so I’m looking forward to that.”

Luann is also quick to kibosh chatter that she and the rest of the RHONY cast are freezing out Eboni.

That Christmas show is Luann’s latest cabaret tour, A Very Countess Christmas, playing select dates throughout the end of the year. The all-new themed production features refreshed takes on her catalogue of singles, as well as her just-released holiday track, “What Do I Want for Christmas?,” which features the vocal stylings of her season 13 co-stars. The music video also includes appearances from members of The Fortune Society, a charity which helps previously incarcerated women get back on their feet. Proceeds from the single go toward the Society’s endeavors.

“It’s a family show, it’s for everybody,” she teases of the new tour. “I’m selling out really fast and I’m really thrilled about it. Couldn’t be happier.”

For fans who can’t make it to one of Luann’s tour stops, she is hosting a virtual concert experience on Dec. 7, broadcasting live from 54Below in New York City.

Of course, there’s also plenty of Lu to be seen as Ultimate Girls Trip continues rolling out episodes on Peacock.

“I thought it was cool,” she says of filming with other “all-star” Housewives. “I think it’s really interesting to break the fourth wall and to see what really bothers us, what we like about the show, what we don’t like about doing the show. And so it gives viewers another inside look at our lives, and our lives actually being Housewives.”

“What surprised me the most was how as women, we all kind of bond in a certain way because we are doing the same kind of show in different cities and how similar that we are in a lot of ways, it’s not always easy,” she adds. “And I think by sharing our experiences and talking about them, and traveling together and spending all that kind of time together, we really got to know each other better. And we really got to kind of identify with each other in terms of what we all go through as being Housewives.”

Luann says she walked away with new friendships. There’s even a group text with the cast!

“You know, I didn’t know Kyle [Richards] well at all,” she notes of the RHOBH star. “So I thought Kyle maybe was a little snooty and she was actually really not. She was really funny — actually really funny — we laughed a lot. Very down to earth and full of her own issues with being a Housewife, et cetera. And Kenya surprised me because I thought, ‘I’m going to get a lot of shade from this one,’ you know? But we actually got along really well. So there were a lot of nice surprises, because I was most trepidatious, probably, about Kenya.”

The trailer for the season teases plenty of drama ahead, much of which appears to go down on catamarans and yachts. When asked if Housewives should stay off the water (seeing as Luann’s had her own set of rocky experiences on top of RHUGT, with a memorable engagement party and a “boat ride from hell” experience on RHONY), Luann whips out one of her catchphrases: “Never! We got the yacht.”

“Listen, when you have that many women together, there’s always going to be some kind of drama, especially when it comes to being on a boat,” she notes. “It’s a trip like no other Housewives trip, really.”

The first three episodes of The Real Housewives Ultimate Girls Trip are now streaming on Peacock, with new episodes dropping every Thursday. For more information about Luann’s cabaret show and her soon-to-launch non-alcoholic, sparking “faux rose” drink, Fose, check out her website.